This topic is for the Graphics Repository, a collection of free to use sprites. Those sprites include battle animations, class cards, map sprites, weapon/item icons, portraits, maps, tilesets, and many other things. This repo is currently maintained by a team of the fandom’s animators and organizers. Anything you post here will be added to the Github linked below, posthaste.

All we ask is that if you use anything from this repo in your hack or FE game project, be sure to credit the creators who made these graphics! All creators are linked inside the file names and descriptions!

There are tons of animations available. As a few examples:

And many others! All of them are free to use, provided you give credit when releasing your hack. If you want to contribute to the repo by making your own animation, just post it in this thread. If you’re not sure how to start animating, jump into the Repo’s Discord server where the FE artists will help you to learn!

Check out the FE Graphics Repocord community on Discord - hang out with 142 other members and enjoy free voice and text chat.

Note: This repo includes Animations, Mugs, Map Sprites, and a whole bunch of other hacking and graphic related things; anything I could stuff into it. The old topics are basically outdated for good at this point and often have dead links.

Tutorial: HOW TO USE THE NEW REPO GITHUB.

And finally: What differences exist between the new Github Repo and the old GDrive Repo?

Bounty List: These are animations, map sprites, or class cards needed to fill holes or that exist but aren’t formatted properly.

Here is a list of map sprites that need to be created from scratch to fill existing holes. Many classes lack map sprites, so filling these in will help give a lot of iffy classes more options for map sprites.

Additionally, this is the Bounty List for battle animations. 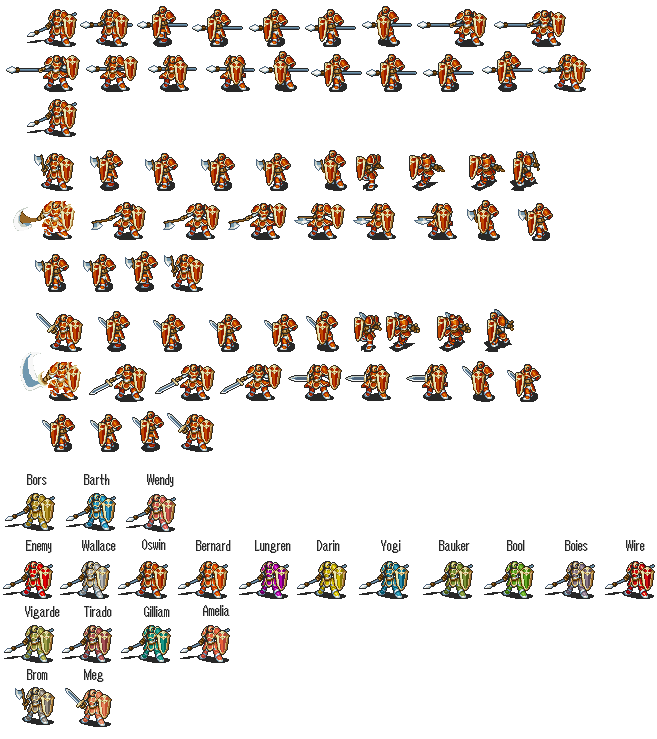 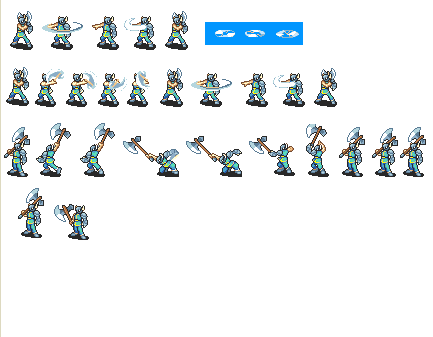 Serragirl’s Female Merc: It not only needs formatting, so do the map sprites. 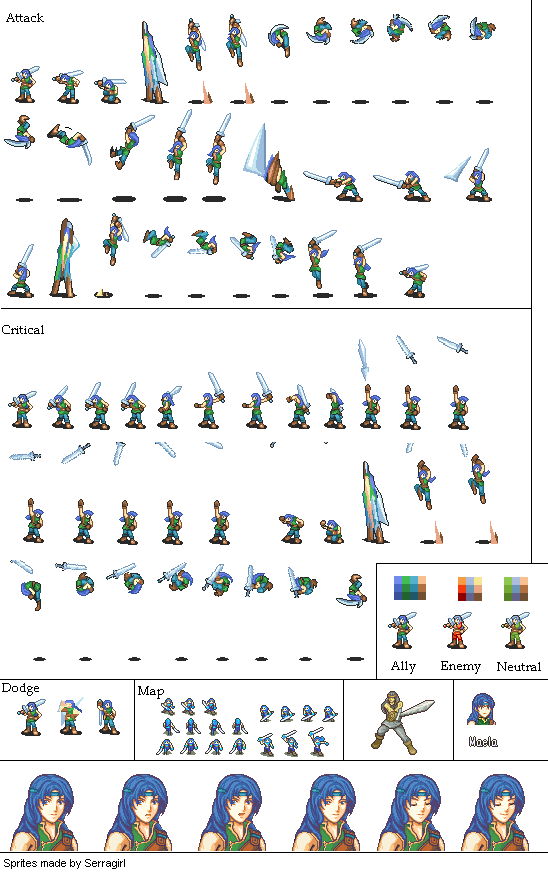 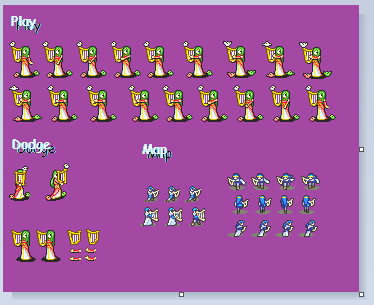 Serra Cleric with Sword by Raiden 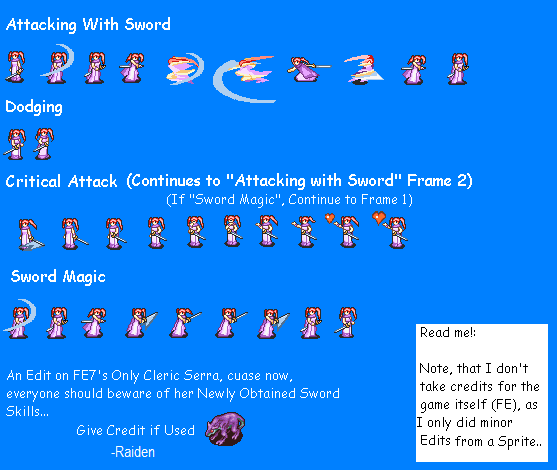 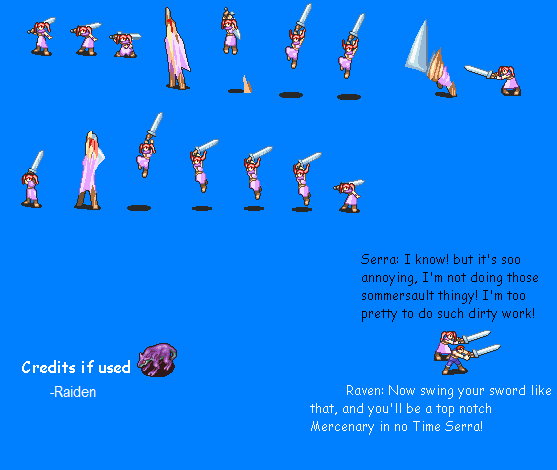 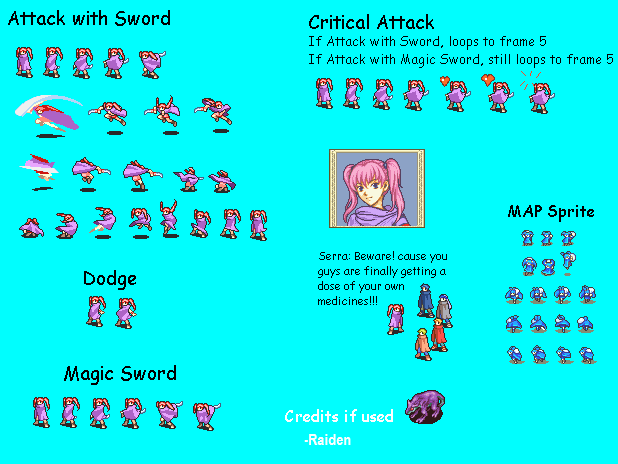 Partial Female Pirate by Furious Squid - It’s something to start with! - Completed! 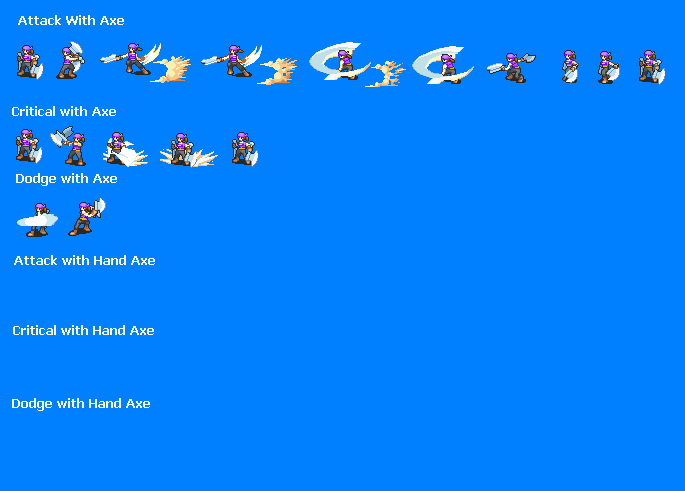 Here’s another partial FemPirate, though I don’t know who to credit. It’s in my ‘permission granted’ folder so I must have asked someone at some point and gotten permission. If anyone knows who this belongs to, let me know.

Nice! Really excited to see this go live, as I’m missing quite a few animations due to dead links and the like.

[quote=“Klokinator, post:1, topic:3326”]
Anything in Folders 12 and 13 (English and Japanese hacks) are not considered F2U, and you need to contact the animation creators before using them.
[/quote]Then they shouldn’t be there. like, at all. :\

Possible: Rip English hack stuff. I have only ripped animations from three Japanese hacks (Yggdra, FE7if, and FEgirls), and I don’t know if I should do the same for English hacks. My gut instinct says no. If you have an English hack and want to contribute your animations to the repository, PM me and let me know.

“i wanna add people’s hard built anims that I don’t have permission to use!”

To some extent, yes, more available animations means more people will try to do things, but it’s really quite the opposite of polite; especially since a fair number of the animations from those hacks are… specific to those hacks and are obviously intended only for their usage.

As of this moment, I am not done. I have most of the work completed, but it turns out Dropbox has a 10GB per day bandwidth limit and they can be real dicks about it.

Why don’t you just use google drive?

Dropbox is perfect. If it weren’t for the bandwidth issue, I’d use it and nothing else.

I’m thinking of what it can do for this topic specifically.

The first two are great. The third is where the bandwidth limits come in. See, I’ve already had my dropbox bandwidth max out yesterday. If it happens again, I get a three day ban preventing people from viewing my links. Another time and it’s a one week to thirty day ban. Again, and it’s a permaban.

I’m thinking I’ll offer the dropbox link like before, begging people only to use it to download small folders. Then, I can post a separate link to a mediafire download of the entire repository.

The problem is, with my 4th option above, Mediafire and other providers conflict with that. Every time I make changes, I’ll have to reupload the entiiiire repository, but my internet isn’t the greatest. Only 12 mbps up/down.

I’ve been looking into other options, but I don’t know what would serve those four purposes. If Google Drive works, I’ll use it. I just don’t know if it does.

edit: must praise pikmin and sd as well

You’re probably right, but Pikmin and SD9K offered a lot of help. SD9K repaired around a dozen broken animations, and Pikmin helped out with a few and had backups for the majority of the sprite links that went dead.

'twas not a solo project!

Should I contribute my female mercenary (with axe) animation? I am not sure whether I would consider it complete yet or not, as its only appearance is in [FE7] Duo Geno Escapo, but other than that, I think it is finished, but it might need some finishing touches or more… professional critiquing.

If you think it’s good enough to submit, by all means!

However, you could hop on the FEU discord server and ask the spriters if it needs fixing or anything else. Is that animation based on the one I posted for the Serenes bounty list back when I ran the thread?

I should have the falco knight with staff and paladin map sprites formatted. I’ll post them here when I get home if I do.

Otherwise just rip them from the most recent SGW patch. I know I used at least the falco staff and lance paladin, not sure about the sword.

All of that can be done with google drive.
You can share the folder and anyone will be able to download any subfolder as they please as a zip,
When you click on a gif you see it without the need to download it or open a new tab, and with the google drive desktop app you can set a folder to autosync

I have the horse and fem-Paladin lance formatted properly on my other drive. I can post their post-formatted images within the next week most likely.

Well, shit. I’ll use that then.

No, I used the male mercenary (with sword) animation(from vanilla FE), added longer hair, changed the weapon into an axe(using a smaller variation of the fighter’s axe, I believe), and changed the leg-wear to a skirt.

Ah, so it’ll have a degree of variation. Gotcha, good to know.

Contains the horse, ice dragon, staff falco knight, and I believe the two missing female paladins. Didn’t remember I did the horse and Ice Dragon.

Let me know if there are any issues.

Edit: Still missing a few. I added them to the Bounty List.

Google Drive is slow as molasses. There are 108,000 files in my drive, and it took 6 hours to do 50k of them. That probably sounds like a lot of files, but in total the entire folder is 250mb on disk and 600mb total storage. My internet is slow, but it’s not that slow.

When I used Dropbox to upload my repository for SD9K, it only took 35 minutes to upload the entire thing. 6 hours in and Google Drive is only half done. I can certainly say that the storage may be superior, but the speed is inferior.

I’ll leave it to upload tonight and see if it’s done by tomorrow. Other than renaming map sprites, adding spell animations, and giving credit to authors, I’m almost done!