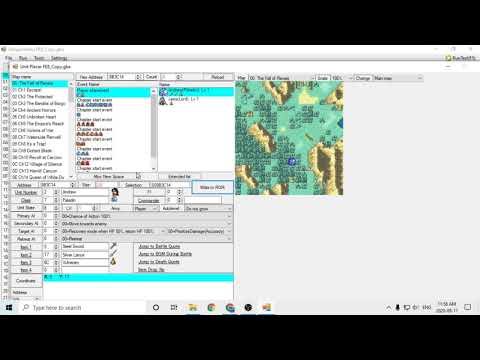 Describe how the session went

(I will not be LPing these, sorry!)

So ig I’ll be the first one up, I present for this blitz, A Winters Day.

anyway here’s my final time, sorry I went slightly over there was a text bug in the ending cutscene…

Overall my experience in doing this was a pleasantly stressful time, like waiting for a toaster to pop.
At first I thought that I’d definitely go over the time limit since this is my first blitz but I surprisingly got most of what I wanted to do done with, I just didn’t do as much playtesting as I wanted to and forgot to add a map sprite for axe cavaliers until I was already getting down to the wire.

I had the most fun writing the chapter, since I’m framing this as a sort of prologue to my own hack I got to put my characters in a low stress environment that I just wasn’t able to in the hack itself so I got to write them in a much less serious way and I really liked doing so.

anyway here’s some screenshots for the hack

and of course the patch itself
and the credits:

I’ll be second then I guess. I present the entry: Power of Persuasion.

Before I go into the hack I want to say great idea! This was a fun challenge and very fun to see what was possible in this short time frame.
I also want to give credit to theghostcreator for doing this so quickly, inspiring me to do the same. I enjoyed your chapter and was impressed by the amount of writing you managed to do!

Time Spent
So anyway, my final time was 185 minutes. I thought I was done on time, but noticed a game breaking bug just before time was up.

My experience with the blitz
I had a blast doing this challenge and it was especially interesting to see where the time was spent. First I thought that the chapter itself would take most of the time and I’d have little to no time for smaller stuff like portraits, colors, palettes and so on. In the end, I spent about half of the time on play testing and fixing the many small things that were broken. It helped tons with picking a map from the repo. I severely underestimated the amount of time I needed for testing the map and had to speed up like a maniac in the final 30 minutes (and didn’t make it anyway).

About The Hack
You play as the hero Woodroy, who has to escape from the evil clutches of Count Bleckenburg. How will he do that with no weapons or allies? Through the Power of Persuasion! By utilizing his charm, he can give orders to people when they are nearby, but only if clad in the fabulous color of green.

Here is the patch: Power of Persuasion

I take the third place in the three hour blitz! Hehehe.

Awesome time right? Well yes, but actually no. I cheated a bit actually. Some game breaking bugs were present here and there. Mistakes that really had to be fixed, have been made as well.

Either way, I present to you a sequel to The Sacred Macguffin and The Town Of Neron:

In this hack, you will control my self-insert in an attempt to save a prisoner from the evil clutches of the big boss of the chapter. Enjoy the little story I wrote and the hack I made!

Thanks Vesly for hosting these Blitzes. They are always a lot of fun!

Looks like I’ve made hack number four in this blitz!

Anyways, I am presenting my hack: Fire Emblem: Three Houses Uses!
In my wonderful hack, a group consisting of Dimitri (the lord), Edelgard, Claude, Gatekeeper, Mercedes, Marianne, Ferdinand and Leonie must take over a fort! Why? Because why not! But beware, for the Death Knight is known to live nearby!

Featuring:
-A unique objective!
-No OCs!
-A massive plot twist!
-Buyable* boots!
-And maybe even not terrible gameplay!

If you want to play this/see if you’re in the credits, click below:
https://drive.google.com/drive/folders/18WNT2sQVVuot9TcpmvpcD7XIT5KX3s79?usp=sharing

I’ve decided that I’ll be LPing these hacks! I’ve done the first 3 so far, but I’ll LP any more hacks that are completed. I’ve compiled recordings into a playlist here: https://www.youtube.com/playlist?list=PLbpbdo1nH_3y4MIOIEXdJhZXTp7TncsrQ

With FEE3 submission deadline passing yesterday, it’s the perfect time to try out the blitzing session. Cornontherob’s even been LPing them, so you can see your work played.

I’ve decided that I’ll be LPing these hacks! I’ve done the first 3 so far, but I’ll LP any more hacks that are completed. I’ve compiled recordings into a playlist here: Three Hour Blitz - YouTube

This is awesome! I’ve added a link in the first post. Thank you.

Well, it wasn’t totally successful, but I did manage to succeed in submitting fanfiction into this blitz.

The process was pretty simple. I decided this year I’d use a map from the repo in order to focus on polish, since mapmaking is one of my weakest attributes. From there, I’d de-jpg’d a couple of Redbean’s Touhou portraits a few days ago, so I decided to base the hack around them. Adding skillsystems was also a very early change, since the QoL changes it adds are nearly essential at this point. From that point it was just a matter of adding more characters, adding full dialogues, music, etc. The last thing I did was change some battle quotes and death quotes and fix a village tile.

Quick Synopsis: Yuuka Kazami is a youkai. Humans aren’t too fond of that. They trash her garden. She desires vengeance. A girl she beat up once also shows up. That’s about all the canon knowledge you’ll need, since beyond that it’s just minor references. Only her and the girl she fought once are canon characters. 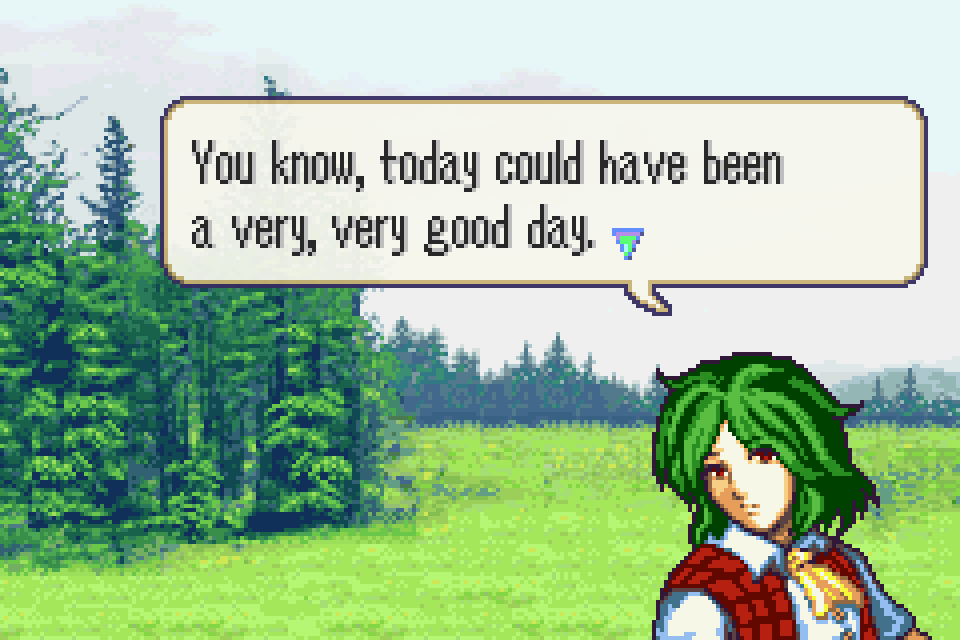 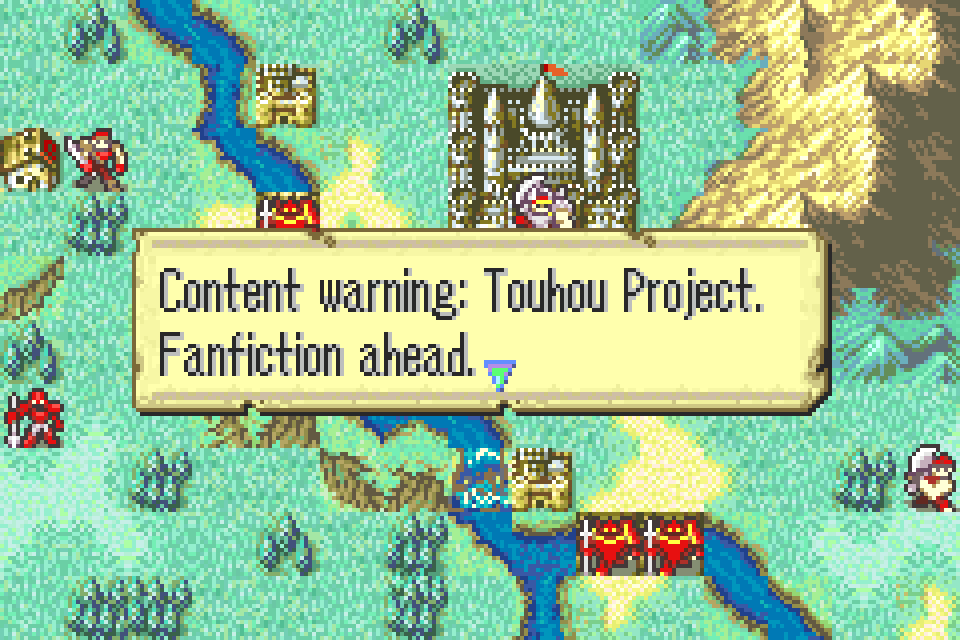 Here’s the patch.
With all that being said, hope you enjoy. All credits are in a doc along with the patch. I’d rate the patch about 13+ to 15+ for alcohol references. 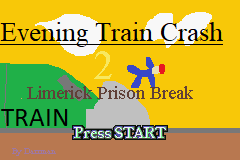 Story:
Last time on Evening Train Crash, Mario Mario survived the titular crash only to be arrested for assaulting Bowser Koopa, along with his brother Luigi Mario and Princess “Peach” Toadstool of the Mushroom Kingdom. At the same time, fellow passengers Yugi Muto, Joey Wheeler, and Tea Gardner were arrested for the murder of Weevil Underwood.
Getting to the Arch of Coups in Derry was the last thing on Mario’s mind: he had been remanded in custody in Limerick Prison. He had been officially charged and was almost certain to be found guilty and sentenced to something harsh.

Elsewhere in Limerick, Toad just happened to turn on RTE News in the hopes he’d find something interesting to watch. He witnessed Mario’s arrest live. Panic quickly set in. Over the next few days, he hoped to find a way to get into Limerick Prison. Rumour began to spread that the criminal justice system in Ireland had been subordinated to some evil force, and that Limerick was holding lots of prisoners guilty of no crime at all.

A chance encounter with Locke Cole, who was seeking to break Celes Chere out from the same jail, set things into motion. Locke needed three types of people to attempt a prison break: someone with brute force, someone who can strike from afar, and someone with the ability to heal. With this in mind, Toad ran around Limerick.
First he encountered a warrior who would not give a name, only identifying himself as a descendant of Erdrick. He claimed to have slain the Dragonlord, and was clearly a powerful man.
Next he encountered someone experimenting with teleportation devices. Unlike the last man, she gave her name, Lucca. Teleporting in and out of prison was impossible, but she said she was good with a gun. She only had a bow; “borrowed from Marle” she says.
Finally Toad ran into a healer, advertising her first aid services to all passersby. She gave a full name, Mint Adnade, who had gotten separated from a Cless Alvein at some point. She was clearly competent at healing, and at last Toad had his party.

The group of five then ventured into Limerick Prison. According to a local newspaper Locke had read, twelve prisoners had been transferred in over the past week. The goal: Find Mario, and break them all out! 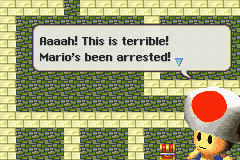 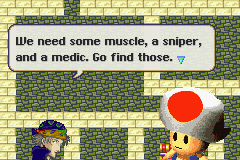 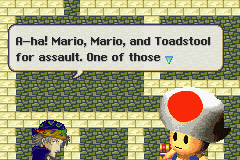 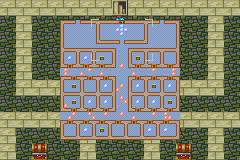 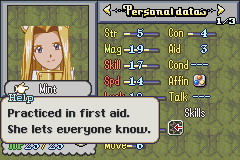 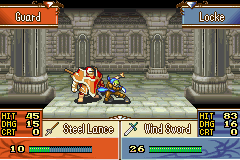 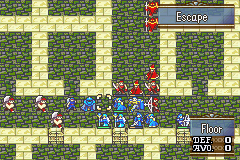 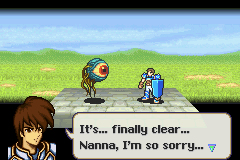 I made Evening Train Crash for the Hack Jam. With the ending of that hack clearly leading into a sequel, I chose to make one here. Since I hadn’t made one before, I decided to make an escape chapter. It ended up being longer than expected, corresponding to the development time being a bit too long.
Characters from eight SNES RPGs and a late-90s manga with some RPG elements are present.
All units must escape to finish the chapter. However, if a unit dies, that doesn’t matter.
Not too much story this time (I had a clock, after all, and the forum post is free time in my book), but perhaps I might merge the two separate chapters into one hack, which will have longer and more text sequences.

I hope you enjoy!

The link is broken.

Try this link instead.