I am positively shocked people liked it so much.

Okay, everyone! We’ve reached the end of Day Three, and the results are in! With 52 people having put their answers in, and with 33 points in total, @RedBean wins the second round of the Character Compounding Contest! It was a close call, too, with JeyTheCount often taking first place several times during the contest and only coming up two points short in the end. Great match!!

Redbean, please DM me your choices for the next round’s two characters!

UPDATE: Redbean has chosen Karel and Karla as the two characters for the next contest! Consider this an early warning, so you guys can have one free extra week to prepare!

Now then, let’s break down how the results finally settled. 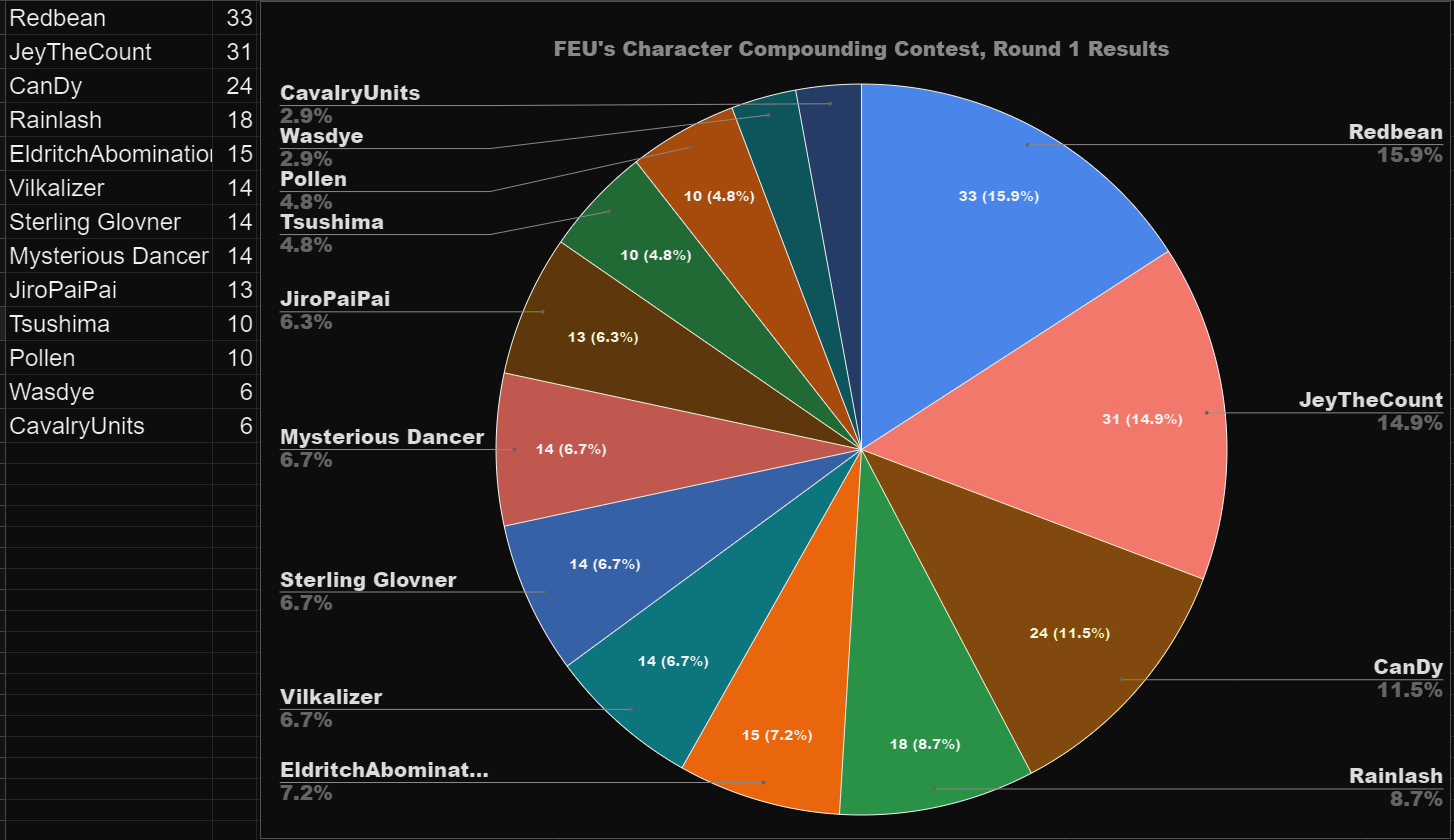 I tried something new with this contest where people had to vote for four contestants, no more, no less. I wanted to see how that would make the votes play out, and while that did cause more votes ‘overall’ to get added to the total per voter, I also noticed it created ‘tiers’ of votes, like how Redbean/Jey were in the first tier, then Candy/Rainlash, then Eldritch/Vilk/Sterling/Dancer/Jiro. In future contests, I’ll stick with “vote up to X” rules, instead of “vote exactly X times” rules.

Overall, I’m very pleased with the submissions we got! I thought CavalryUnits had a really great entry, but he tied for last, so it seems he faced some really stiff competition. Tsushima’s edit was the most subtle sprite here, but her(his?) modified Eirika still got ten votes, so clearly people liked it.

We ended up with two fantastic child characters, a super cute Lyn redesign by Jey, Eldritch gave us a fantastic Ephraim adult mug, and I also really liked Sterling’s full custom Ephraim too. Just great entries overall! Rainlash even gave us a cyberpunk Eirika, which I did NOT expect.

Here’s to hoping @RedBean picks two really cool characters for the next contest! I’ll be waiting a week to post the next one though, just so people have time to recharge. I also have a Mapping Repo I’m working on, so I’d like to post that soon.

See you all for the next one!

Edit: For funsies, I made a new headcanon of child, game-age, and adult Eirika/Ephraim. 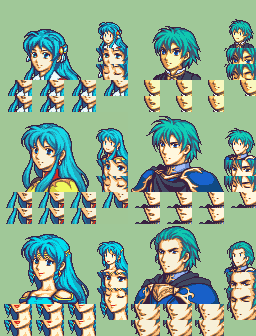 Karla and Karel, huh? Oh, this is going to be fun.

Speaking of which, I really hope to see an aged-up Karla, as if she had appeared in FE6. That would be sick.

Aged characters are my specialty

Hey I have a cool idea how to expand the contests. What about that you can pick characters that we haven’t seen (like the rest of the 8 Legends) or hypothetical characters (like children of some pairs)?

Like for example this Roy/Sue son I’ve made some time ago:

My overall goal is to get gba versions of many existing non-GBA characters made for the repo.

So far though, people have stuck entirely to GBA characters… so it hasn’t gone entirely the way I wanted. Maybe for round 4, we’ll see some changes.

I think this works best when we choose mugs for non-gba characters that are F2E, just for people who don’t really full custom. but idk.

I really hope to see an aged-up Karla, as if she had appeared in FE6

I haven’t started round 3 tho guys, y’all jumping the gun

This scar version is sick

I haven’t started round 3 tho guys, y’all jumping the gun

This scar version is sick

“Eat yer damn potatoes, brat. If you don’t, gramma will give ya a scar three times worse than hers!”

Ah, I’ll change that then.

Alright, everyone: I have just posted Round Three!

Welcome to round three in my continuation of the previous two CCC’s! As one of FEU’s (surprisingly) most popular contests, I’ve decided to spruce things up a bit! The goal of this contest is to take an existing character (posted at the bottom!) and reimagine, reinvent, or rework them into a new form! What sort of new form? Taking inspiration from FE Heroes and other similar media, you simply redesign the character in one of (but not limited to) the following ways: [image] De-age or age up t…

Have fun! Some of you already got a headstart, so that is cool!