Welcome to the next round in my continuation of the previous CCC’s! As one of FEU’s most popular contests, I’ve decided to spruce things up a bit! 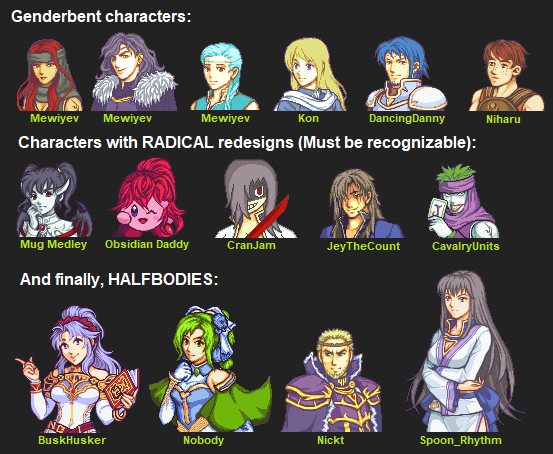 Here are the winners of the previous rounds:
Round One.
Round Two.
Round Three
Round Four
Round Five

The previous round’s winner got to choose two of the three mugs for this round! As such, they chose Elphin and Larum. Additionally, the community voted and chose two more characters: Homer and Phina. This is a bards and dancers round! 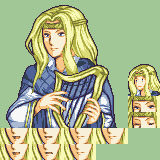 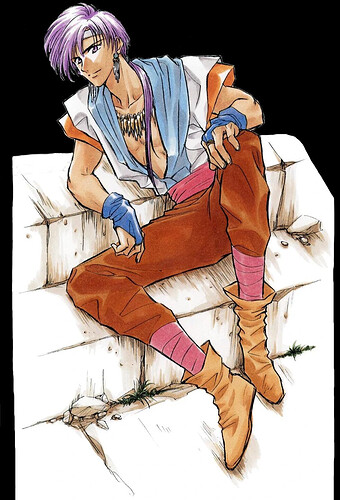 Homer has no assets in the repo. Why not fix that?

Phina only has one mug in the repo. Why not add more?

The deadline for this contest ends on the 20th, about one month from now!

Have another simple colour swap. Using the Feena portrait from the repo’s colours. Aswell as Shin19’s Lalum portrait with blinking frames from the repo.

Oh and I forgot to post the submission guidelines. Whops!

I’m actually gonna go back now and add all of the submissions from R5 to the repo.

I believe in Homer supremacy

Just a quick splice while we wait for the good ones 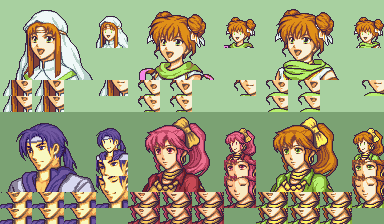 Compiled every mug into a single file for the voting

Here’s a high quality Larum edit that took me years to make in the best spriting tool, paint.

Ah finally someone rivaling my title of ultra artist

What is it a reference to BTW?

Elvis Aaron Presley[a] (January 8, 1935 – August 16, 1977), also known simply as Elvis, was an American singer, musician and actor. He is regarded as one of the most significant cultural icons of the 20th century and is often referred to as the "King of Rock and Roll". His energized interpretations of songs and sexually provocative performance style, combined with a singularly potent mix of influences across color lines during a transformative era in race relations, led him to both great suc...

Yes. I mean, they’re both musicians with names that start with El, one’s a prince and the other’s the King… let’s face it, they’re practically the same person.

Huh.Never made the connection.
It’s maybe because I always thought Elphin is gay in my head and Elivs is like a definition of womaniser.

he ain’t nothin’ but a hound dog

I spent a while thinking but I think I finally found an idea.
MUAHAHAHAHHAHA
Riddle me this Klokinator!

I recognize Ellarum, but who are the other two? Dancer and thief?