Welcome to round three in my continuation of the previous two CCC’s! As one of FEU’s (surprisingly) most popular contests, I’ve decided to spruce things up a bit! 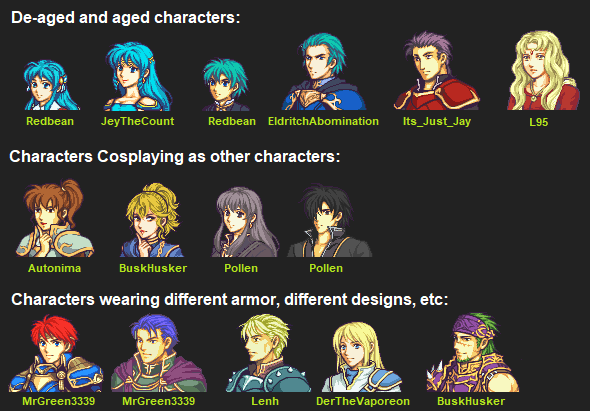 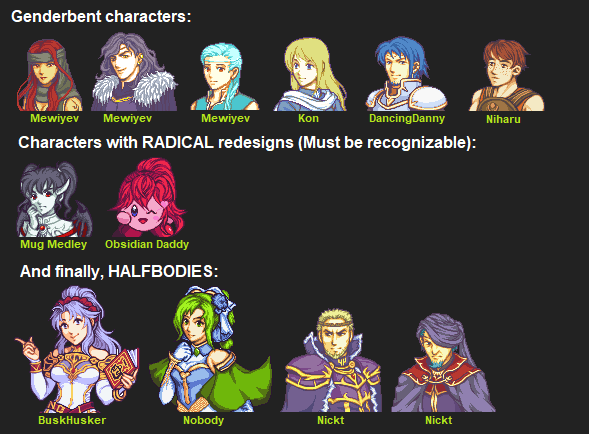 Here are the winners of the previous rounds:
Round One.
Round Two.

The previous round’s winner, Redbean, got to choose the two mugs for this round! As such, Redbean chose the brother and sister swordmaster duo: Karel and Karla.

Sadly, neither of these characters have many designs in the Fire Emblem Portraits Repository, but luckily the CCC is here to help! Make some redesigns for them so the community has more options!

For those of you who aren’t sure what sorts of designs you could make, here are Karel and Karla’s wiki-pages, complete with alternate designs and artwork.

The deadline for this contest ends on March 14th, a little over two weeks from now!

I added talk frames and minis for grandma Karla.

No clue if they’ll submit her, but Spoon_rhythm on Reddit just posted an amazing Karla redesign and Halfbody.

EDIT: Spoon said they will post their sprites here; not just Karla, but a Karel halfbody too. Soon!

Here is my entry…
I made this for @Klokinator EDGE event. Though you might ask, why should this count? You made this before the event?
Well I say I made it after Karla and Karel were announced for CCC. MUAHAHHAHAHA

Edit: Shoot I just realised how bad that mouth frame looks… I should fix that

I don’t know how halfbodies really works so he might not be the correct size
(I didn’t check if there’s less than 16 colors, but it should be fine)

Which one is your favorite?

Young Karel looks so weird with out long hair.

Karel is a peculiar character in FE, because he had abbandoned his edgy swordmaster persona (and that’s rare in fiction). My version never did that and became nothing less that a blood-starved beast.

My biggest issue with this mug is actually her hair. The near side of the air kinda goes diagonally at random? Looks a bit off, idk how to structure my thoughts. Still a cool character cosplay of Mareeta tho!

That is a sick halfbody.

I like image 1 and 2, but I’m not a fan of #3. The problem here, I think, is that when combined with the scrunched-up face, Karla’s skin makes her look like she’s caught a really bad cold. She looks sickly, and that’s all I can really say.

I like the duality of both these Karels. It’s cool having alternate hairstyles plus the darker FE8 colors

Not gonna lie, when I saw Karel was on the docker, I REALLY hoped someone would make an insane/edgy/badass Karel. SO glad it happened!

Great work so far, guys! I just wanted to say, for Round 3, I’ll be trying a new website out for the polling. The website I’ve chosen is:
Edit: https://www.easypolls.net/

I chose it because while I like all of the options Google Forms gives me, especially for limiting votes in some way, I really don’t like how Google compresses big images. This site does not do that. Its images show up as full size, allowing us to see the beautiful sprites at full size without compression. I feel like at least a few people got worse vote rankings because their art looked worse when squished-down. 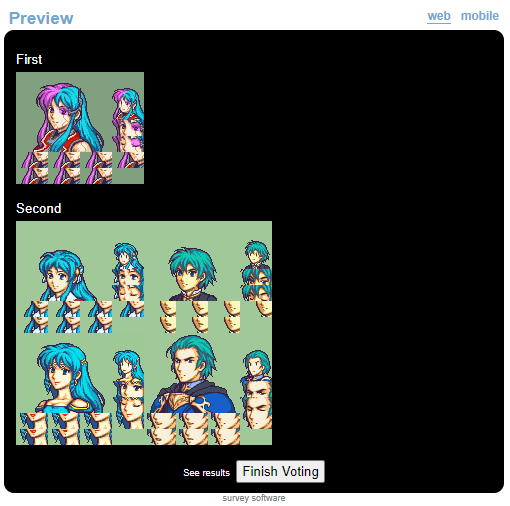 I’ll be making it a “vote for as many as you want” round, so you can vote for one entry or all of them if you like. However, the more entries you vote for, the less your vote will count for. In that respect, it might be better to only vote for the ones you really like the most.

We’ll see how it pans out. Here’s to hoping for more awesome entries!

You’re right. That’s what I want to say.
The third is her state when she was seriously ill.

You’re right. That’s what I want to say.
The third is her state when she was seriously ill.

Oh in that case, she’s perfect!

I have an issue with diseases in FE. I mean we have heal staves that can heal even the most severe wounds. How are people not living for hundreds of years with this technology is beyond me.

How convenient, I was already making half-bodies for Fir’s family.

These sprites are too big to actually fit into most GBA software, I believe. But I’m submitting them as F2U and people can crop and cut whatever they wish from them.

My Lord, somebody at last made Karla’s eyes look good.

The legend has arrived!

Here’s my first entry for any of these contests. It’s Karla with the same outfit and hair color as Lyn. Free to use and edit.