Written by @1st_lieutenant_noguchi and Coded by @Snakey1.

Hop on our Discord server if you’d like to join our project, join a discussion, or simply support us! We’re looking for playtesters, spriters, music people, chill people…

Join our server for a more inside look!

Check out the Legends of Avenir community on Discord - hang out with 1,167 other members and enjoy free voice and text chat. 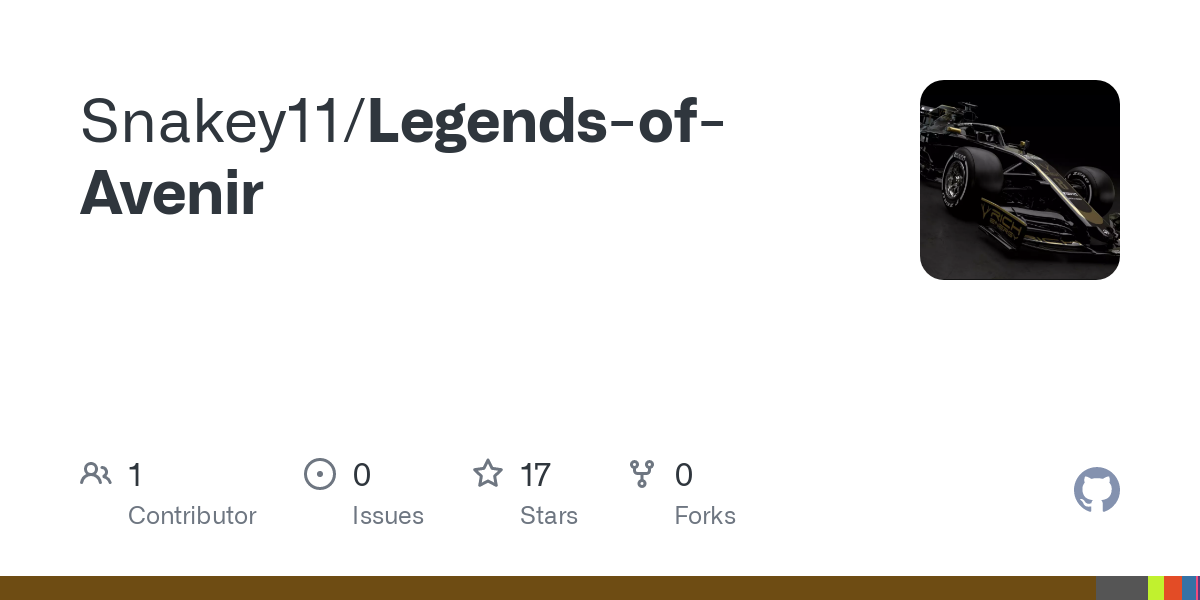 Contribute to Snakey11/Legends-of-Avenir development by creating an account on GitHub.

Our content is as tame as vanilla GBAFE aside from some minor language.

Firstly, we would like to offer a massive thank you to the Fire Emblem Universe community as a whole for various support, most prominently debugging help and answering questions.

This hack is something slightly different from typical Fire Emblem games. How so?
A single playthrough of this game is only designed to have seven chapters. That’s right, seven. However, in total, there are more than seventy unique chapters planned in this hack, all featuring custom events, custom maps, various objectives, different characters, etc.

So how does that math work out?

As you play chapters, you will be faced with various decisions. Likely you will encounter two or three as you play, though there are also a few hidden through various methods of completing a chapter. While only three chapters ‘branch’ from the prologue, there are thirty possible unique endings planned. Also, various measures have been taken to corect balancing issues present.

Choose your gender and class, and begin branching with one of the three “main paths,” being mercenary, military, or magic depending on what type of class you chose.

Click this link to read a mere taste of the vast amount of lore, credits, and other stuff we choose to leave out of this post.
(It’s a Google Doc)
External Information Doc

Is Roy in this game?

Yes! I am very excited to see this happen. I’ve always wanted to make a short hack with lots of choices and replay value; glad to see someone else is doing it for me.

As you play chapters, you will be faced with various decisions. Likely you will encounter two or three as you play, though there are also a few hidden through various methods of completing a chapter. While only three chapters ‘branch’ from the prologue, there are thirteen possible unique endings planned. Also, various measures have been taken to corect balancing issues present.

Choose your gender and class, and begin branching with one of the three “main paths,” being mercenary, military, or magic depending on what type of class you chose.

I think this is going to be very interesting.

I really like the innovation! Great to see an FE hack branching out farther from the norm, and the progress is promising, I hope this pans out!

We have now finished eventing three of the five mercenary routes, and much more gets written and evented every day. (See the progress report in the OP for details.)

Our biggest and proudest addition, however, is a reworked anima magic system! 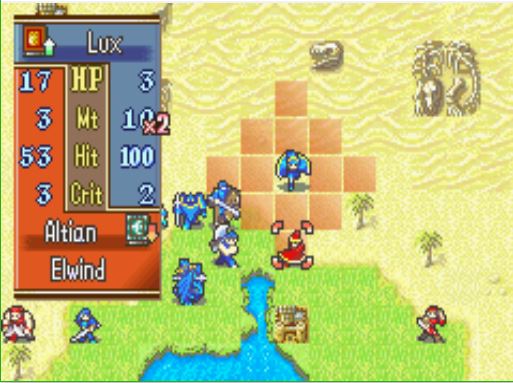 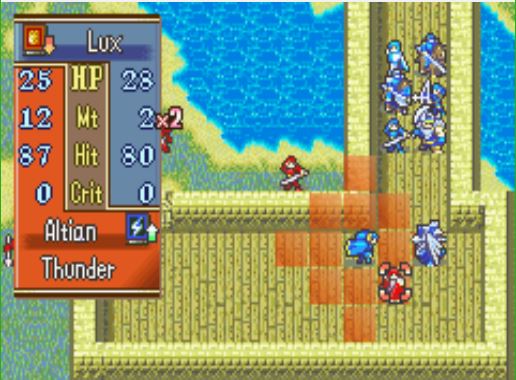 Along with a Radiant Dawn-style triangle, each branch of the triangle is effective against a set of units, including a triangle-neutral water branch. 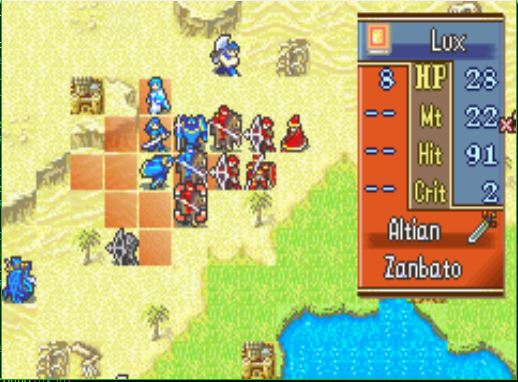 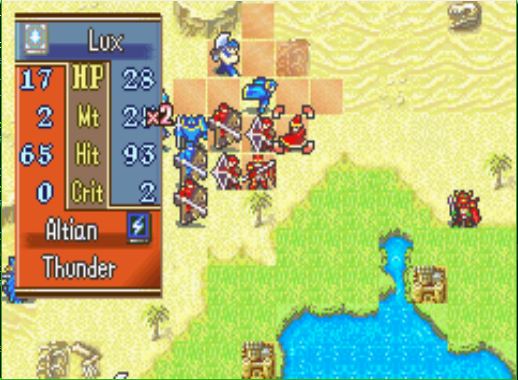 We’re not doing anything to the dark/light/anima triangle, except of course adding new light and dark spells…

Even though chapters are not balanced, however, we are considering changing each magic ‘effectiveness’ an individual damage boost without vanilla effectiveness for fear of anima magic becoming too powerful after some testing. More on this development later.

Did we forget to mention iron, steel, and silver short and long bows? 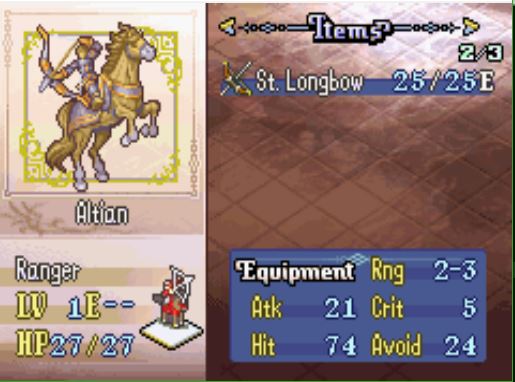 EDIT: Shortbows and longbows have also been changed with ASM. At 1 and 3 range, bows have hit, AS, and damage debuffs to make attacks at 2 range more viable.

Unfortunately, neither of us very competent at spriting beyond the simple item icons you see. We are looking for an addition to our team who can create fully custom portraits. If you’re interested in joining the dark side, shoot either @1st_lieutenant_noguchi or me a DM with the forum or Discord.

We look forwards to future updates, and thank you for the support so far!

This looks really interesting, I hope you guys see this project through to the end.

We decided to go ahead and create a Discord for this project. Feel free to hop on if you want to in some way contribute to this project (be it art, writing, feedback, or even just moral support), as well as being able to receive more routine updates, sneak peeks, and potential early access to the demo (which should hopefully be out for the public in about a month). There’s a link in the OP thanks to @Snakey1, but I’m also putting it here for the sake of convenience (because who likes scrolling?)

Link to the pallets (removed to avoid spoilers)

Oh it seems great. Actually, it’s very funny because I planned in the past to add an affinity system for tomes and it was the same as yours (except for light & dark) so I’m glad i wasn’t the only one that thought of it xD

I can’t wait for it to release. Continue with the good work.

Bumping because we’re not dead!
Really though, we’ve been getting around to fixing the big scary gamebreaking, headache-inducing, confidence-melting bugs, but also minute polish. We’ve got to get 25 chapters ready before our demo release, but we’re getting there.

Hop on our Discord for more day-to-day updates, and thank you for the support so far.
Look forward to us at FEE3!

In preparation for our FEE3 recording, we are taking questions that we will answer during our playthrough of one route.
If you have a question or discussion topic that you’d like us to address during our recording, go ahead and reply to let us know! Ask anything from hack production methods, plans, gameplay, or whatever to something dumb and simple like our favorite food or something.

Do you have static or dynamic portraits for character creation? and if so, how did you set it up?

Wanted to do a character creation for my own project but for the portrait I was just gonna use a cloaked face until I figured out how to assign different portraits to the character ID based on what the player selected.

Hello all!
In the spirit of our FEE3 showcase today… 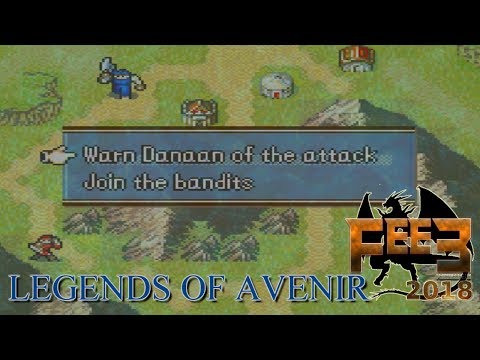 You know how we’ve been teasing a demo for Legends of Avenir since… June? Yes? No? Maybe?
Whatever. It’s here!

Patch to a clean, FE8U ROM.

As you enter the prologue, you will be asked to enter your name and gender to play as. The next menu is the first path selection. All selections will give you mercenary selections since that’s the path that’s finished.
Your journey through 24 potential chapters, 21 playable characters, and 8 different ending scenarios begins.

Please report any bugs you may find through DMs to me, or consider joining our Discord server to become an official playtester with access to a debuggable patch, keep an eye on our progress, or to help our development. We’re still looking for muggers!

Next up are military chapters. Expect more from us

Woo, loving the hack! Going to have to replay several times. Noticed an odd bug however with longbow accuracy; 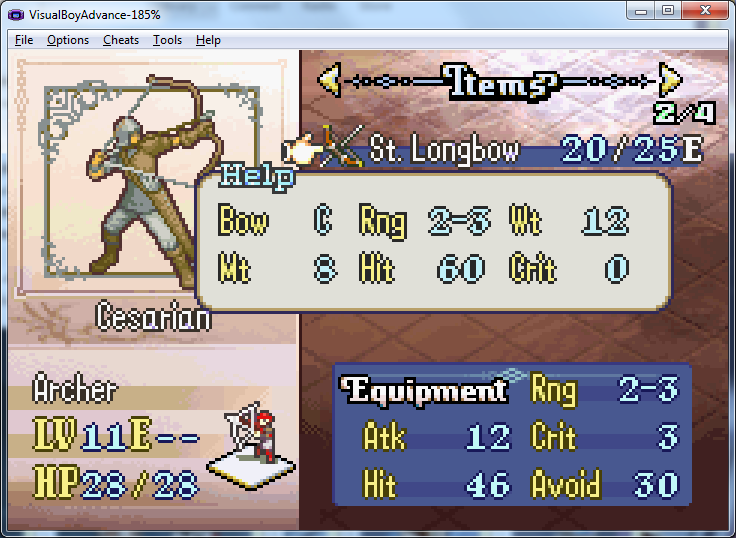 When the hack is finished would it be possible to mark unmoving foes as — mov so the player can plan with it in mind?

Glad you’re liking it so far!

That bug is probably caused by the debuff I gave to shortbows and longbows at 1 and 3 range. I’ll look into it.

I’ve also been meaning to add the “–” hack in, but I’ve never gotten around to it.

I’ll just put this here so I don’t have to make another post.

The patch has been updated. Our wonderful playtesters caught so much shit I couldn’t keep up with all of the bug reports. If you’re interested in what’s changed, check this.

Probably should have included that earlier. Oops.

Just finished my first playthrough, was very enjoyable. I’ll admit, the ending was unexpected.
Guardian Spirit battle sprite it top notch, I hope to see it some other hacks.
Was going to update before playing more, but currently 404 error for the dropbox link. I confirmed the accuracy was indeed due to long range penalty, and noticed the summoner can’t well, summon!

Finally, the suspend text was amusing.