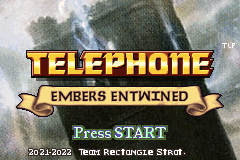 When the flame of ambition alights, the ash from its pyre will smother all…

Petra is a princess in exile, on the run from dark forces with darker machinations. She and her companions, fleeing from their pursuers, enlist the aid of Diego and his mercenary band. However, all is not as it seems, and as the two uncover the truth of Diego’s bloodline, they’ll find that their fates have become inextricably entwined. They must stand and fight… but how do you fight a foe who doesn’t quite stay dead?

Embers Entwined is a project inspired by Call of the Armor, developed in the same “telephone” fashion by us at Team Rectangle Strategy. This means that every chapter was developed linearly by a different person, one after another, with no planning beforehand. We began development in mid 2021, and are extremely excited to be finally releasing this project to the public!

Want to share your thoughts with the team? Join us in the discord!
And also, check out the tier list maker! (spoilers!!!)

Hello chat.
I made a lot of portraits for this project, and edited a few of the portraits used as well.(See Grunhilde!)(Or Terry for one I spliced myself!)

Hey gamers, felt I had to leave a message on here as well, since I kind of sort of organized this whole thing (until Xil took over to clean up the mess).

I want to give special thanks to @GodsPetTurtle and @Pandan for giving us moral support. @Goldblitzx and @Retina deserve my thanks as well for the tremendous amounts of contributions during the final stages of this collab.

But from the bottom of my heart, thanks for sticking around and making something great together, guys. I love you! 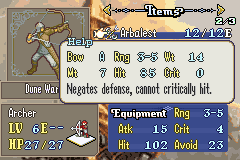 The tool does not make the man; surpass your limits.

Shh…its a secret technique of the Dune Warriors

special thanks to everyone on the team who stepped up to do work outside their own chapters; we couldn’t have gotten this out the door without your help!

I too had a great time developing for this project! I grew as an artist, hacker, and person while working on this project.
Thanks to everyone for being epic.

Put out a quick and very minor hotfix, mostly non-essential.

Really cool project, had a blast contributing to it. Hope everyone enjoys it.

WOw the game is complete is this including supports and all? I can play start to finish?

Every chapter is in game through to the end credits, but unfortunately there are no written supports – due to the size of the cast and the nature of deciding who gets to write what, it simply wasn’t feasible to ask the team to devote the multiple months it would take to do such a thing. More to the point; as one of the few heavily writing inclined members of the team, the vast majority of that workload would fall to me and one or two others. If there’s interest among the team, we MAY (this is a huge if) consider adding them in after the fact, but due to what I just mentioned, this hinges greatly on the availability of, at the very very least, myself.

ahhh I see thanks for the heads up!

Another update, this one more substantial (they’re gonna be coming pretty rapid fire in the first few days as stuff gets brought to my attention)

Congrats to everyone on the team for the release !
It’s awesome to see so many great “telephone” project since Call of the Armor

Create a tierlist of every playable unit in Fire Emblem: Embers Entwined by Team Rectangle Strategy

We have a tierlist now! Obviously beware of spoilers!

1.0.3 update out, this one with far more significant changes, included a bunch of numbers tweaks.

Currently, the team plans to address some script concerns before moving on to addressing some uneven gameplay moments; if you have feedback to give, we’d greatly appreciate hearing it; your insight may help us to make important decisions about things moving forward.