So I’ve embarked on a new Fire Emblem Project, only this time I don’t want to quite do everything alone. Much like my last Fire Emblem fangame (Fall of Thabes), it’s going to be set in Archanea. But not in the distant past, instead it’s going to be set a after Mystery of the Emblem, focused on the nation of Pyrathi, where you fight your first dragon in the series. It’s a very brief plot point glossed over in Shadow Dragon (and literally skipped over in Old Mystery), but I think Marth’s actions in that chapter were highly immoral. He invaded and overthrew a non-belligerent, neutral nation who refused him asylum, and then, presumably, left it in complete chaos. Imagine if in Radiant Dawn, upon exiting the Kauku Caverns, Ike proceeded to slaughter all the Goldoians and marched onto their capital, killing Deghensea just because they refused to let him trespass on their land. Marth surely didn’t mean to do anything bad, but even with the best of intentions, he would realistically have created a huge mess in the aftermath.

image1085×480 101 KB
So the game picks up a few years later where there are multiple factions striving for control of the land. These include

*The Mannu loyalists, religious cultists who worshipped Mannu as their god king and seek to reinstate a young manakete as their new king.

*New Age Radicals, people who think that Mannu’s overthrowing was a positive thing and want to force radical changes to the country (I’m thinking they might have been the ones responsible for the Wyrmslayer you find in that chapter in Shadow Dragon, having been a group that wanted to overthrow Mannu himself).

*Bandit King just trying to carve a name for himself in the chaos.

*Marth’s forces who see the territory as an annexed piece of Archanea and are trying to quell the violence but don’t really understand the people and are seen as outsiders by everyone.

*The protagonists, a sort of Dawn Brigade like group that don’t know how to fix things but are trying to help in any way they can.

The prologue takes place during the War of Shadows where you fight the Wolf Guard and expel Archanean forces from the land. Hardin tried to draft soldiers from Pyrathi during the war and responded to the resistance with force, which has further turned the people of Pyrathi against outsiders and Marth’s later attempts to bring peace to the region.

I’ve released five chapter so far, including the prologue, and I’ve also implemented the world map, which a lot of fan hacks seem to forgo. Now, in terms of recruitment, the project is free to work on from anyone who’s interested. But the thing I’m primarily interested in is someone to make portraits for it. There a lot of portraits available to use from the resources, but they’re all from different people and feature different styles. If at all possible, I’d love to have just one person, or two people with similar styles, do the portraits. There’s also going to be quite a few Archanea characters in the game, so if anyone already has experience or a back log of characters from Archanea done, then that would be great.

The last, and least important thing, is characters. Fall of Thabes had a relatively small cast, but I’m going to go more traditional Fire Emblem cast this time and have a good forty or fifty playable characters. I’ve already made a Thread on Serenes asking for suggestions for characters and received some positive feedback. So if there’s any character concept you’d like to see implemented into a fangame, especially if you’re willing to write supports for your character, then feel free to suggest it.

And that’s it. Below is the link to a ups patch (Sacred Stones, naturally) of the first five chapters. Even if you’re not interested in working on this project, I hope you continue to follow it and play it whenever I release updates.

And here is a link to the Discord Server

Discord - A New Way to Chat with Friends & Communities

Discord is the easiest way to communicate over voice, video, and text. Chat, hang out, and stay close with your friends and communities.

Wow! This looks really interesting. I’m especially looking forward to see where you go with the Mallory character. I hope he gets a really cool custom sprite.

Aw man, I always loved the setting of the first Fire Emblem games, especially all those countries that didn’t get much fleshed out, this sounds pretty interesting!

Also, if there’s anyone who’s really into sound design or music then they’d be welcome on the project. It’s not my biggest concern, personally, as I find the default Sacred Stones soundtrack to be capable enough and I know how to import midis of tracks from the DS games which I’ll use when I feel like it, but largely for the sound side of things I’ll be finding the first track that is “good enough” rather than trying to expertly craft a soundtrack, which is something that can really enhance a project, especially if it has original music or arrangements.

The second demo is now out. This has the Prologue and Chapter 1-4. So three more chapters than the previous demo. I urge everyone to play it and tell me what you think. Hopefully it should give a much better sense of where the project is going and what shape it is taking than the rather limited first demo.

I’ve implemented a new feature. Bonus EXP. However, unlike Shadows of Valentia and Tellius, it works a bit differently. Bonus exp is automatically given at the end of every chapter to units whom you did not deploy in battle. Meaning your benched units will continue to grow throughout the game. This should hopefully allow for a wider diversity of units you can select to tackle each specific chapter, as you’re not forced to depend purely on who you’ve trained. Benched units get 40exp if you finish the chapter in less than 10 turns, and 20exp if you take longer than ten turns.

…In all seriousness this is a really cool idea! The events of FE1 Chapter 9 never really sat right with me, honestly. The game elaborates so little that I suppose you could interpret the whole battle there as Marth fighting back against a hostile army that decided to kill them regardless of how willing they were to leave peacefully, but, y’know… you could just as easily assume that that’s just what Marth and his troops thought was going on, or even read it less charitably than that.

Honestly, I have a massive soft spot for projects that aim to take events that are largely not that important to their home stories and are largely glossed over like this and flesh them out into the full stories they have the potential to be, so I’m definitely interested to see where this goes!

Incidentally, a minor bit of writing feedback: In “Either way, get out of my village now you shower of cutthroats!”, there should probably be a comma after “now”, and I might use a word like “gaggle”, “swarm”, “load”, “mass”, “mess”, etc. instead of “shower”, or even “deluge” or “flood” if you wanted to retain the simile to water in the word used. Admittedly, that last bit is kind of nitpicky; the line just reads a bit awkward to me.

Glad to see you’re interested…And you know what, I might seriously steal that name. Though it happens in 608, the same year Mystery of the Emblem ends (though much like Thracia, I might note a change in year). I’ve been having some trouble coming up with an appropriate name, just calling in the Pyrathi Project in all my files, but invoking Thracia might unironically be the best title, as, you’re right, it is very much similar, focusing on one specific region in a more focused light. I even take small areas from Chapters 8 and 9 to base maps on.

And you’re right, a comma is warranted, I’m an English teacher, so I should know that XD. But I’m sure there are plenty more typos and grammar errors in there. Give the demo a try and if there’s anything you can contribute in terms of assets or character ideas then join the discord and share!

I’ve decided to implement two different promotion systems. There is the regular Master Seals, which promote units to the classes they all have in the DS games, and there’s also the ability to pray at Salamander Statues across the world, which provides alternative promotions. This was done so I can have my cake and eat it to in regards to being authentic to the established Archanea class lines while still having more interesting class variations in, and because it shows how Pyrathi’s isolation has made it more distinct from the rest of Archanea and more similar to Valentia (Master Seals are specifically going to be noted as something new to Pyrathi and most Pyrathi enemies will have the alternative promotions).

Here’s a video of an animation original to this project. I didn’t make it myself, but the guy that did just made it as a gif, so I had to put in the work to actually make it a functioning battle animation. I’m pretty proud of the result. 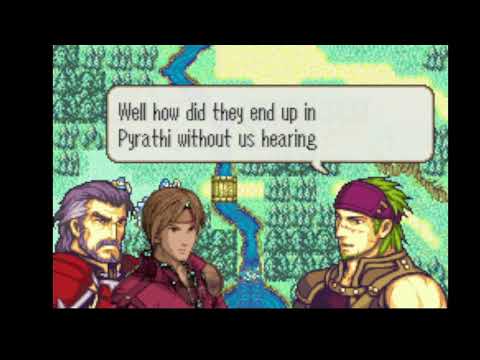 Okay. Big update to the demo. The game is playable up until Chapter 8. After which you can get access to Pyrathi promotions (Master Seals are now available as early as the Port Warren chapter, though you probably won’t want to be, or be capable of, promoting that early). All classes are available. Though there’s no actual part of the game to try them out on, unless you want to just play whatever remains of Vanilla Sacred Stones by continuing. Pegasus Riders do not promote using Salamander Statues, as I’m turning the presence of Pegasi into something of a plot point and wanted to implement the whole Master Seal/Elysian Whip dichotomy Shadow Dragon went with (the first Elysian Whip will be available in the next chapter). I also plan on putting in Dread Contracts so Thieves can have two promotion options. Oh, and the main characters now have custom portraits of their own made by me using the portrait builder. I hope everyone can spend a few hours playing the new chapters and tell me what you think of them. There won’t be any more updates in December as I’m off on a holiday without my laptop later in the week. Enjoy your own Christmas and New Year.