For a quick way back into my main thread, for those either curious on what else I’ve done or who just want to hop to my main page, here’s a backwards link to my main ‘Bucket’ which features all of the other stuff I do, including tilesets, battle animations, portraits, and occasionally stupid things like recreating all of Thracia! 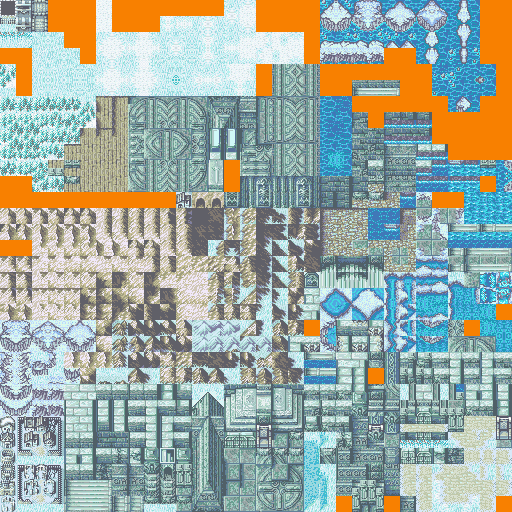 FE8 - Snowy Bern512×512 66.9 KB
Snow Bern, based off this post by FEAW from 2015 is one of my particular favorites of all time, thanks to a combination of snow, mountainous and temple assets along with wooden floors and tons of compatibility with wonky stuff.

Rather than my own custom link, Vennobennu’s post suffices, as he was the one that last touched the tileset and it contains a bunch of updates to the original, such as the aformentioned doors, more water and made the water function properly in animation. He even included the Shrine of Seals.

You are on fire right now!

I made an edit of this tileset:

Noteworthy changes include adding wooden floor tiles, the full Shrine of Seals pedestal, some alternative water tiles, including my shallow water tiles, and fixing up tile animation compatibility. Some tiles like the forests were in the animated zone and thus would be overwritten if tile animations were on, so I shifted things around to put them outside it.