Thanks to 7743 for adapting this for FEB. You could theoretically could do this with FEB events currently by manually writing LOCAs (location events), but that sounds messy. I’d wait for FEB compatibility.

Thank you for the detail in your question, by the way. It’s always good to give as much detail as possible around here.

Thanks, both of you!

I supported to stair expansion of Snakey1 with the latest version.

Actual example.
However, in order to put this in, the menu re-point is substantial, so we recommend backing up before doing it.

install the stairs patch,
then , Make a staircase with a map object. 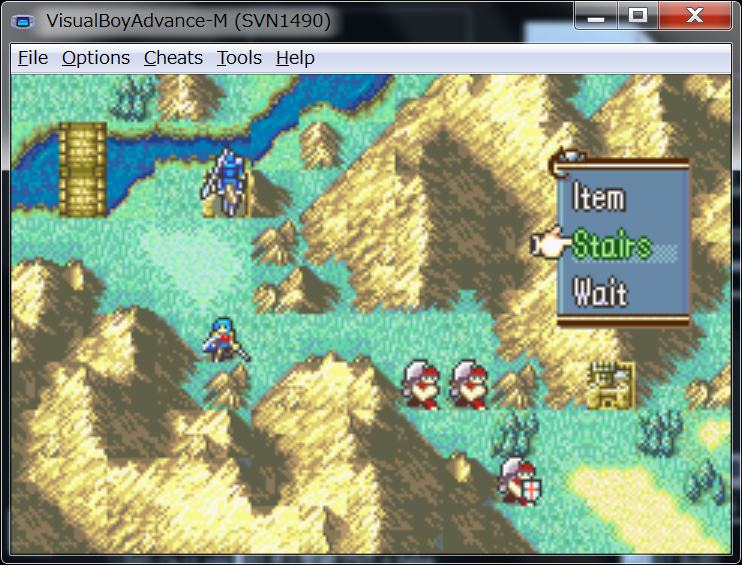 SummonASM
Tired of summoners being considered inferior to druids? Are they falling behind in EXP? No more!
This hack will allow you your summoners to gain EXP (and level up) from their phantoms’ battles.

Tested with anims on and anims off (Yes, they use completely different level up systems.).
This has been written for a very long time, but now irrelevant previous arrangements are now null. Just now I’ve had the chance to clean it up a bit.

That’s it. This hack should be very user-friendly and easy to install. It DOES NOT conflict with the skill system for once.

No go and promote to summoner without fear of EXP loss, and make good use of phantoms as interesting strategical pawns. As always, please find me with issues or bugs!

BLESS. The long waited time of exp gain from phantom battles has finally arrived, thank you!

This is undoubtedly my biggest undertaking so far. I am proud to present…

What will this do for you? There are numerous features while being user-friendly.

In short, this system changes support growth over time to a system where the user defines when support growths occur through event commands, support (talk) conversations in CharacterBasedEvents, or base support conversations.
Support bonuses are defined by defined bonuses per level per unit pairing instead of by affinity.

This has been extensively tested, but there are many moving parts to this. Please reach out to me with any issues you may find.
Thank you to everyone for your support throughout my time in the community

, and I hope to have something else released soon

Any plans to add the Support rework?

There is not for now.
It is a patch that significantly changes existing data structures, so it takes a lot of effort to import.

Modular Supply
This is pretty straightforward. This hack allows you to define a list of characters who can use the supply for each chapter. This also considers whether the armory man lets you send items to the supply or whether you discard items when getting an item with full inventory.

In other news, my hacks that conflict with the Skill System have been integrated into the Skill Sytem buildfile, resolving the conflicts. If you are using it and wish to also use my hacks, please update the Skill System, go to _MasterHackInstaller.event, and uncomment the hacks you wish to use. My installation directions in previous posts have been updated accordingly.
This includes:

Please let me know of any bugs with the supply stuff or Skill System things that probably were may have been may fault!

It’s been a while, but I’ve got a small little hack.
Set Scripted Battle Number Display
Tired of scripted battles having more or less damage dealt than the number displays in the battle screen? Or 100 hits missing? Or 0 crits? All from battle units having variable stats or being too lazy to set the characters’ stats? No more!

Had a fun testing environment here
All the numbers you see here are set in my events while setting up the scripted battle rounds using the following macro (defined in the installer for you):

To make a number appear as --, use 0xFF in the macro.
To clarify: this does NOT affect the results of the scripted battle. This only changes the display.

Just get everything from the Dropbox in the OP, include “ScriptedBattles.event”, and you’re good to go!

Next on my plate in terms of big ASM is stuff with Support Rework to make base supports more versatile and maybe not necessarily tied to supports themselves. Could use some optimization as well.

As well as some MSS stuff for displaying support data on the stat screen spookily.

I’m open to suggestions here, so let me know what you’d like to see in Support Rework if you’re interested. I’m looking for feedback!

Doesn’t Ability to define an event to play instead of a text ID being shown in a generic event cover Maybe allow them to define an optional music change in the base support table for the base convo, as you can just play the music with the support event?

That’s what I was thinking, but it may be a lot of trouble to make a new event if someone frequently wants to do a music change. This is the generic event.

So I was hoping to avoid a small edit like that requiring rewriting a new event.
I’m also thinking using an event file to contain the base support convo table would be superior to a CSV. Actually I’m pretty certain I’m gonna make that transition.


Do the titles text, music, etc. seem random to you? That’s because they pretty much are. Head into the “How to” > Example section to see how I pulled this off!

This is completely independent from Support Rework, but that doesn’t mean I haven’t designed parts of it to play nicely with that future integration. Like the text getter for titles as well as allocating some of the convo entry space for future use there. Support Rework acting as an extension of this (or maybe the other way around idk yet) will be coming in the future.

I’m open to suggestions for whatever you may want to see in the generic event. The code for this was written in C, so let me know if you have questions about that or about the system in general. (Shoutouts to @StanH for the pretty amazing CHAX system that made this revision way less painful than it would have been with handwritten asm again!)

(Also while I’m here, I may as well mention I fixed the bug with the prep screen hack where the greyed out description text would not be gotten properly. I’ve also updated Repointers.event with a couple fixes/aditions.)

I guess the joke would be “How to: have normal conversations before you go out to fight.”

Awesome work there! Making conversations that much more fun.