Some minor modifications suitable for porting to other people’s games may be shown here. Mainly write in C, C-Lib is called as decomp-based include files.

Reset the Bg config to null the semi-transparency effect.

DIY on H&S Screen. You could just include GameStartScreen.event and get it. For your own gfx, replace the file Data/GameIntro.4bpp.lz with a LZ77 compressed Png2Dmp file.

Reworked on promotin routinue to allow diy on promotion list. Now you can freely decide the promotion list based on character index, class index and item index. Since this patch does not involve the item system rework, if you want to use non-promotion items to promote characters, you will also need other patches such as IER.

Just include PromotionRework.event and then you will get it. For custom usage, define your own usr-function const u8 *GetUnitPromoList(u8 charId, u8 classId, u8 itemId), I have made an example.

Is there a standalone version of the skill animation that shows the skill name? 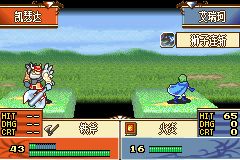 Yes, I slightly modified the activition routine, add the independent skill name rather than skill desc to show on screen.

But this patch is also support to the skillsys_FE8

It seems that item index may be failed to indentify in Promotion-Rework patch, I have fixed this bug, also updated to download link to git repo.

A DIY map anime, just like Debuff-Status-Clear-Routine.
Just include MapAnimesInstaller.event, then call for function void StartMapAnim_Gravity(struct Unit* unit, ProcPtr proc), then it will start a child blocking proc to show anime effect.

Due to the default of the program, the target character exists in the current screen, so there is no effect of moving the camera. If not, you can either move the camera over before calling the function, or delete the comment on line 41 in Gravity/Gravity.c:

For now, replace “a” patch is just delete the character, this patch has rewrite function void PrependArticleToString(char *str, const char *insert_str, s8 c) so that we can replace “a” to a space.

Just include RemoveA.lyn.event and then you will make it. Don’t forget define your own FreeSpace since this is just a C-generated file.

This is also supported for UTF8 Characters such as Chinese and Japanese texts.