Create an Ugly Mug! The sequel to Freakishly Ugly Combo Kit is here!

This topic is the sequel to F.U.C.K.

The rules are the same. Fuse two characters together to make a horrific abomination like no other. When you finish, post two (Or three!) mugs for the next poster to fuse.

Sidenote: Please keep the character at GBA scale. Don’t post a stretched image, since it won’t look good next to the others.

Additional note: If you don’t like the last poster’s mugs, feel free to make a character from someone else’s.

It’s all for fun, and the points don’t matter. Mugs from the old topic: 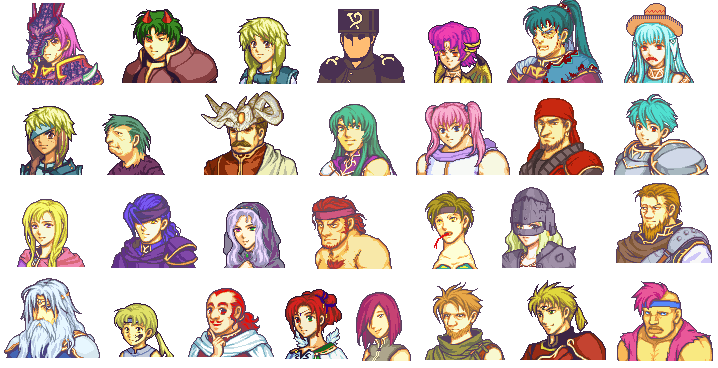 I’ll start off by listing three mugs. Fuse two of them, or all three! You must make an ugly character!

Oh no! Lyn is too sad! Lalum is too happy! Lyon is too edgy! Restore balance to the universe by neutralizing all their crazy emotions!

I tried to balance the universe, but I think i made it worse.

EDIT: Forgot to add 2 new ones, try this on for size

There’s a glitch in the Matrix! Ahh!

I look forward to seeing what comes out of these ones.

Can’t wait to someday make Fugly Emblem with these monstrosities.

I think I just made a JoJo character

Here’s your next set

Oof I was to late. Didn’t really go for ugly though.

“A thieving thug-merchant who turns gold into automated junk.”

Alas I was too late but still a thing

Too late?
Oh well…
Still wanted to post this, neither very good nor exciting, but I think this is the place it belongs to.

Edit: Made it a bit smaller
Edit edit: This time not with Paint
Edit edit edit: I just wanted to post this, don’t judge me.

Father, I am a sinner.

*Facepalms*
Garcia, why did you drink the Fazon?

Next Batch:
The Good, the Bad, and the Ugly

you a lil’ nasty

Well that was rude…

Hope I’m not too late… Oops.

Oh, and this guy’s part of it all too, I guess.