[FE8] Terror Of The Forest (FINAL CHAPTER OUT)

Hello, you lovely anime-chess players! My name’s Zeldacrafter64, as you’ve probably already figured out, and I’m here to share my project with you! I know it’s far from perfect, but I seriously hope you will still have a good time playing it!

(Also, I apologize for my occasional grammar errors, I’m not a native english speaker. Please correct me if you find any, so that I can hopefully improve!)

WARNING : READ THIS BEFORE DOWNLOADING
There is a bug that makes several chapters unfinishable if you save over the prologue. Don’t do that.

EDIT : Due to the recent rules regarding hack content and age restriction, here’s a list of everything listed under ESRB’s website that I could identify within ToTF. I apologize if I forgot something, so please notify me if you find something “trigerring” I haven’t mentionned here. Note that I have listed the project as 17+, but maybe it belongs more to 15+? All this is kind of confusing to me.
-Depiction of blood and burn scars, some light gore and mentions of torture
-Fantasy violence
-Use of alcohol
-“Comic mischief” (I dunno what that is but honestly I’m just assuming I did it at some point)
-Somewhat strong language
-Sexual Content
-Sexual violence (Especially attempted from one teenager to another. Thankfully off-screen and avoided before anything really squicky can happen. Happens in the middle of Ch13’s long end cutscene, specifically Arya’s flashback)
-Hate Speech (Between fictional races, especially from amazons to regular humans around Ch18.)

What’s new?
-Some more bug fixing.
-Added a bunch of temporary characters, bringing the total roster up to a whopping 76 characters! If you count character who are the same lore-wise but take up more than one unit slot, the number goes up to 79 characters!
-One new chapter added
-Some story details, mostly regarding Arnold’s betrayal, have been changed

Do you want to be a part of this train wreck I call a project? Do you have Discord? Then that’s great, 'cause here’s the project’s discord server : FE : TotF

Thanks for your attention ! I hope you’ll have fun playing this hack, even with all its flaws !

Thanks ! It really means a lot !
If you ever decide to give it a try, please tell me what you thought about it !

Thanks ! I was afraid there would be some kind of hack overdose these days, given how many people are given the opportunity to make their stories come true. Glad to hear that !

Welcome to FEU. Showing up with a patch for your project is always a good sign. Would you be interested in submitting it to FEE3, the yearly community showcase? All projects are welcome.

Hello folks, Yes, it’s that time of year again. The event that we’ve all been waiting/procrastinating for, it’s the ninth annual FEE3. For those of you who are new, FEE3 is a fangame convention that brings together hobbyists who work on Fire Emblem-related projects to showcase our collective progress and new initiatives. Back in the dark days of 2011, when it seemed like the series’ days in the west might be over with the lack of an English translation of FE12, Fire Emblem hackers decided to b…

Okay, (first) new update ! I have released a version fixing the most important and annoying bugs. Although, with my computer dying on me last week, I’ve lost a lot of progress, I hope y’all will appreciate the newest version !

Finally ! After what seemed like an eternity, I have made an update I’m proud enough to share ! Remaking Ch5x was the main goal, and took me a whole lot of time (In total, I’ve changed it more than 5 times)

I hope some of you will have the patience to play through the game again, and that you will enjoy it ! If you have any feedback, I’d be more than glad to listen to it !

Playing through this now. Gotta say, this hack is a fun little thing so far!

No mounted units on both sides? Interesting maneuver.

I’ll have some feedback ready in a bit.

Alright here’s my feedback so far. I believe I made my way up to Greed is a Mad Mistress.

Anyways, that’s all for now!

that’s not yours to distribute blood

you’re scaring me because there’s no

I’m trying to improve on a lot of things, but the gameplay is still lackluster… I need as many playtesters as possible, so if you don’t know what to do of your summer vacations, then search no further!

Pretty weird some entombed have 3X hp but some has 51 hp
And they give too much exp (u can ude void curse skill or nerf their level to avoid playables getting a level per kill) my team has a bunch of lv20 but no promotional item now lol
Enemy turn still progresses slowly (maybe they run in the FOW slowly (zombs)) and Arnold can swim somehow
(I think i saw someone not mentioned in the excel file’s portrait again in batto caza support)
Does the late joinets get better growth but kinda low bases?
Second Secret character appeared yet?
Hero desc didnt include lances too
Yami nearly capped level bruh
Sry by discord acc had problems so couldnt log in there

Is anyone also stupid to a point they watched the full Johnny dialogue?
Who is this shirley and the guy under the closet wtf kinda creeper (aww man)
So since grace die and chapter will end and zugma (and dick) cant swim, arnolf cant carry zugma there too, so u cant get the chest?
Wot if sophoa nuked nikage at first turn lol (that was so muda)

Actually calcium can be obtained from bones

So… Sylv is someone who joined the game’s uncle?

Wait am I supposed to try ch14? The boss had physical weapon ranks, and no weapon equipped
And satsujin starts at lv0 and full skill and speed? Lol other 2 guys too
And trashie has no mag growth only str lol (10 spd u must be kidding) nvm just the average druid u will see
Btw ch21 is finalr right? U need to add more stat boosted promoted enemies

I love the character description! I love to see that this hack will be completed! Good luck!

Thanks for your feedback! I’ve corrected a few of the issues you’ve mentioned (Especially those from Ch14 characters)
It sucks that you can’t connect to discord anymore… Hope you find a solution soon.

prologue counted I think?
no, still waiting for the appeal for account 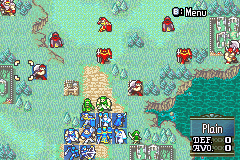 So a unit will disappear somehow overlapped with that fighter
If u pin the unit from unit menu it will cause the cursor to disappear
(Wtf is trashie speed and con, doomed to get doubled everyday)
Why does rhoam has excalibur in his inventory and anima+sword rank
Arya had staff and anima rank???
Btw what i mean stronger promoted units i mean those who has more decent stat distributed around (so wont get dounled that often and can hit consistenely)
Not just in one stat so 22 mag with tomefaire mages can one shot sylvester (30 def is rather acceptable in my opinion cuz u can ude mages to bypass)