[FE8] Terror Of The Forest (FINAL CHAPTER OUT)

I encountered an issue in Chapter 7. I can’t initiate Valkyr’s recruitment conversation (checking on Sylvester’s page after talking to Igor, it says “Talk - - -”). Might it have something to do with not having spoken with Alyssa yet?

Hi! Thanks for pointing this out! It was a problem due to me mixing up units pointers. This has been fixed, and Valkyr should be recruitable by the next version (Coming very soon)

Is that something I can fix on my own in FEBuilder?

Anyway, thanks for replying so soon. It’s a good hack from what I’ve seen.

Oh, of course, it’s pretty easy to fix! The mistake was just a slight oversight.
You need to go to the “talk” events, and change Valkyr’s number to “EC” (Or something like that. It can’t be more than 45, that’s for sure)
Alternatively, I think I will publish a new p1tch in a few hours, so you can also wait for that version to come out!
And thanks for your compliment, I’m glad you enjoy the hack! If you have any feedback, whether it’s about story, characters, art or gameplay, don’t be afraid to tell me!

Apart from a few visual glitches (such as, for some reason, the Hero’s sword crit animation), which I think you are already aware of, the only thing that gave me pause is how easy it is to arena abuse in chapters 3 and 4 by selling a stat booster, but you may have intended for that to happen.

EDIT: Recruiting Valkyr crashes the end of the next chapter, with an endless loop of Valkyr’s quote (“I’ve been sent to this kingdom…” etc.), the assassin’s quote and the villager joining Sylvester. Pressing Start doesn’t help. I think there’s a small mess with conditional labels in the end event (the Blue Gem dialogue is the same as Valkyr’s quote, and the no prize one is the same as Arshan’s.
Also, is that villager playable, or planned to be playable?

Thanks for pointing all these bugs out! I’m aware of most of the visual glitches, but have zero clue how to fix them, unfortunately.

As for Ch8’s end, this is due to Valkyr and Bill having been added later, and yet another oversight from my part. I will make a new patch right after writing this message, so you don’t have to worry about tinkering with FEBuilder!

And about Arya, it’s not much of a spoiler so I suppose I can say it without a tag, but yes, she’ll be playable later on. (Ch14 to be more specific)

Edit : Done! You should be able to proceed normally through the game!

I had already gone through with changing the pointers, but thank you. Stuff I noticed up to chapter 11:

Anyway, I really liked the idea of how to handle Arya, Chastity and Esther (Chastity having Saviour, Esther being able to tank most stuff, except for Generals, Halberdier and Sniper), and even having to bank on the boss killing himself with the Devil Axe is very funny to me, be it intentional or not.
(I’ll edit to make this last block a spoiler when I understand how)

EDIT: For chapter 12, the Armory is nonfuntional (but the Vendor works just fine), and when I double attacked with Helena’s Handaxe, the followup did no damage and froze the game (twice).

Thanks again for all the feedback! These chapters haven’t been tested as thoroughly as the others, hence why there are more bugs and oversight here. My apologies. The only bug I don’t know how to fix is the pirate handaxe animation (As I’ve noticed any female pirate has the same problem when working on Ch5x),so, uh, I suppose Helena is doomed to get to the bench until I fix it.

Is it possible that the Seize point in chapter 14 is at 0,0?

(the hack has a lot of things messed up badly now it seems) (awaiting fixing)
the cant open door glitch was fixed b4 and it popped up again, according to your feedback
turn off helena animation
another patch notes:
added even more bugs for future patching

Ah, is Ch14’s win condition set on “Seize”? I think I made it so that it was kill the boss, but it might be possible that I also forgot about that.

I sincerely apologize for all the bugs. I assure you I am trying my best to make an enjoyable hack, but I can’t notice everything, unfortunately. This is why feedback such as yours is so valuable to me!

Other two things I noticed in chapter 14:

Also, I’m gonna join your Discord (if it’s alright), so as not to bloat the thread with any minor thing I notice.

Hi! Dunno if people have brought this up (though from what I’ve gleaned, that’s a no), but the Pupil you can get in The Mad General (which I believe is Chapter 5? I wasn’t keeping much of a count to be honest) seems to get EXP at a horrifically slow rate, seemingly that of a promoted unit, in spite of being a Trainee class. Is this on purpose for some reason I’m unaware of, or a bug? It feels like the latter, considering the other two Trainees have no sort of issue…

Mad general chapter give you a monk and a hero I think (and a weird notes that can be used to get a powerful weapon in ch10 (just the one with snowy terrain, talk achilles to the npc mage)
The only pupil is named Dick and recruited in ch8 I think

Don’t forget the Journeyman you can pick up. But no, she’s definitely classed as a Pupil, though they can apparently use Light, Anima, and Dark tomes at base. So, uh…Definitely not a Monk lol. Even if she was meant to be a Monk or the sort, however, it doesn’t change her bizarrely low EXP gains.

That’s weird, neither me or anyone who has played the hack met this problem… I’ve made a quick test and she gained a level by defeating 2-3 enemies, so she definitely gains experience faster than a prepromote… I’ll have to examine this further.

Also yeah, I just realized now she had ranks in all the offensive magic types. This is now fixed!

Strange…Perhaps I have an older version. I’ll install the latest one and see if anything changes.

Maybe… Although your version must be somewhat recent, since Sally (The character in question) got changed from monk to pupil not so long ago.

Hello, I just started playing this hack recently, and I gotta say I like what I played of it so far. Here’s my favorite character so far. 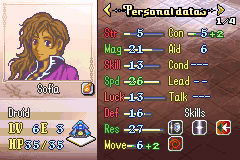