Not too long ago, I released a hack called FE6 Boss Recruitment. It allowed the player to recruit 5 bosses of their choice throughout an otherwise unchanged FE6 playthrough. It wasn’t perfect, thanks to stability issues and a lack of any new dialogue, but it was a functional way to experience this concept. I (along with several friends) have taken another crack at the idea, but this time in FE7. 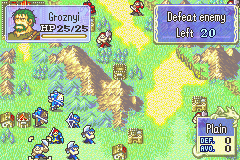 Download link is here (patch over FE7U).
Growth Doc is here.
EHM or HHM is recommended. Lyn Mode can be played at your discretion.

Glad to see this released. Happy to say I did assistance with this. Check it out if you get the chance! Some fun new writing stuff and a good twist on classic FE7 characters.

me and the bias

This looks really cool! I’ll give it a try sometime.

quick update to do a few things we missed before release, namely

While looking in FEBuilder, Kaim has an ending title, but not an actual ending.

Kaim has an ending, it just only displays in the hector mode section, cause he’s only gotten there

Oh yeah, oops. I was looking at Eliwood’s side.

you can recruit denning, he even has a nergal boss convo

Lovely idea, congrats! I just don’t see a couple bosses taking side with the good guys. Like the morphs, for example. But lore aside, love it. F for Eagler.

So… do we have to start off playing Lyn Mode after patching it or do we start off with Eliwood or Hector by choice? Just asking a question.

Are there any supports that are exclusive for Bosses during Boss Recruitment? I know that there’s a limit to the 5 bosses that we choose to recruit and I’m wondering about it before I decide to play it.