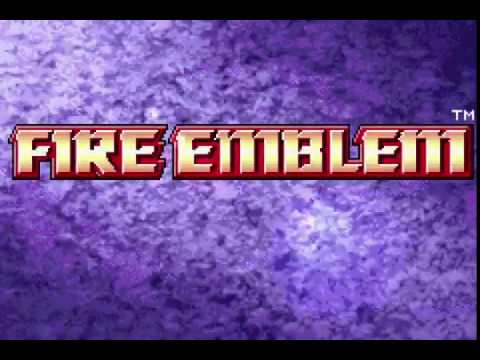 This is my first remotely substantial ROMHack, a graphics update of FE6 that rearranges character recruitment and involves new story scenes. I had actually done most of the mugs a very long time ago, but before the advent of FEBuilder, I struggled to even add 1 character to the game (as in without replacing anyone else) without it freezing up via the Event Assembler and Nightmare.

Many changes assume that you are not doing an ironman run, and thus will completely destroy your immersion if you leave people dead but they show up in cutscenes anyway. This is largely because I replaced a lot of “Merlinus shows up because he can’t die” scenes with other characters. The actually new scenes made can be thought of as akin to those bonus scenes that were in additional playthroughs of Radiant Dawn.

Units I never actually wanted to use who were not difficult to remove from the story were replaced. This is because I made this hack almost entirely for me to play over anyone else, and am just happening to make it available for others to play after going through enough quality control to be presentable.

To me, this is my definitive version of FE6, which I will play over the vanilla version henceforth every time I feel like replaying the game, which was already the title I put the most replays into. It’s also something I wanted to do because I knew I could actually get it done and have a finished game, and my estimate of needing to work on it for around 2 months was accurate.

To you, this will probably just be a novelty. There are FE6 hacks with significantly more expertise going into them, like Project Ember and Maiden of Darkness. As a result, I am going to avoid spoiling anything that could be interesting or controversial about whatever I have to offer. Story differences are distributed throughout the game, so I do not recommend skipping dialogue at any point, including what might start out the same way but turns out to go in another direction. If not playing to see what’s happened with the story, the game probably isn’t very worth playing at all as it’s mostly just vanilla FE6, and dialogue scenes are where you see portraits in action the most.

The overall plot is almost completely intact with the original and I do not intend for any changes made to character dialogue to be considered somehow official, or even headcanon, even if I tried to keep most of it consistent with who they are.

For people who do not use VBA as their emulator and thus can’t read the savefile properly, this is an alternative with the hard mode patch applied.

Why is Melody so pale?

I use very strong contrast at times which results in especially bright (or dark in some cases not found in this hack) skin tones for some characters. She originally had a somewhat lighter complexion than others in the game as well, but there are many cases where I depart from trying to be completely accurate for the purposes of my own aesthetic.

This made me do a double take, figure it should be brought to the forefront. 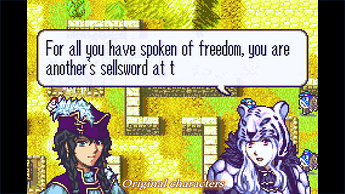 the dreaded out of place OCs who harbinge cringe

Wouldn’t it have been better to use the patch that unlocks hard mode instead of giving a hard mode save? (the one you gave wasn’t working with my emu, so I had to add the patch in builder myself)

just because you acknowledge them ironically doesn’t make it any less of what it is :OOO

Wouldn’t it have been better to use the patch that unlocks hard mode instead of giving a hard mode save? (the one you gave wasn’t working with my emu, so I had to add the patch in builder myself)

I didn’t know that existed, though either way I generally avoid trying to make changes I’m unfamiliar with in fear of something else screwing up somehow. Actually I’m not aware of emulators besides VBA…

this hurts every fibre of my being

lol did you make these mugs or what

i take offence to that

yo, shout out to @NICKT for his work in fe6 incandescence edition! we love you, and we’re ready to support you on whatever venture you may complete next <3

…Is this an April Fools joke?

I’m legitimately not sure. It seems to have too much effort in it to be just a joke, but then I hear about stuff like how apparently Gonzales is unrecruitable, (and the weird trailer), and combine that with the timing of the release…

I can absolutely guarantee it is not, having played the first 4 chapters.

As unpopular the reception for this seems to be, I’m actually going to stand to defend this.
This is Almirage’s ideal version of FE6. It’s unlikely that it’s going to be the same as yours, but if his changes click with you, then here it is, available for you to experience.

I know there’s a lot of cringe behind it, sure, but there is also, well, effort here, which is more than can be said about a lot of other edits.