Here is the Randomizer: https://1drv.ms/u/s!AsfU3qRjcTTdnEoTseWI55eBSFjO?e=btzZgr

Here is a link to DSLazy, which is required to make it work: https://www.romhacking.net/utilities/793/

And here is the source code on GitHub (Warning! First time, learn-as-i-go Haskell code ahead): https://github.com/jespoketheepic/Jespokes-FE11-Randomizer

So i tried my hand at learning Haskell over the last few weeks, and the people that recognize me should know what that means: A new Fire Emblem Randomizer! I’m very much on brand this time too, making a very janky randomizer for a game that had none before: FE11 this time.

Partially because Haskell turned out to be a very… unconventional language for this kind of project, there is no GUI this time. Everything is operated in a terminal with (y/n) or 1, 2, 3 inputs for answers.
The available randomization options are:

It also adds Falcon Knight to the regular class pool, and if you randomize classes, it also shuffles who
has access to each PRF weapon.
The Whitewings, who normally each start over water, should move to land now so you can actually get them if they can no longer fly.

Basic instructions on how to use it:

Lastly, i included a side feature i call the Meme Mart. It’s selection is sparse for now, but it has a few very stupid edits you can apply to the game, after the randomization, or on its own without any randomizing. I would like people’s suggestions for what edits i should put in the Meme Mart in the future. I load a ton of the variables of the game into easily edited datastructures, so what kind of edits i can offer is pretty broad, so give me some ideas

I can’t even process the thought of writing a randomizer with a functional language.

What’s the data structure of FE11 look like? Is it closer to GBA or does it have a file system like the Tellius games?

Truth be told, i don’t know the structure of the GBA games, the games i have edited are FE3, 4, 9 and 11.
It is pretty similar to FE9, but the worst aspect, the 90% pointer based dispos files, turned much more manageable.

Someone gives FE11 some support? Amazing. Btw, are falcoknights buffed? I never used them, but I heared they are just a bad class. Unless they are supposed to be a memechoice in the rando.

So a DS ROM has a file system with distinct files internally? Interesting. Good to know dispos files make a return.

From working on FE4, 6, 7, 8, and most recently, FE9, I’m of two minds on that. On one hand, having individual chapters broken out into their own files makes it easier to manage. On the other hand, needing to rebuild the file afterwards is a pain, and getting the game to recognize the changes is sometimes a crapshoot.

If I try to check the stats of a generic enemy lord the game freezes.

Thank you for making the randomizer, I have been wanting one for FE11 forever!

, could you tell me what the problem was, so that i can help others that may have the problem in the future?

Yeah sorry. Wasn’t trying to be an asshole lol. Anyways I just didn’t unpack the rom but even after unpacking it isn’t working. So I don’t know but that was the first problem.

Did you download the whole folder, and place the DSLazy folder inside it?
Are you on a different OS than windows?

Yeah. I’m on Windows 10, everything is in the correct folder, the program just crashes every time I hit 1. I can post a picture of the folder if you want. 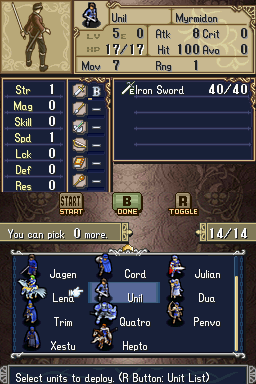 Is this intentional? All of the Replacement units are almost completely statless. No meme market stuff used, just some pretty normal options. Besides that, all of my units had very low stats all around with a few weird exceptions.

GBA style randomizing screws over the replacements. Stats can seem really low because characters get actual Mag/Res/Luck bases from the randomization.

Okay, then how about this from my Randomizer Log:

That looks fine to me.

So apparently, Bantu’s personal growth rates sum up to… -5.
That must have really messed with the numbers, resulting all those “251%”'s that are probably actually growth rates of -5% which get treated as zero.

Yes, I went and did science just to investigate and make sure. 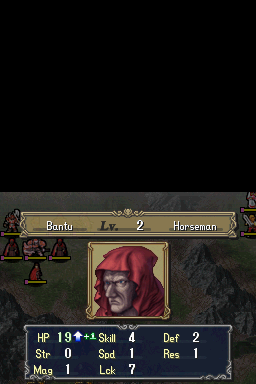 So, I’m attempting a randomized run right now, and I have a few concerns: