Staff edit: The contents of this project may be considered objectionable. Play at your own risk.

A princess fighting to free her kingdom…
A ranger running from his past…
When their paths collide, the course of history will be changed forever…
This is the story of the Black Dragon.

I’ll say right now that this hack is very, VERY rough. This is my first attempt at making my own fangame, and there are definitely places where my inexperience shows. Then again, I assembled this entirely on my own in just over a month, so I guess it’s not that surprising that certain parts of it (especially the level design) aren’t so hot. My focus here is on telling a good story(hopefully I succeeded and making the game fun; I’m not really looking to do anything especially innovative with the gameplay, outside of adding in a handful of QoL fixes from newer FE titles. I know that I have a lot of room for improvement as a game designer, and I hope that spending time hanging around this website will help me do just that.
I will drop a quick warning that the story is a good deal darker in tone and more mature in its subject matter than typical Fire Emblem; something more in line with what you’d see in Berserk, Game of Thrones or The Witcher. Be aware of that if you are sensitive to certain mature themes.

The plan for this hack is to get through the first quarter of the overall story. This first arc will be somewhat more intimate and small in scale, though later arcs will ramp up the scale and stakes significantly.

OBLIGATORY RECRUITMENT CALL: As you can probably guess, I would very much appreciate having other people to help me with creating this hack going forward. I would like to therefore put the call out for people interested in this project to please send me a message, because I’d love to work with people. Examples of people I’d like to have on board:
-Graphics people to make mugs and possibly new battle animations
-People to read my story/support scripts to help me improve them
-People to help with map design, because I am noooot good at it lol
-People to help me with designing the world map, making it function in the game, and helping me figure out how to do world map exposition scenes (because god damn did trying to do them on my own make my brain hurt)
-Experienced hackers whose brains I can pick for general advice
-People to maybe help me implement new skills into the game

If you’re feeling lazy and don’t want to play through the game, you can watch me play through my hack on my YouTube; the first episode will go live tomorrow morning:
https://www.youtube.com/watch?v=_lqIP6hHglg

And finally, if you’d like to support this project, consider hopping over to my Patreon and donating. Even a single dollar helps:
https://www.patreon.com/TheKingBahamut

Thank you so very much, hope you enjoy the hack!

Interesting. I’ll have to try it out sometime.

Will there be beast units?

-map sprites (apparently they exist on this website, but I could not find them to save my life…)

Go to The Ultimate FEGBA Asset Repo and the Google Drive, and Graphics -> Map Sprites. There’s a pretty big collection.

If you were seeking on telling a good story, then you did a great job on it. Your writing style sure had drawn me into that world.

Looking forward to its completion!

So I was having a bit of fun streaming the hack to some pals, and I wrote up my thoughts on what I’ve played, and my suggestions for improvement.

I hope that what I wrote here may be helpful in some way.

As in shifters? No, Grey is just a wolf.

Hello and Happy Holidays! I ended up playing this last night on a whim and wanted to share my feedback so much I made an account lol. I’ll be pretty honest and say I’m not a really good Fire Emblem player so things like level design/unit balance aren’t really my forte but I’m always on the lookout for new stories to read so my thoughts may help? Rivian already touched up on some good points that I want to echo in some cases. I only played through it once so my notes aren’t super detailed with screenshots etc.

Like I said I’m not really a good FE player so as far as chapter design goes Rivian seems to have some good thoughts. I defeated both bosses on chapter 5 and assumed that was where the hack was done as the chapter didn’t finish for me. I’ll have to give it another go later. I suggest taking a look at the bugs Rivian pointed out. Especially the textboxes! The textboxes were really distracting imo and could benefit from some cleaner presentation.

That’s a lot of notes but I liked it more than I disliked it. I do think that you have some interesting worldbuilding and that you put a lot of effort into the backstory (even though we as players don’t even know all of it yet!) so I’m interested in seeing where it goes. The presentation right now just feels very dark for the sake of being dark and edgy and nothing else. Best of luck and congrats on making your first hack!

Thanks for the feedback. I would encourage holding off judgements on Zean because there’s a bunch of character development he has yet to go through. 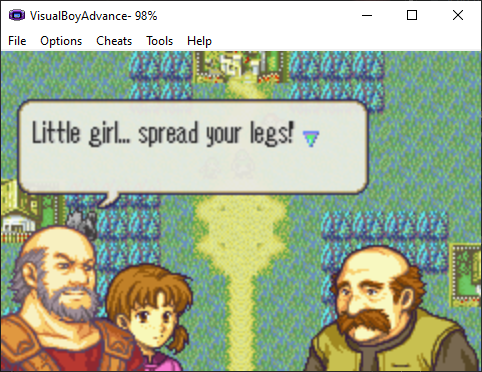 the hell is this
no seriously what is the point of writing this, i’m just
why
i don’t desire to continue

That’s a very good reason not to continue.

That’s some pretty cancerous writing (alongside a weak tile spam map). What is this? DGE?

I can’t imagine changing this one line in particular however, would impede on any of your hopes & dreams. You can still get a sense of the cruelty of the bad guys with less concerning lines. As far as I’m aware this hack is still in fresh stages and star-lord has more or less already described the issues in sufficient detail that need resolving for this hack to be more palatable for others to play.

You could always try not writing about child rape?

Nobody’s suggesting that you should give up on your hopes or dreams.

If that’s what people want, how about just saying “Don’t put this in?” instead of calling my writing “cancerous”? and dismissing it because I acknowledged that the medieval era was pretty god damn brutal? What people are doing here is not criticism, it’s abuse. Then again, maybe I was naive to expect better from the FE community.

It’s way too dark.
I mean i am no ray of sunshine myself, but damn.

don’t you go and guilt trip others by threatening self harm and suicide. chair’s reply may not have been appropriately worded and was pretty charged, but given what they had to look at, i can understand where it’s coming from. nor is gaslighting others for their reactions going to help you in any way.

what, did you expect people to take it well when you throw around sensitive and traumatizing problems like child rape as if it’s nothing? you could’ve added a content warning, at the very least. it’s one thing to be edgy and/or explicit and heavy with the writing, it’s another to irresponsibly mess with that. don’t try victimizing yourself here.

i can only repeat that it isn’t going to help anybody in this discourse, least of all yourself. you threw this at us, and so you have to expect being replied to, even if it isn’t what you may have wished for. i don’t think you’d have gotten much different reactions in other communities.

If it was a personal attack on your own character then yes it’d be comparable to abuse but only the writing itself was ever discussed in unfavourable terms. By no means did anyone remark on you as a person when discussing that line.

It sounds like you’re attacking his hack and suggesting people shouldn’t play it because the plot has child rape and that’s not something I can accept. People should be able to write about whatever they want, because I believe in free speech, and should be allowed to cause shock and offense for effect. It’s easy to cause shock and offense, but hard to do it in a way that isn’t out of place and fits with the tone of the story. Maybe you could introduce it later into the story after some almost as dark stuff happens so people acclimate to the tone of the story and it seems believable. Of course maybe you are an experienced writer and have already done this, and Dancer is just more squeamish than the average person, but considering this is a fan hack I think it’s more likely this dialogue takes place in the first chapter or something. Maybe you included this because you knew anything less wouldn’t be enough to shock FE4 players, I think you’d be right in that case. I think Terrible Writing Advice’s video on Grimdark would be helpful, as well as everything they make because they are just the best.
You should highlight front and centre at the start of your topic that THIS HACK HAS MATURE THEMES!! IF YOU ARE A CHILD OR EASILY DISTURBED SKIP THE STORY! And then don’t have essential gameplay information in the story that wouldn’t be so good.

I mean if that’s the case people should also be allowed to criticize it and be “shocked and offended”, especially if that was the intent. Free speech works both ways, and it’s not an excuse to share whatever you want without considering the sensibilities of others.