This is the 1.0 release of Snow & Fire, a tactical RPG made using the Lex Talionis engine.

This game is, at its core, an experiment on long-form map design. It is completed with four massive chapters, for a total of 8-10 hours playtime. Includes battle saves, mandatory full deployment, daggers, a skill points system to add reliability to activation skills, fifteen characters, numerous fully-written talk conversations replacing supports, and a unique set of choices that influence later chapters.

Hard mode is recommended for veteran players. A story and normal mode are included for less experienced players who still want to try the game.

Link to the google drive is here: Bitly Link

The drive contains a zip file and a manual. Download the zip file, extract it, and open the .exe file inside to play. The manual is best used as a ctrl-f search guide, as it’s probably too long to read in its entirety.

This took approximately nine months of work to make (probably slightly longer? I sorta lost track). A full list of credits can be found in credits.txt or through the credits screen accessible from the main menu.

The hack is completed, but feedback is appreciated. I can’t see myself adding new areas or chapters, but new conversations, rebalancing, or even new characters are absolutely fair game.

EDIT: Changelogs for newer versions are below.

Jesus Christ, i thought you meant 4 regular sized chapters when you talked about your project. This sounds like an really interesting idea, kinda reminds me of Warcraft 3’s Campaign maps where you go from point A to point B, those were always my favorites. I’ll download and give it a try after i get home.

Awesome, let me know what you think!

Oho! I will definetly check this out and post my feedback!

Edit: so i am going through ch1 atm, and the first impression is as follows: too much terrain. Especially considering you only have 2 footies, while the rest are horsies, everything is going a bit too slow for my tastes atm…

Also i do think Awareness should give EXP. Even if it’s abuseable…

So… Maybe I just somehow missed an event flag, but I cleared out the first part of the first map, visited all the houses (I couldn’t visit the village for some reason), and there was no bridge over the river so I just walked the main lord all the way through the map. I’m assuming there was supposed to be a lot more and not just a giant empty map that one person strolls through, right?

Did you visit the special looking house in between the two gates?

I visited everything that gave me the “visit” option. The special house that looked like a village did not give me the option. There’s a big cheese here regardless because I can just not hit that house and walk the main character to the end of the map and get to chapter 2

I mean, you can. Were you dashing or using a skill that prevents you from using an action other than wait when moving onto the village? 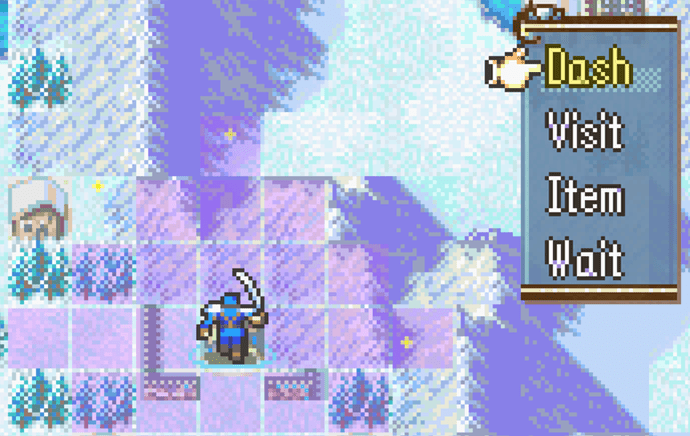 Just tested, and it’s fine for me.

With that being said, heard you on the cheese. Fixed that possibility for next release.

The terrain is a fair point. It lightens up as things go on, but I was definitely afraid of the reverse: too much open space and too little to see. Toning down some of the forests is probably called for.

I disagree with Awareness but I see where you’re coming from. My key concern is that Imani is a godlike unit whose one weakness is her frailty. Infinite xp therefore presents a very good reason to grind her up, which I don’t want to encourage.

I see. I am a big idiot that was visiting it like a village in regular fire emblem games. Like between the gates and not in the house. Whoops!

No, I think I made a mistake by being too implicit about things. I had hoped that showing a house that looks like the one that you had to visit to leave Laatena would encourage players to go there. In hindsight I should have pointed the camera at that house and made it very clear where to go.

I disagree with Awareness but I see where you’re coming from. My key concern is that Imani is a godlike unit whose one weakness is her frailty. Infinite xp therefore presents a very good reason to grind her up, which I don’t want to encourage.

How about adding a Turn limit to the Exp? Like, After Turn 20-25 Awareness doesn’t grant exp anymore?

The terrain is a fair point. It lightens up as things go on, but I was definitely afraid of the reverse: too much open space and too little to see. Toning down some of the forests is probably called for.

It’s the reverse atm. Too much terrain that makes it no different from one big terrain map. Feels more like a reverse FE4 atm where instead of Horsies being ahead, Footies are ahead (especially with Lord’s dash) and Horsies are trying to catch up…

Regarding SP, do you only get SP for triangle advantage hits, or is there another way to get them for units such as bow or staff users?

I’m not far in, but I just wanted to make sure there’s a way to recover SP apart from WTA attacks.

a.k.a if you’re bad at the game and don’t like purposefully handicapping yourself you have to spend more time doing the same thing all over again instead of trying again that same turn and if you dug yourself into a deep hole with no way out then you either need to just accept it or redo the entire chapter.

needless to say from this comment I do not like this change because this was the one good design choice Genealogy had.

Just to confirm, but is Clint supposed to be unable to counterattack? Whenever he’s attacked at 1 range, he can’t counter and is shown to not be holding any items. Is that intentional?

Uhh… yeah! (I started this before your video came out, I swear!)

You used Dash on the last player phase. Dash gives Clint insane movement, but makes him unable to attack or counterattack. If you feel that the description is unclear let me know, I’d be happy to change it.