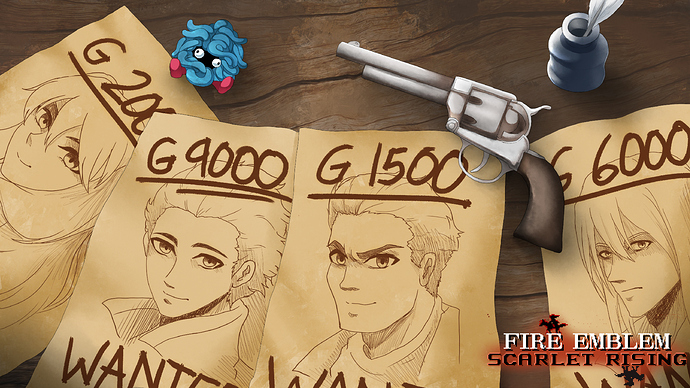 Scarlet Rising Promo Image2033×1144 958 KB
Hacktown. By day, an unsuspecting town known for its mining operations and peaceful atmosphere. By night, one of the most dangerous towns on the continent, where adventurers and outlaws alike indulge in the thrill of high-stake duels.
One day, a famous rescue team receives a vague and ominous letter alerting them to a crisis in the town, and they set out to investigate…

Throwback to late March. I was quite literally days away from packaging up the THHG’s assets, ready to release them out into the forum as a sort of send-off from the hobby… Then life suddenly said no and had other plans. As strange as it sounds, one night I dreamt about a Wild West-themed hack, something reminiscent of the Western Isles but with my stuff, a bit more style, bit most importantly… GUNS.

(Some might say I’m too obsessed with western stuff)

I tried to forget about it, but I just couldn’t shake the feeling that it could be made. If it wasn’t for a conveniently-timed contest deadline, the wonderful @Pandan giving me some much-needed encouragement, and @Pwntagonist giving me the metaphorical wake-up call I needed… this probably would’ve just stayed a dream.

The usual suspects @Glacoe and @Tamborrino are back in full-swing working their magic to bring my creation to life, whilst a few House newcomers like @Bloopy, @tristan_hollow, @feels and @Fatih chipped in to add their much-welcomed flair.

I could drone on about the hack and its features for ages, but I think I’ve already hogged too much of the stage. Well, what are you waiting for? Dive into the action-packed, gun-slinging saga of Scarlet Rising!

As wise uncle Kojima says, Rart Emblem is back baby!

This is… Tom’s House Requiem.

It has wonderful music, a man with a gun, THE Johnny Tamborino and a yugioh 5ds reference. 10/10 would recommend everyone to play

if only i could’ve fit Kizuna Bonds in there somewhere…

“For his neutral special, he wields a GUN.”

Is Roy in this hack

IS LOT IN THIS HACK

Asking for Lot in an FE hack? Looks like I’ve found a man of culture.

Btw, just wondering about how long this hack is, in chapter numbers. I’m interested, but I’ve got a long list of rom hacks in my backlog. Something relatively short or quick would probably take near the top of my list, though.

I couldn’t sleep so I scrolled through twitter and saw the promotional art then rushed to the site.

multiply that mind blowing by times 3 due to being fueled by caffeine and being awake for nearly 24 hours. I can’t wait to play this when I’m free from school work

aw pret you’re too kind, glad your priorities are straight

Oh, that’s really cool! I’ll probably play this soon, then. I’ve always been interested in 1 or few chapter projects, lets me play more Fire Emblem without commiting 20 something hours to it.

Yee…
and I cannot stress this enough…
Haw

This looks real cool, @Xenith. Great idea, I love all things Western themed. What is the “Time” function? I’m interested to know about that