So, after spending my day ripping, writing out offsets, and keeping track of index numbers, I’ve got a rip of all the FE6, 7 and 8 Weapon icons.

It’d be good if everyone shared their custom weapon icons as well.

There are at least two versions of each of these, other than the ice, here.
Gosh this was a small and easily missable link before. Here is the main weapon icon zip.

Someone suggested changing all the Thunder spells to be blue, so they weren’t competing with Light magic for colors.

The main weapon icon zip has been updated with the blue thunder spells, as well as two colors each of two versions of Thoron, and a legendary tome icon designed to look like all three types of anima.

As always, everything I post is free for anyone to use for any reason in any way.

Have my shameful attempt at a dragonstone weapon level icon?

These are all open source (and are also approximately four or five years old, but whatever)

It reminds me of sth I did 2 years ago:

What’s more, here is a sheet of some icons of FE4 legend weapons I found on jp sites( but it is claimed to come from en community so I think you may already have it):

After finding a tool, and learning some bash scripting to automate it, I present to you all the FE5 weapon icons in GBA FE colors.

Too much free time and insomnia creates things.

Everything in the main weapon icon zip, everything released under the WTFPL, whole nine yards.
Have fun.

I… I really love those books.

If you love them, use em! What’s the point of making something like this if no one uses them?

That’s a pretty baller license you released those under.

This is now my favorite thread.

If you like it, Contribute! You can’t ever get better if you never work on it.

Feel free to use any of them in any way. You know the licensing.

Feel free to use any of them in any way. You know the licensing.

This is the best possible license I have ever, ever read.

So, after a grueling several hours, I’ve managed to make a compilation of all of the icons that I’ve made over the years that are free for anyone to use. Since most of them are old (probably averaging from around 2008-2009, but there are ones that are even older on here), I’m not even going to care if people want to tweak them to their needs.

I’m going to link this solely as a Dropbox link as, should I make something else that’s free to use, I will simply update the file and append in an edit to this post (unless it locks you out after a certain length of time) noting what’s been added. (I also very rarely do stuff with my Dropbox, so the link should always be valid.)

(Background color legend:
Green = adaptation of existing FE weapons/icons (mostly FE9/10 stuff)
Yellow = icons made for Arch for Elibean Nights (that are completely new and not versions of things like the Rusty Coin) that he has allowed to be free to use
Blue = icons that I’ve done over the years either for myself or defunct projects (some of which may have been appropriated by Arch or other projects since)
)

I’ll also tease that I have an enormous project that I’m ever so slowly chipping away at that is going to be an entire package of free-to-use icons. I’m just not nearly close enough to show it yet.

EDIT (5/23/15) - I’ve updated the sheet with a new icon that I forgot when initially compiling the sheet, my take on FE6’s Eckesachs.
EDIT (3/29/17) - Link updated to due Dropbox being dumb.
EDIT (Jul 7, 2017) - Ditto the previous update. >:o
Also, at some point I did a new version of the Bolt Axe and added that to the sheet as well.
EDIT (Nov 25, 2017) - Remembered a few old icons that I hadn’t included on the sheet as well as a new version of the Cleave Bow for EN since the old one was absolutely ancient.

So, these aren’t really weapon icons, per se, but they’re similar enough, so I’m throwing them in here.

I made these a long while back for A Sacred Dawn, but seeing as they’re not being used and they’re basically just GBA versions of icons from FE10, I’ve decided to make them available for anyone that wants to use them. (I would have uploaded them sooner, but I legitimately forgot that I even did them to begin with.) They use a different palette than the default one that GBAFE uses, so I included the one that mine uses on the left-hand side in dot form.

(Earth replaces Anima and the design on Ice is actually completely new - think of it like a hybrid between GBAFE’s Ice Affinity and FE10’s Water Affinity.)

I love your licensing

Whoa-ho-ho.
I remember making that aaaaages ago.

Damn.
Like, that’s some original FEU and FEND shit right there. 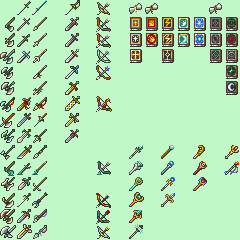 These are all free to use/edit. It’ll probably be updated for as long as I continue to make them.

Even though I’ve long since stopped playing Heroes, I felt the desire to make these a little while back and since Heroes will be in Cipher’s new set coming out this week, I wanted to get these finished before it came out (timing felt appropriate, given that I had four of the five done as of two days ago).

Given how difficult a couple of them were, I’m in a happy mood from finishing, so I’m going to post them for anyone to use (should you have a reason to do so…?).
(Heck, make a short hack featuring the Heroes characters to learn the ropes or something, I dunno.)

(Update 5/18/18: Replaced link with new version. Now no longer features the 4x scale versions on it.)

Here are some of mine that I’ve made. Some are better than others.

They look much more accurate to their canon and FE:Heroes versions.

Edit: Audhulma has just now been done and I lengthened the blade on Durandal. I went back and used the Awakening icon of Sol Katti for reference in making a much better version, replaced the old one and uploaded a better Siegmund.