The Stronghold tileset is in both vanilla FE6 and FE8, representing grand castles home to critical plot twists in maps like The Neverending Dream and Father and Son. Despite this grand legacy, though, it rarely sees use in FEGBA hack projects. Even similarly grand palaces merely use the Castle tileset or similar, abandoning this tileset to the mists of unused assets.

And even the hack maps that do use the tileset often fail to understand how its floor tiles function. While I can’t force you to put Stronghold maps in all your hacks (well, I can try), I can at least teach people how to use it properly.

Feel free to redistribute the images provided in Parts 1 and 2 of the tilesets parceled out into tutorial bits, as long as you credit me. 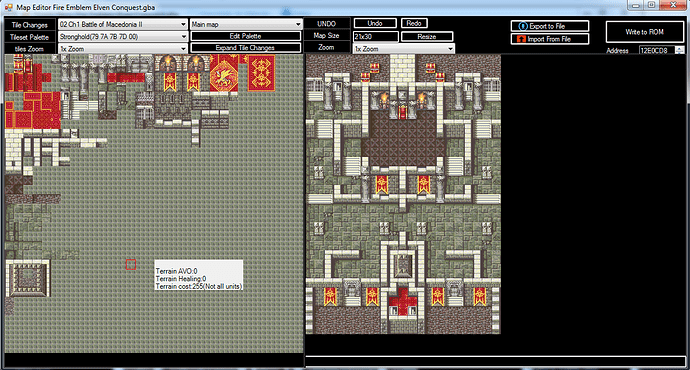 Well, I am surprised that the fortress tileset is hardly used, I personally would only use it … well, as you say in important castles, I think that the fortress design imposes more than the castle the fortress one gives you The feeling that you are in a very difficult place that you will not be able to pass it in 15 turns, also apart from being castles it can also be used for jail.

If you allow me Random Wizard to publish a fortress map (not jail) to show that it is also good to use that design.