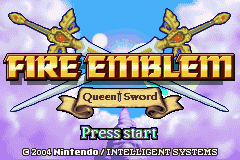 Well this took longer than I had planned, but I was able to finish it in the end!

Hello people, I hope you are in good health and having a good time in these difficult times, today I come to bring you a translation that I have been working on since approximately the beginning of April, I should have been able to publish it a month and a half ago but as you know sometimes things don’t work out the way you want them to haha.

is a japanese rom created by “GX”, here below I will leave you a small but brief context of what it is about and some images.

Without further ado, here I present to you Fire emblem - Queen’s Sword!

This was my grain of sand to this awesome community, greetings and have a good play!

Edit: I said it before, but if you happen to come across a bug that doesn’t allow you to keep playing, let me know and don’t worry about your saves, you won’t lose your progress.

oh so this is what you’ve been working on xD
anyway, great job on its completion buddy, mine still has a long way to go haha

Don’t worry you got my support! you can do it!

Which version of FE8 does this go with, since it doesn’t work with an American or Japanese ROM (unless my roms are bab)

Let me check again, it’s should work with the usual FE8

Edit: It work like always thought my FE8 is .GBA but i don’t think that matter?

Edit 2: Perhaps I use the EU version? give me a moment please

Edit 3: Sorry about the late will try to upload it again, my internet is slow so please wait a moment!

Edit 4: alright I’m uploading it again, can you in the meantime confirm if you rom is bad?

The patch seems to work with an American ROM, but it crashes as soon as I open it.

However, I could not patch it to my Japanese ROM.

It’s use a US rom, sorry about that!

Alright, please wait until the other patch upload, I’ve tested it and it should work.

Edit: Please until I upload the other patch, will appreciate if you people can all tell me if you too have problems!

it works for me now. also thanks for translating this hack! now i can’t wait to see some of the others translation… like sword of heaven and earth and the rest of 2 princesses.

I’m glad it worked out! I hope you enjoy it! Any feedback is welcome!

Even with a new clean ROM and downloading from the new link, I still can’t get it to work.

What emulator are you using? with visual boy it’s work for me just fine.

I got it to work.
I had to use Tsukuyomi as the patcher instead of NUPS

Yes I use Tsukuyomi to create the patch, should I use NUPS instead? sorry about that Green.

Alright, thanks for your patience, I hope you can enjoy the game and of course thanks to your video about the Queen’s Sword is that I had the motivation to do this, so thank you! And you Hack rom is really awesome!

Alright guys, I updated the patch again, there should be no problem now with the NUPS patcher, sorry again for the problems!

Oh hey, I’m playing the game and I liked the translation very much, you did a great job

I don’t know if this is the right place to ask, but is there any recruitment guide for the game?I fell like i’m losing something.

Hello and thanks for playing, I’m glad you’re enjoying it!

Well, most of the time you just have to be careful that nobody dies and you will be fine and pay attention to some hints here and there, I will make a guide for that later, just give me some time

Edit: Alright, I updated the post regarding that, hope that helps you! sorry if it’s a little vague!