Alright. So I have been working on and off with my romhack. So far I have completed three chapters but have been busy with implementing other things like skills, commissioned portraits, and rewriting the story and dialogue.

Gotta say that it’s a tiresome but STILL an exciting task.

ALSO! I have yet to name my hack, I’m trying to consider a title with Steel in its name. Like Steel Heart or Feathers of Steel, I don’t know. It’s a WIP so I guess I can call it uhhhh, Project Steel? Maybe?

I would first like to thank the amazing artists that helped make some of these portraits possible! Such as
Glaceo, HusbandoEmblem, and Yasako. I have a lot of placeholder portraits for more characters that I plan to have visuals for very soon but let me just go into detail about what I am planning to do as well as what I HAVE done so far.

The Ulkfold Empire is an old and powerful nation, finally reaching peace with its rival country, the Kingdom of Centaurus. At the cost of a small portion of the Empire’s own land, the two nations maintained peace for over half a century… until Empire’s Capital was suddenly attacked by invaders. An unpredictable invasion that came at the cost of the Emperor’s life, bringing chaos to its people.

Confused and on edge at this unspeakable event, they pointed the blame at the Kingdom of Centaurus, shattering the peace between the two nations and bringing forth a new age of war.

Our protaginst, Lenora. A young aspiring knight of the Ulkfold Empire, filled with ambition and excitement for the future will soon learn that war is not as pretty as the storybooks have led her to believe. She and her comrades will inevitably follow a path against the interest of her own motherland and the Kingdom she swore to fight against. Discovering the true motive behind this gruesome war.

-Credit:
For the Sprites:

Special Thanks to the people that got me into this:

Judging from the stat screen and the reference to FE8 in the progress report, yes it is.

Good luck on this hack.

Thank you so much

The fur on Ylva’s mug

Ohhhhhhhhhhhhh, looking forward to what you’re planning to do with that!!

Hello everyone, it has been a while since I updated my progress and it has been very slow if I have to be honest. I recently finished finals and will soon start my next course very soon so I decided to leave a post showing all the improvements I have done to my romhack that I have now given an official name.

The name is Fire Emblem Steel Over Blood.

I will now split this post into three parts. The major updates, plans, and of course, credits.

-Major update to my progress report:

-I would want to add more custom skills for specific units, Wrath of the Crusade has shown me possibilities on how to approach that idea in very interesting ways and I hope to implement them well. Though my lack of experience in coding could make this longer than necessary, I may consider looking for someone to aid me with that part.

-One of the various reasons I take so long to complete specific tasks in my hack is that I tend to overcomplicate certain tasks. For example, I was put off into making scenes in chapters similar to the Sacred Stones cutscenes before the first chapter. Then I realized it was MUCH MUCH easier than I thought.

-I want to at least get fully custom portraits for all of the characters in the first half of my story, as I have this idea of completely switching POV with a completely different character after a certain chapter. And it’ll be focused on the newly introduced second protagonist playing catch up to the first one.

-I really want to look for an animator to commission for a Fate’s kitsune-style animation. As I want to replace the manakete class with a Kitsune class. I still haven’t found anyone sadly.

-I really need some gameplay balance consultant, lol. I just don’t feel satisfied with some of my enemy placements.

-The story still hasn’t been drastically changed but various sources of inspiration influenced me to tweak certain aspects of the romhack.

I will be busy with studies again but hopefully, I can return with more progress to show to you all. I aim to release a beta of the romhack at some point and hopefully it’ll contain at least 6 chapters, that is the plan. So, I hope everyone can look forward to more potential news of my romhack, officially titled Steel Over Blood.

Thank you for reading and have a great day.

Got a shoutout from BlindArcher on 5 portraits I commissioned!!!
You could check them out through this link: 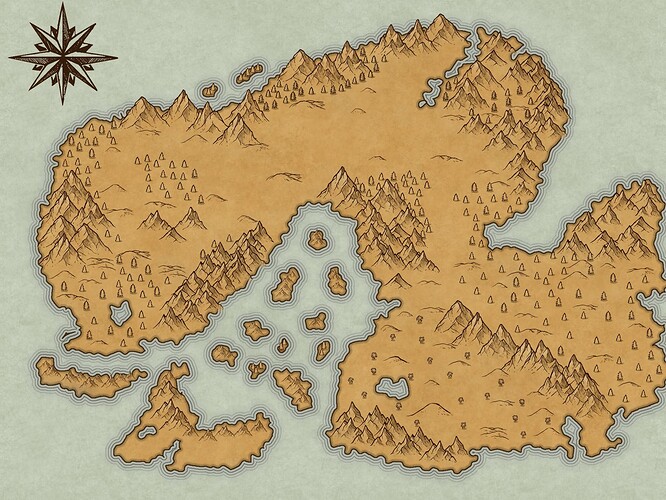 I can now officially say that I am ready to start making an overworld for my romhack and it is exciting yet intimidating.
It did clip a bit of the map but it’s no big deal.

I also have two new countries to introduce:

Yarhook: The kingdom of Golden sands and beauty. A strictly religious land that harbors close relations with Ulkfold.

The Iron Plains: Once part of the Ulkfold Empire’s territory but soon cut off and became its own independent country after the great war between Ulkfold and Centaurus many years ago. It is ruled by several Lords who work together as a republic. Despite their relatively new foundation in the continent, they gained a close alliance with the Kingdom of Centaurus. Preventing the Empire from retaking its land.

Uhhh, a lot more portraits have been commissioned but I want to keep them a secret until further notice and Busk is now officially the fifth artist I commissioned, starting to feel like I’m getting prominent artist’s to participate in my work and it’s getting really exciting.