I’m really new to the ASM scene here, but I’ve got two different things working now and I told myself that as soon as I had more than one I’d make one of these ASM collection threads in case anything is useful to anyone else. Let me know if you run into problems with anything here, I’ll see what I can do.

Can’t thank the folks in #hacking-help and #spell-academy enough for their generous tolerance of all my questions and willingness to help me learn rather than just telling me stuff, you’re all fabulous and the community is lucky to have you.

Working on getting more comfortable with GitHub, so that’s where all my files will be hosted. Here’s a generic link to what I’ll use as my ASM page, but specific links to each hack are found in their sections.

I’ll update this first post with new stuff using this same format every time I have something new to keep it all organized, though I’ll make a new post for each as a means of announcement.

14 Likes
Getting Started with ModularStatScreen - A Pretty Verbose Introductory Guide
Pawkkie July 26, 2021, 3:19am #2

Had a pretty productive weekend between this and the MSS guide, but have something new to share that isn’t related to the stat screen for a change.

This hack separates player class growths from enemy class growths when you’re in “growths = character + class growths” mode with SkillSystem. I really like custom class growths but wanted to be able to make dramatic changes to what my units have access to without worrying about affecting enemy balance, and this is my solution.

Vanessa here has 0 personal growths and 100 player class growths, while the enemy Nomad is using the unmodified enemy growths. 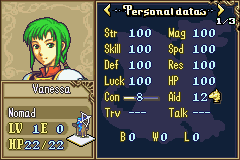 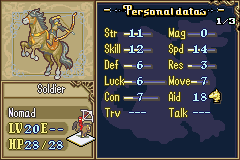 Note that if a negative class growth would push a character’s growth into the negatives, instead it’s locked to a minimum growth of 0.

This stuff is hard to take interesting pictures for, but here’s Vanessa with 100 personal growths and -10 class growths. 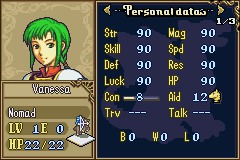 Links and details once again in the main post, check for anything flagged UPDATE: in the Separate Player and Enemy Class Growths section.

Somehow made a hack that’s even HARDER to take an interesting picture for than the growth split, and that is Separate Unit and Class Bases.

This is not a gameplay hack, but is instead a “making a hacker’s life simpler” hack. It allows a hacker to decide on a character-by-character basis whether that character’s bases should be added to their class bases, or whether they shouldn’t, with a simple .csv file (Edit: Vesly convinced me that using an event table and a macro was cleaner. He was right. That’s what this uses now instead of a .csv)

The application here, or at least my motivation for writing this, is that I was iteratively tuning enemy class bases for balance purposes and super quickly got annoyed at the prospect of having to constantly update my character bases every time I changed their respective class’s tuning.