To anyone showing up on this page, I have great news on the progress of Diamond is Definitive!

Hey guys, we’ve been made aware that there’s some assets that haven’t been credited as of yet. Don’t worry, we’ll update the credits as soon as possible. Thanks!

Well, I compiled all the credits together (finally, after a whole ass year+ more), apologies for taking this long.

If I missed an asset you created please notify me

and now we wait for tzar to actually update the page (whenever he notices my ping), please take your complimentary jeopardy music:

i’m necroposting in this thread because i (hypothetically and technically) own this hack (with the team, ofc) and wish to give an update on the absolute state of it

so the final grugdate will probably come out in the far future, in a time where everyone’s probably forgotten about it…but for a good reason (other than the fact that i’ve spent the last 6 months of my life working on Touhou Emblem)

well i mean first i have to say that the Brazil project we mentioned in FEE3 2021 is cancelled because we all lost interest in it, so no more Grug “Gaiden”

nah instead you get this: 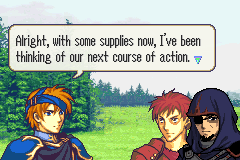 Oooh I wonder what this could beeeeeeee

So that’s what’s in store, I hope you look forward to whatever the hell we’re making next. Thank you to everyone to played Grug 1. 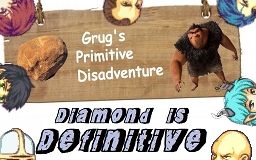 Welp, 3 months in the future is pretty far for me due to my eternal impatience, but Diamond is Definitive is nearly out! I’ve finalized a bunch of plot stuff + new characters to fit in with Grug 2. I guess you could treat DiD kind of like the Ultra Sun & Moon to Sun & Moon, since I’m also updating the plot and a good bit of the gameplay. Along that is gameplay updates, and new portraits for old characters! I hope that you’re looking forward to checking it out once we’re done testing it!

And ofc, Grug 2 has also been announced, if you haven’t seen the thread for it yet:

[grug2baby] Play the OG Grug’s Primitive Disadventure here: Greetings. I’m Rye on Speed, lead hacker of Team Stoned Stoners, a hacking team consisting of a ragtag team of people who happen to have an array of talents. You may have seen or played our previous work, Grug’s Primitive Disadventure, a decently sized romhack centering around the escapades of Grug, an awakened caveman, and his motley crew of weird characters, featuring a large dose of weed. For 5 months now, I’ve been working on…

Grug 2’s currently about 20/27 chapters into completion, so expect it to be released…uh…sometime that’s less than half a year?

That’ll be all, until Diamond is Definitive is released!

So I kinda laid off writing the last 8 support chains until now lmao, but I’m almost done, so release is soon:tm:

Look forward to Diamond is Definitive, AND Grug 2 (currently in playtesting phase), coming out at an undisclosed date!

Considering the name of the team, I’m guessing that this hack is an FE8 one?

no, it’s clearly an fe4 one as you can see by the obvious fe4 graphics in the screenshots smh

You didn’t have to be sarcastic with me, Rye.

Until we are done, have this small lore snippet that I wrote down in our private discord. It’s not really important for anything plotwise, just something to think about. (Minor plot spoilers)

I AM PROUD TO ANNOUNCE

THAT EVERYTHING IN GRUG IS COMPLETED, DONE, ZIP, ZERO, NADA TO DO

Well, until someone finds a bug or an issue, that is.

But until then, please enjoy Grug’s Primitive Disadventure: Diamond is Definitive! Featuring new characters, new gaidens, new shit all around!

And then we can release it!

It ain’t a Rye hack if Rye doesn’t immediately follow a release with a bugfix and balances patch not even a week later!

So:
-Fixed a bunch of bugs that you probably want fixed.
-Buffed God’s growths a shitton
-Nerfed Flexbot’s Res to 5%
-Replaced Kempf’s portraits with ObsidianDaddy’s Kempf

Oh, the font’s normal again. Did the custom font count as a bug?

no, it was just something we had in for awhile and i just changed cause i finally decided that I couldn’t really read it anymore

Bad hack, xavier bullied me in the discord