Hello, all. My name is SD9k, and I’ve made a…thing. This thing should not be played by anyone who wants to keep their sanity. This thing was made as a request by a masochistic individual over on the /r/FireEmblem Discord server. So I decided to spend a few minutes making something I though would never be played or talked about ever again.

To my surprise, however, people actually became interested in this. People started looking into it, and some even actually started playing it. I’m still baffled as to why somebody would put themselves through the torture of playing this.

Anyway, enough backstory. You’re here because you heard the words ‘Fire Emblem 7 with 0 bases’ I’m sure. Well, here it is. I have made a hack in which all playable units start at level 1 with 0 base stats, except for HP, Con, and Mov. All playable units have 1 HP, and have their vanilla Mov/Con stats. I have also increased the level cap to 30, and increased exp gain. 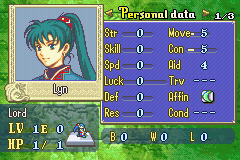 I have also made an easier version, per request of some people over on the /r/FE Discord. The easy version lets prepromoted units such as Marcus start with roughly half of their class’ base stats. Some units have been moved closer to the players’ starting position to make them easier to recruit. In addition, I have included a .sav file with all modes unlocked so that you can avoid going through Lyn Tutorial Mode.

Here’s the link to the .zip file containing the .sav, and the UPS patches for both the easy and “True” versions of this hack. If you have any questions, or notice any problems, let me know. I’d like to think that between myself and a few others, namely Borsthestylish/Angry Bors, we’ve gotten most bugs and mistakes ironed out, but you never know.

TL;DR, I made a hack for FE7 where playable characters start with 0 base stats and 1 HP.

Q: Is this even possible?

A: Yes, I’m playing through it right now and I’ve stopped rigging by chapter 15.

Q: Can this be beaten on LNM?

A: Nope, you need to play on LHM or the two other lord’s routes.

Q: Is there any exception to the 0 bases rule.

A: Athos has some stuff going on but he isn’t base Athos.

Q: Can the NPCs (Jaffar, Wallce, Pent, etc.) even survive?

A: we changed their starting locations and Wallace is now an enemy, not like he’ll kill you lol.

if anything, i would say that this is proof that bases > growths – 0% growths is way fucking easier

I hate the argument over this tbh. It’s situational. The longer the game the more growths matter, so there is no absolute answer and it depends on if the late game gives you pre-promotes with bases good enough to carry you. If this game theoretically went on forever it doesn’t matter how high you set your bases, if you didn’t have any growths you would still lose. An infinitely scaling FE7 would be winnable without bases, but not without growths. Or maybe try beating the game without pre-promotes and without growths and see how that is.

Finally a hack where people can legitimately say “Nerf Nino, that bitch is OP.”

Edit: Why the fuck was this at the top of the board if the last reply was three months ago?

someone probably replied then deleted their reply

not that i’m aware of, i don’t even know if deleting comments here is possible, if it is then i’m a dummy

Sometimes edits of comments make topics jump to the top. Stuff like that. Discourse is weird.