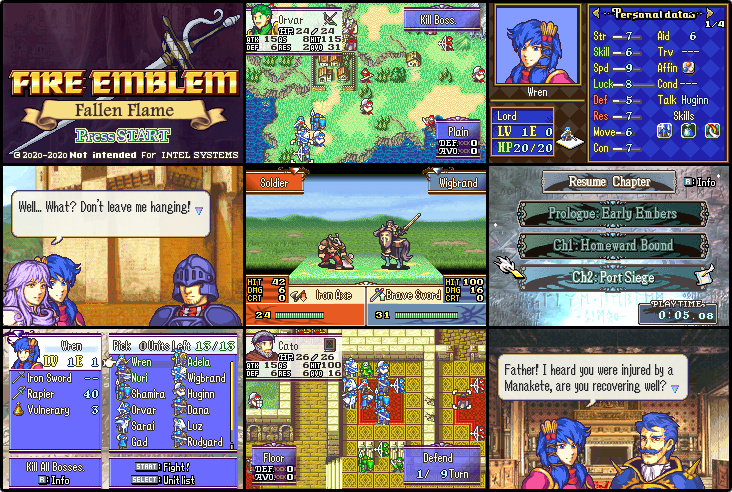 It’s been long overdue but I’ve finally made the project thread for this hack. Fire Emblem: Fallen Flame follows the campaign of the Spectrum War from the perspective of Wren Osprey, which takes place during the year of 903 AA, in the continent of Balhutia.
The war is fought between two different alliances spanning the entire continent, the player’s side comprised of the Blumari Kingdom, Eastern Viripurian Empire, Western Viripurian Empire and the Gofaul Free-Tribes. The enemy’s side is comprised of the Wyvember Empire, the Golden Revolutionaries and the Gofaul Confederate.
Wren will embark on a quest to drive the Confederate invaders out of Blumari, crush the rebels in the Western Viripurian Empire and drive the Manaketes well away from the Eastern Viripurian Empire while work on a legendary weapon to weaken the Manaketes for centuries to come is underway.

Or to put it short, Wren has to kill some Dragons, along with her many friends.

Known Issues That Have Yet To Be Resolved:

If your name isn’t on the credits and should be, please let me know! I will happily rectify the issue. I’ve done my best to make sure everyone is credited appropriately but if I’ve missed someone out, I apologise and will work towards fixing it. This project couldn’t have been possible without the help of this community.

How to Patch a Rom v5 Tutorials

Step 1. Download .UPS [chrome_EketXN6hMj] Step 2. Locate Unmodified .GBA [explorer_sWzpRrelK7] How to dump a ROM Step 3. Patch Online [Link] [chrome_Th5d2fgYqR] NUPS, among others, also works. Result [explorer_Enh0swRFs5] Why can’t we share .GBAs? Ps. This guide has been made 4 times before but they were long and boring so I made this one instead.

To apply this path on PC, please use the NUPS.exe. Once you start the NUPS Patcher after downloading it, click on, “Apply an UPS patch to a file” > “File to patch” and select a clean FE8 US rom. Then click “UPS patch” and select the UPS patch linked below. If you’re an Android user, I would suggest using the Rom Patcher app. Same patching principle applies.

Please only play Normal Mode if you’re intending to give feedback on the gameplay as well. Hard mode will only be worked on after the hack is fully complete on Normal mode.

WHICH EMULATORS CAN I PLAY THE HACK ON?

Debug mode is being left in until the first 1.0 release.
“Edit Skills” is a debug feature.
Hard mode will be worked on after the first 1.0 release.
People can poke through my mess of a buildfile if they want, but please don’t post spoilers found in side to others without marking them and warning them appropriately.
Pikmin says the hack is extremely epic. Thanks Pikmin.

Check out the FE Fallen Flame community on Discord - hang out with 48 other members and enjoy free voice and text chat.

And here’s the discord. Please read the rules.

The rep for FE: Fallen Flame. Contribute to Zmr56/FallenFlameRep development by creating an account on GitHub.

And the github. Feel free to be horrified by the state of the buildfile. Spoilers inside.

A gitbook guide for the game is planned for later down the line. It should serve as a good wiki resource.

Had a good time playing this at FEE3. Congrats on the release!

Damn, I’ve just played through the first 3 maps and I have to say this seems really well thought out. Enemy placement and stats are both really good.

The only bug I’ve encountered so far is the wyverns in the second chapter. They just disappear after attacking the player even if not killed.

Huh, I thought that was only the Ch4 ones but seems like it isn’t the case. Thanks for letting me know.

It happens in Ch3 as well with the wyverns on the bottom right.

Guess it’s all enemy Wyverns then. I’ve only seen it occur against the Ch4 ones myself.

Was playing through earlier, and wanted to talk about this on the Discord but it seemed pretty ded so I decided here would be a better place.

Another thing I notice is that this game doesn’t like units doubling. Like, outside of a few units like Wigbrand, you just don’t double a lot. I get that early on, doubling shouldn’t be universal for everyone. But Ch.3 is just a bad map where you really shouldn’t make it a defense map, especially when player characters struggle to deal with the enemies properly. I feel like the reinforcements are simply too much for players to handle this early on in the game. Your units simply aren’t developed enough for players to handle this map. Couple that with Cato’s AI, and it’s simply just not a good map. It would be great if the reinforcements aren’t so relentless or if the player units are prepared to deal with the map. That, or just don’t make Wystan so pathetic that literally any enemy that sneaks past will immediately result in a game over; it just adds an unnecessary restriction on the player’s side imo.

Thread page has been updated with two separate download links for releases, since having the releases link directly to the GitHub where everything is very much in a state of flux has turned out to be a less than optimal idea.

I’m carefully considering your responses and solutions to the problems brought up but I’ll give a proper reply once I’ve figured out how to tackle them. I’m still mulling over ideas that I’d feel satisfied with.

the enemies in that chapterare more than manageable in normal mode, you can even steal the boss’ energy ring and then kill him. and the enemies on every chapter can be doubled by your fast units

hard mode is a whole different ball park and i struggle to hold on past turn 7 on every attempt (about when the knights and wyverns spawn from the east), but the main post clearly said that hard mode hasn’t been balanced yet. it is simply the normal FE8 hardmode bonuses on every enemy which ends up overwhelming you