A new hack on FE7. A young soldier named Ragnar, who is a simple knight under oath to Azalia (country), is aiming to make a difference. Silvatica, a country that recently had a changed of heart, began its invasion against neighboring countries. In their invasion, they’ve not only captured many people to be used as soldiers or slaves, but also have destroyed entire cities and towns. Upon their attempt of taking over Azalia, they failed and suffered defeat for the first time. Due to rage, Azalia declared war. However, things didn’t go accordingly and now Azalia suffers in the palms of Silvatica as well as the others. But, only one knight has the will to stop them.

Can he really make a difference?

The patch will include 15 chapters: Prologue to Chapter 13 with one Gaiden chapter (Two stories). 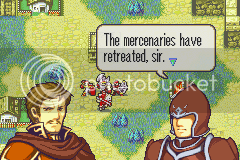 P.S. if you would like to LP it or as such, please ask me first and I’ll give you permission

Happens to be the name of one of my friend irl, hahah.

Good to see you here NYZ!

NYZ, the link in the OP is broken.

Good to see you here NYZ!

Seconded, nice to see you bringing your stuff here(I’m Kitty of Time btw).

Updated the link with recent patch.
Thanks Agro.

And thanks everyone, it’s good to be here

Idk if I’m playing an outdated patch(I don’t think so, I downloaded on friday); but one of the doors in ch10 can’t be opened. I don’t think that’s intentional.

I’ll have a full report when I get to the end of the patch(currently on ch12 I think)
Overall it’s pretty nice though(sans the amount of enemies+lack of money to get weapons+enemies giving no exp+NO PROMOTION ITEM FOR RHIONA D:)

…WAIT
The updated patch is going to be released after fee3; maybe I should just wait for that before making a report.
I’ll do that!

Yea, its been resolved in the current makings.
Exp is given back in chapter 8x and 10.
A lot of chapters have been redone differently.

A patch will be released after FEE3 as you stated so I would wait until then.
Thank you though!

So FEE3 patch has been submitted and chapter 9 will be LPed. It is a completely revamped chapter with tons of new stuff.
Be sure to watch those changes in action on August 30th!

Wondering who’s the new character? Just have to find out August 30th!

Credits to Nickt, Solum, and GabrielKnight for graphics.

It’s been a very long time since I’ve played the patch that I played, but I like the new(?) palette on the first map.

That’s just fe8’s renais castle(and it was in the last patch).

-opens up version I have buried in folder somewhere-

I approve of the spreading Druss references.

Thank you to the community and MageKnight404 for this exciting event!

Here is the video to my entry on FEE3. It deft was a huge success!

Ladies and gents back from the depths…

Original plan was to release the patch after FEE3. However, school started and got mad busy with that and landing an internship on top of it.

Now, I can present to you the patch VERSION 2.5 updated in the OP.

Known problems:
Some palettes are still yet to be changed.

I know I’ve been releasing patches to only have content from Prologue to Chapter 13. That’s because I still lack the graphics I need to continue. Huge thanks to Lenh for a couple of sprites she gave! However, I still need a couple for chapters 14A and 14B. Spriters are still available to help out if desired.

I am hype. I’ll have to sit down and play this when I’ve got a bit more free time.

Nobody has yet LPed this… but I do want to. Now that TRTR has gotten like 3 LP’s and all the other good hacks have been played, this is the only one left. I must do it soon…!

@cam. Praise feuniverse to have me back lol

Sorry guys, updated the first post with a bug fix patch. One of the weapons didnt have the right animation so I quickly fixed that.