Hello everyone! Fire Emblem: Endless Nights is a rom hack that is being written by @GuyLowen and coded by @Clendo. We are super proud to show off this hack in time for FEE3 this year! Currently we are still very much in the demo phase of development on this hack, and there are many things that are still a work-in-progress. However, we hope you can still enjoy the 3.5 chapters we have finished so far, and can keep this hack on your radar as time goes on!

We hope you enjoy!

Accidentally uploaded the debug version lol. The link has now been updated with the correct .ups file.

Looks promising, Its nice to see a hack use Laguz mechanics

I think I’ll give it a try tomorrow.

Tommorow became right now because I had some down time on my way back home from work. I had a lot of fun but my progress was stopped by a gamebreaking glitch in Chapter 2. 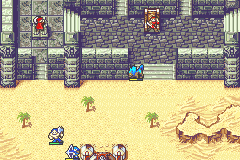 The game gets stuck here, I think I can point the culprit to this being the thief, since he has 0 movement. Not sure otherwise, it doesn’t seem to be the boss or the enemies around him.

I have other criticism I’ll leave on your discord later. Overall I had a lot of fun of the chapters I got to play, but there’s some things that are still a bit rough around the edges.

Thanks for letting me know! I have updated the download to include a fix for this, as well as a few other updates:

Looks like a pretty interesting concept, I’ll have to give it a try. I haven’t seen Laguz in FEGBA before.