Since the thread is archived, if you have any comments/questions, please send them to me through private messages.

After over a year since it started, the final patch was released a week ago with the last fixes to issues found by players. The Readme linked above has general information about the hack as well as the credits, so take a look at it if you want to know more. Hack created with FEBuilderGBA. The recommended emulator is VBA-M.

Feel free to ask here or on the Ft. Mangs Discord channel (which may be more likely to get replies) if you have any questions. Although it’s finished, feedback is always interesting to read, particularly for me since I did the gameplay part, so feel free to let me know what you thought about it too.

It was the first full hack I worked on and saw being finished, and taking on the majority of the gameplay was definitely ambitious and at times exhausting, but I also learned a lot from it and enjoyed the experience. Hopefully those who played or will play found/find it enjoyable too.

14 Likes
The Fire Emblem Fangame Directory [Please add your own hacks!]
The problem with "mature" content in Fire Emblem fangames
Rage July 25, 2019, 5:59am #2

Good to know that this is here now, better late than never I suppose.

Hello I have a problem with chapter 15 of regi’s route.
The problem is after killing ghast, Zeke doesn’t run away so how Can I solve this please?

How about adjusting the height of the unit? 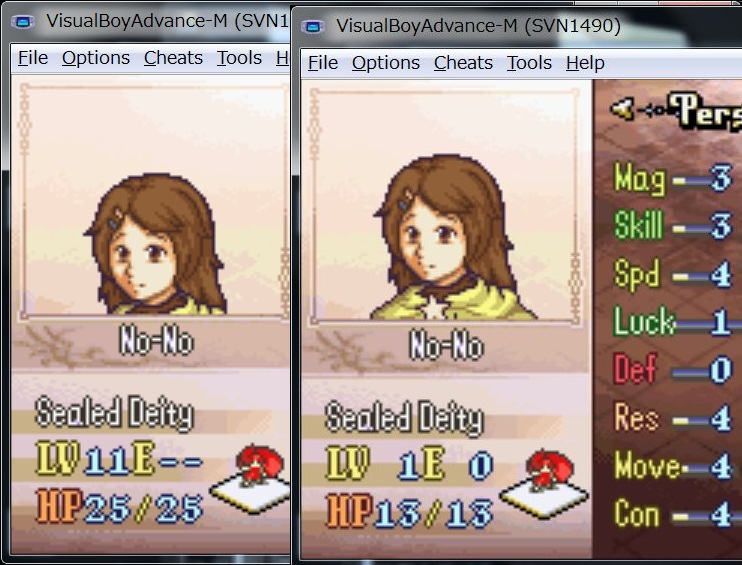 Will the songs used/inserted be released to the public free to use?

@Tomus
That was one of the reasons the last version was made, and looking through FEBuilder I can’t see how it could still be happening. It may take restarting the chapter if your savefile was from after triggering the Regi/No-No talk or defeating Ghast. You could also try triggering Zeke’s secret event, which will make it so you can rout with him still being there, but that might not work if Zeke is the last enemy.

Huh, I hadn’t noticed that. Though I don’t think more updates will be made unless something gamebreaking id found, thanks for letting us know.

The Readme has the credits and it lists the source/arrangers, so you can use it to search for the songs. Some of them were openly free to use but I think there were some we had to get permission to use, so I don’t think we will re-release the songs ourselves, but it’s more a question for @anon36681512 so I’ll direct the question to him.

Thanks for the answer the first time ghast and Zeke were the last ennemies so I tried again and this time I let a troubadour alive.

The second time I’ve tried the secret event before killing ghast and after but Zeke doesn’t run away.
And each time I have done the Regi/Nino talk so I think this is why.

Also I was playing on the version linked by Mangs on YouTube and after I’ve tried with 1.1 version during the chapter.

So I’m going to do the chapter without the Regi/Nino talk and to inform you if that works.
And I’ve seen a weird Glitch during the regi/Ghast fight :

Regi was doing Astra but at the second attack ghast uses pavise and at the third attack the damage was not halved.
At the 5th attack an second Astra was made but it lasts 2 hits.

The cause of Zeke not leaving was triggering the No-No/Regi talk, yeah, but it was fixed so I don’t know why you’re still getting it. Try the download I linked just in case, but otherwise avoiding that talk should be enough even in older versions.

And the hack was worked on for over a year, we are using an outdated skills system and there are some known bugs that you might get, as well as skills that don’t work at all. We avoided using most of them, but we still kept Astra since it’s so characteristic of the Swordmaster class.

Okay so I’m going to patch a new sacred stones rom and try to bring Zeke in another place or to kill Ghast.
For the Astra Glitch this is just something I see and no many ennemies have pavise so this is not a problem.

No offense, but why so many lancer?

People just like lance-using classes, I guess. They created their units, but we did give some of the enemies swordreavers to not make the beginning full of WTD.

Oof. At the moment nothing game breaking has been found on the rom so far (aside from a few things that were fixed already)so we don’t plan to update the game anymore. If there is a need for an update, I’ll see to it that the portraits are adjusted. Thanks for the advice.

People just like lance-using classes, I guess. They created their units, but we did give some of the enemies swordreavers to not make the beginning full of WTD.

Okay, crazy suggestion here, what if - and hear me out here - what if you changed the axe users… to sword users?

That was an alternative, but I don’t see benefits compared to what we did.

They wouldn’t have been able to go on peaks (for the brigands), wouldn’t have gotten double effects of the weapon triangle, would’ve changed their stat spread (undesirable since back then, on chapters 1 and 2, the plan was still to only make minor edits to chapters), and would’ve given a unit WTD on her join map. Looking at those differences, I’d say there are arguable cons and no pros, but I could be wrong.

Bumping the thread due to an editted version.

In this (incomplete, unless someone else wants to take over) version, bosses and playable/allied characters switch places. Other changes have been made, such as all classes having three promotion options, the summoner being changed into sorcerer (can use dark, light and staves but can’t summon), among other chapter-specific ones. Text is unchanged.

In this release, up to the route split is complete, believed to be bug-free. It’s a more difficult experience, due to the (now) playable units being weaker, not having powerful personal weapons (now it’s the bosses that have them), and there not being any playable dancers (instead of 4), summoners (instead of 3) and flyers (instead of 4), and no secret events (instead of ~45?).

Playlist showcasing up to the route split

Bumping the thread due to a 0% growths version that’s been around for a while but I forgot to post before. Apply to a clean FE8U.

My review of this game. Fair warning, this one is really long: https://docs.google.com/document/d/1fkGnYb7JcXRE2S0uMtJPsYS-1vcNk-dbmRBt07BNrXg/edit?usp=sharing

Thanks for taking the time to review the hack, glad to see you enjoyed it and gave it such generous ratings.

Incidentally, to follow the forum rules, I renamed a specific miniboss, and used the chance to fix the bug in Ch18 of Regi route that you mentioned, as well as another in Ch11 of the same route that could cause the game to freeze on rare circumstances. The first post was updated to link to that version (rip 356 clicks).

EDIT: Forgot to do this, the sound room now has all music available from the start (due to the reports of it not working for some people) and updated Ghast’s portrait.

So… What was the previous rom the story kept talking about
An fe7 pme?

Among Eggman’s playlist is one for an FE7 PME, so it’s most likely that. Playing that isn’t a requirement though, you can get by this hack with only knowing that the previous PME exists.