Finally got around to finishing up incorporating new updates to the skill system and reorganizing the free space in my base rom. I have less than a MB left for any additional changes I may want from what is left. The pressure in some respects is real, but with only a few chapters left and supports, I think I should be fine.

Anyway, here is a sneak peak of the updates I made and was able to incorporate: 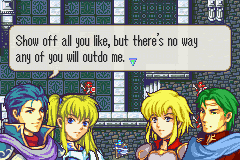 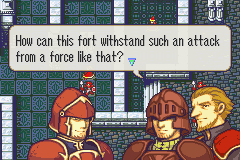 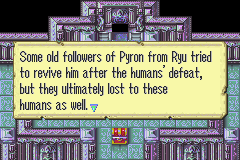 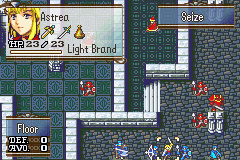 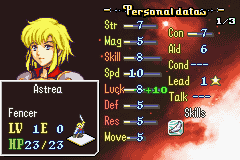 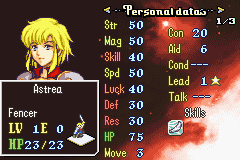 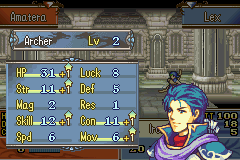 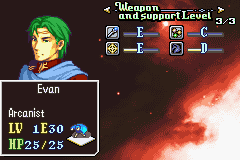 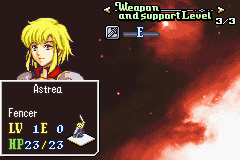 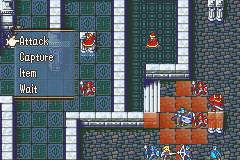 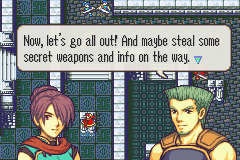 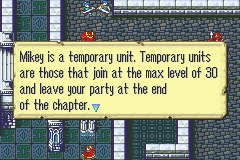 As you can see, the str/magic split has now been applied, in addition to there now being a movement growth as well. I thought about possibly adding in movement stars as well, but I ultimately decided against that addition given that there are two dancers available in the hack.

I also added in capture. I will try my best to balance it, but my goal with adding in capture is that it’s existence doesn’t make people feel like they will always need to capture something.

The last changes I want to note are some slight touch ups. The larger brown boxes of text I hope speed up the flow of the introduction scenes before some of the chapters. The weapon display was reverted back to a more proper one that actually displays weapon progress. I updated the minimug screen. While I don’t show it here, I did fix the odd animation issue with the flux tome. I also completely redesigned the prologue. Because of the new changes to how the hack is structured thanks to the str/magic split, people will no longer be able to use their old save files. As such, I’m trying to make some chapters play differently to make the experience more fresh for the people who have been playing the hack so many times over the years. This is the third time I’ve said this, but I really hope this is the last time such a change will happen, especially since the only other release I plan to do is for the final version of the hack.

The small updates to the early chapters I have planned don’t make me think I will fail to reach my goal of releasing the hack in full next year, but I’m not sure if I’ll be able to accomplish that goal by February anymore because of these updates. I can only say that this hack should definitely be finished next year.

The last thing I will end this long post/update with is that I am currently debating requesting some assistance with some small graphical changes. These wouldn’t be necessary for the final release, but there are some mugs I think could use updating and there is one battle animation I’d like some help with. We’ll see if I put in that request.

Oh, and I also made Mikey playable in the prologue only due to his popularity as thanks for the feedback given so far.

Enjoy and happy holidays everyone!

OMG HE ACTUALLY MADE MIKEY PLAYABLE
THE LEGEND

EDIT: Playtesting applications are closed as the necessary applicant amount has been reached.

Play testing is going well. Thanks to all the cool new stuff everyone in the community has created, I added in one new feature and one extra QOL feature thanks to their efforts: 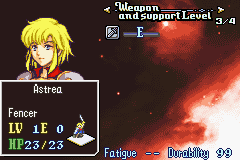 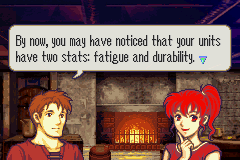 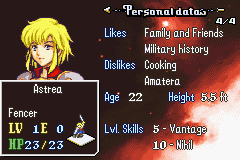 As you can see, fatigue has been added. Unlike in FE5 though, you get fatigued when your fatigue goes over your durability. I also added in the personal data patch. I added on to it a bit so that you can see what skills a unit will learn at higher levels.

nice to see people using and adding onto my asm ;-; 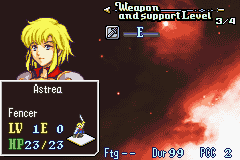 I managed to add in pursuit critical. From the testing I’ve done so far, it seems to work. I don’t believe it functions exactly as it did in FE5 as the formula is instead (crit*PCC) - Luk, but I can’t really tell. I tested that it works with brave weapons, against units that don’t counter attack, with Aether, Adept, astra, desperation, and assassinate as expected, so I hope it’s a fun feature to have.

Maybe I’ll remake FE5 when this is finished…

OK … I haven’t found any hidden item in chapter 15.
It is clearly impossible to find them and complete the speedy clear (this one I did). AND, “thief characters” don’t seem to have 100% chance to find them. Unless I messed up on your coordinates . I did an excel sheet, PLEASE can you have a look it and tell me if it is completely wrong?.

I will not be able to fully delve into this issue until later (I have yet to re balance chapter 15, but I will note your critique on the time constraint and attempt to address when I get to it. I plan a big overhaul for this chapter) but the only thing I can say at this time until I have access to double check that those are to proper coordinates is as follows:

I believe I should be able to expand the characters able to pick up items in the desert with a 100% chance. Thank you for this important feedback, I greatly appreciate it!

Do you plan to release the source for this?

At this point, you might as well remake FE5 with how much of it you’re adding to the hack. With how well these ideas are implemented, I believe you can do a great job.

When SGW is finished, I was going to release the whole engine source code for the hack. As far as releasing the source for the pursuit critical goes, the only issues I have with doing so is that I was only able to figure out how to implement it by destroying the barricade and barricade plus skills, it isn’t super well documented, it makes use of bytes in the character table that other people may be using for something else, and it wouldn’t be the most easy thing to modify as a result. It’s kinda messy since I slapped it together focusing more on speed of solving the problem rather than efficiency in some respects. But at minimum, it works I guess.

If you’d like it for your hack, I’d be happy to share it with you privately (please PM me), but that’s something I’d only be willing to do at this time for people who are “power users” in the community (i.e. you had a hack at FEE3 last year or I know you from what else you’ve done in the community) because I don’t want to be asked tons of questions on how it works at this time when it’s not in a public friendly form or a form that could be merged to the skill system.

Thanks a lot for giving us that information :). it’s way clearer than just the coordinates.

I decided to add in two more chapters so the chapter flow of the game is Prologue, chapters 1-25, and then final. The two new chapters I’m adding are pretty small and short in some respects. This is one of the new chapters. It’s now the first chapter of part 3, the new chapter 15: 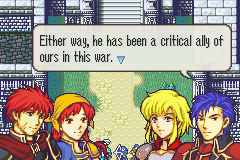 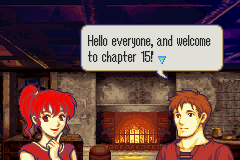 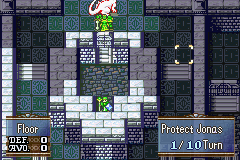 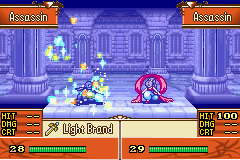 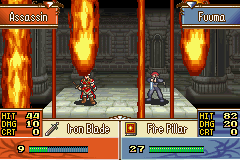 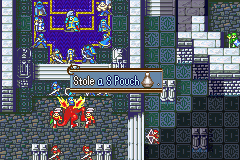 Until the next update!

After months of adding in newly released features in the community, adding in the recent release of the February 2020 skill system, and rebalancing for capture, I am finally caught up to where I was before I started the whole refactoring process, meaning that of the 27 planned chapters, 23 are done. There are only four more chapters to go before the hack is finished, two of which I am hoping can be done quickly as one is small and the other is the final chapter. Once all the chapters are finished, I’ll recruit for a final round of playtesting, work on the supports and endings while that is going on, and hopefully release this hack within the year.

The end game is finally so close and it feels so good!

Also, thank you to the now 400 people who have tried out this hack. It means a lot! I’m sure the number was already breached if Serenes is factored in, but it’s great to have official confirmation regardless!

I guess I had less story in mind for chapter 23 than I thought. At this pace, I may finish the bulk of the hack this month. 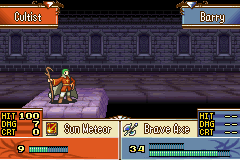 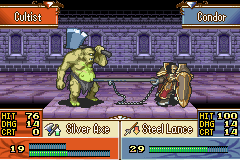 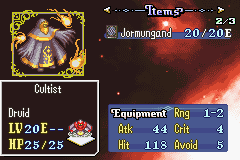 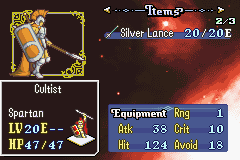 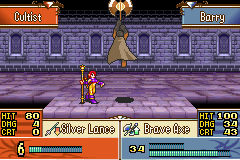 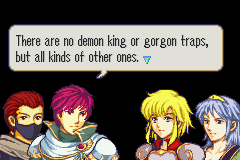 For the last four chapters, because of stuff I don’t want to spoiler, there isn’t much I can think to show off. All I’ll say is that chapter 23 is very familiar to people who’ve played a certain FE game. 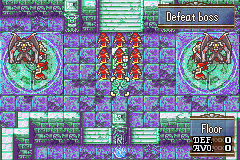 As mentioned before, not much to show off for the last three chapters because of spoilers. 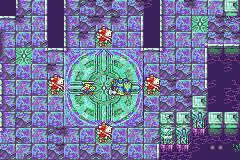 Great job
Will play after fin (to avoid… losing game progress again)
Looks like the enemies weirdly cuddle in a square?

Congrats on almost finishing the project! Best of luck finishing it!

But the question on everybody’s mind is “will Mikey return as the Athos?”

Looks like the enemies weirdly cuddle in a square?

The second to last chapter is essentially a small break chapter before the final. It allows you to get some easy exp and rests all your other units so that you don’t have to worry about fatigue for the final chapter.

But the question on everybody’s mind is “will Mikey return as the Athos?”

That actually gives me a workable idea. Though I think I’ll save that idea for NG+ if that’s possible. Otherwise just hardmode.

Although I only have one more chapter to create events for, the following things will still need to be finished before the final release is ready:

As I mentioned elsewhere, what I’ll likely do is recruit some more play testers to help comb over the first full build of events, and while they send me feedback, I’ll work on the supports and endings.