Welcome to the FE8 Chaos Randomizer!
(This is FE8 only for now, and for the forseeable future will not be for FE6/7. Please don’t ask, you have no idea how tedious this has been XP) 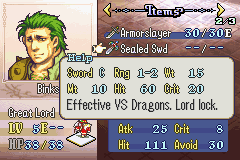 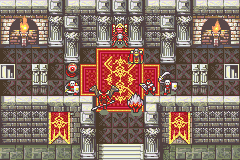 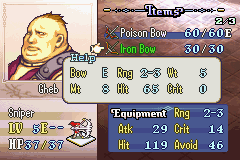 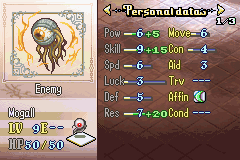 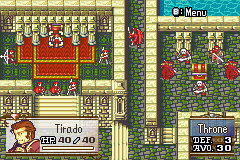 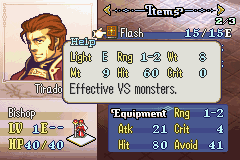 I’m not going to bother you guys with the introductions. We all know each other, except for those who don’t! And if you don’t, I’m Klokinator, the guy who has been in the FE community for longer than just about everyone yet has only ever contributed a silly reskin hack or two! (I also donated to help Yeti release FEXNA, but that’s not exactly a contribution)

HOWEVER! That all changes now! Having taken the source code for OtakuReborn’s randomizer on Reddit/Serenes, I have begun work on the most exhaustive possible randomizer that I possibly can! 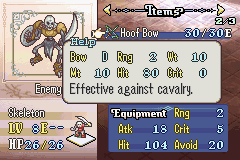 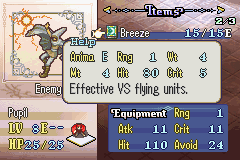 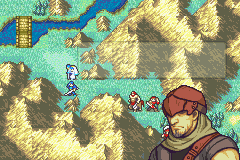 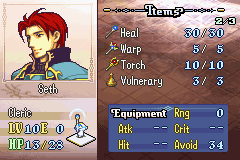 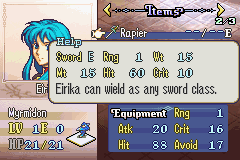 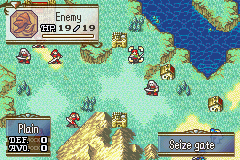 What his randomizer did before:

This is good stuff, however, in my mind, I could take this further. I wasn’t, and still am not much of a coder, but I could maybe screw with the source code and figure some stuff out. And I did! It was actually fairly easy, IMO just about anyone could do what I’ve done… but it was also super tedious as hell. Still, the results have been worth it! Let’s go over new features specific to the randomizer itself. 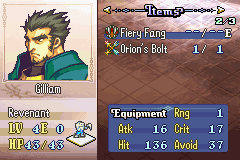 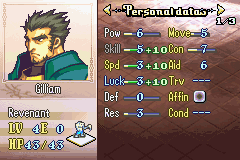 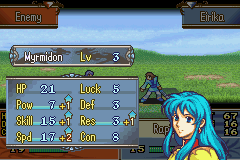 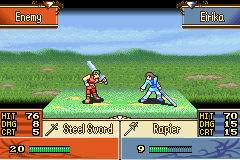 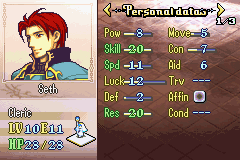 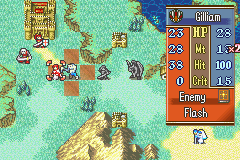 …Alright, that was underwhelming. The thing is, there’s only so much I could do within the Randomizer itself. Not because it’s impossible to do, but because I’m a terrible coder. However, with OtakuReborn’s help, I received some code snippets that allowed me to add one other super cool thing; Randomized enemies!

Yes, now enemies have randomized inventories, stats, and growths! Boss classes can change, as can a variety of other things involving them! The catch is, this is still using the player randomization algorithm. As such, the enemies can only randomize within a ‘character slot’. I altered a base rom, however, to create a desirable working method of randomizing enemies.

Something occurred to me though… people may remember FE7 Chaos Mode, a project I created a couple years ago, that featured all kinds of crazy new things that involved just changing how Fire Emblem works by refocusing the focus of weapons and classes and units in general. I thought to myself “Well heck, if I’m going to have to edit the ROM to get randomized enemies working, why not take it a step further? Or three steps?!”

So I did. Now, there’s a lot more than just enemy randomization that will be in the final version of this release. 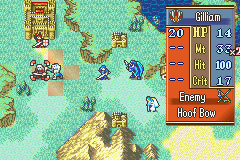 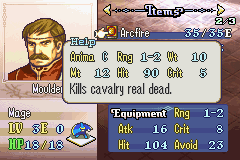 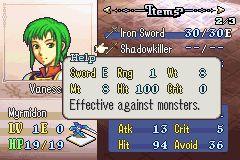 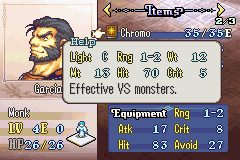 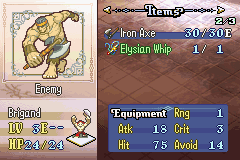 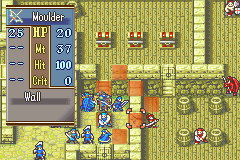 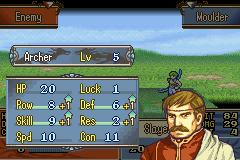 -INCOMPLETE: New classes, including a massive number of animations and map sprites created by the fan community!
-INCOMPLETE: Third tier promotions! (Many, many more than FE7CM)
-INCOMPLETE: Reclassing?!?!
-Completely altered weapon system. This is not something like “Weapons are slightly stronger and have more durability” or other minor tweaks. Every weapon is totally different from what people are likely used to. Based on very extensive playtesting, this has massively altered the early, middle, and late game battles.
-INCOMPLETE: New classes will (may, depending on dem asm coders) have new skills, and ideally I’d like to implement an actual skill system, but this is not set in stone.
-New weapon mechanics! As an example, the Devil effect has/will have a few new variations and forms, and there are/will be a couple new Devil weapons.
-Heavily altered enemy stats. We all know FE8 is the easiest FE, but now it will be difficult in a novel new way. Note that like Markyjoe, I’m not a fan of ‘luck based’ difficulty, and I’m not a fan of just pumping stats upwards to make battles longer or more tedious. If you want to understand how the combat will change, play FE7 Chaos Mode. It’ll give you a good idea of what to expect.
-New weapons! No longer content with 6 anima tomes, there are now TWENTY! Fire, Wind, and Thunder have their own branches, while light has a branch for general purpose utility and one for monster slaying, and dark also has an additional branch of tomes! There are also new ‘Great’ weapons, like the Iron Greatbow!
-FE5 Critical system! (Pow x2 plus weapon might (And relevant slayer bonuses) minus enemy defense, instead of [Displayed damage times three]). This was a controversial addition, but I’ve found it helps weak units punch through general shields and whatnot.
-Stat growth color system! This has been in my fix patch for years, but it’s here as well!
-SO much more!

I literally can’t remember all the community fixes and tweaks I’ve applied. I never kept a changelog, because I’m stupid and also dumb, but I’ll add anything else I remember here in the future.

This project is well underway and while currently stable, only goes to about chapter 12 in FE8. It’s lacking a lot of things that I want to add, but I will eventually get around to them in between writing my book and doing literally nothing else with my life

No release as of the moment, but if someone wants to help me with adding literally a few snippets of code to the randomizer, please let me know. The randomizer is, I believe, written in C#, or possibly Visual Basic. I know so little about code I can’t even tell what language it is, but I’d place money on VisualBasic.

I probably need a few other things, but those are the most pressing issues. Aside from that, a Version 0.5 release will be coming along… eventually! For now, here are a few patches to play a few hacks generated by this randomizer! Have fun!

I hope you guys enjoy! This will be released eventually, but I can’t promise any dates at the current moment.

Note: If you play through and notice broken things, DON’T report anything. I’m already aware of the fact these patches have a lot of issues. For example, spiders seem to break the game when they attack. I’ll fix the majority of it in due time and take fixes at that time.

This is a new patch for any FE8 Rom, I titled it “FE8 Dual Eyes” and you’ll see why if you play it.

I found it to be very fun!

(also, basically all of the expanded weapons have major issues with animation data that breaks the game. If you keep having an enemy glitch the game when he attacks, snipe him at range to solve the issue)

Can’t wait for this Klok, please deliver this ASAP

It wont let me download the game, says its malicious software

i know that but my computer wont let me download it :_(

Hey Klok, good to see that you have some time to get back into some FE stuff.

Had a question for you about the Chaos Randomizer. I was wondering if you were planning on making any changes/additions to monster classes? Since you’re adding third tier promotions, I was just worried that the monster classes may not be as viable, seeing as they lack skills ans such. Or maybe you’re making some monster classes such as the Draco Zombie 3rd tier?

Anyway, I was interested to hear your thoughts if you had the time.

Oh, I didn’t mean “hey you, add this stuff!”, more along the lines of just wondering what you had in mind concerning that stuff. I know you put in a lot of work in this sort of thing, my bad.

That being said, holy shit. It took me like 20 min to read everything in that chart. If you’re adding all of that then that’s amazing and far beyond anything I’d dared hoped. Greatly looking forward to it.

How long have you been working on this?

Long time. I’m strongly debating moving to fexna though, since this rom seems to have issues that I can’t easily fix.

I’m surprised you didn’t do that at the beginning, as it would allow for more versatility and I imagine that you have access to it. Perhaps there are downsides to doing it in fexna?

Granted that you’ve been thinking of this since at least 2014 when you mentioned it in your post for Fe7 chaos mode, and I can’t remember if fexna development goes back that many years.

Also, one downside from learning about this project is that now I check this topic every day, usually mutliple times haha.

What kind of issues?

A lot of issues. Romhacking in general is very prone to bugs out the ass, and most are fixable, but some are just so tedious to track down. As an example, animations randomly blow up the game one time, and not in another with new added weapons and stuff. You can see it in the demo patches where spiders often make the rom scream and beg for mercy if you attack, but occasionally they don’t.

FEXNA is nice because there’s 5 different ways to figure out bugs.

Well while I know it’s not easy, I hope you keep at working at Fe 8 chaos( fexna or fexnot whatever you think will work best) this is my fav installment of the game ,Ross ftw.

ps that class chart made me want the rom back more. P.ps will there still be a map to move around on?(as in between chapters)

Edit: btw feel free to hit me up if you need a play tester

Now that the project might be moving to FEXNA (or maybe it already has), would the different capabilities compared to ROM hacking change any of the goals for the project? For example I’ve always heard randomizing palettes is a pain in FE8, but maybe it’s different in FEXNA, or perhaps unfortunately randomization isn’t easily achieved in FEXNA so instead you’d have to switch to set class changes?

I don’t really know the capabilities of doing this project either way (rom hacking or fexna), so those are just random examples.

You’ve actually got it wrong.

FE8 has a whole game built around it which is great, but the randomizing aspect is tedious and annoying.

FEXNA is easy to randomize with and not tedious at all to work with, but I need to build a game around it all.

Both are equally awful in their own ways, but also equally good in others. The new skill system for FE8 is really tearing me apart, since it now means I can balance the skills properly, meaning hacking is now on equal terms with FEXNA in yet another regard.

That’s surprising, I didn’t know randomization was a feature or at least something feasible in fexna. It also seems that fe8 rom hacking is farther along than I thought.

Sounds like you’re stuck between a rock and a hard place, but cake is on the other side of both. Interesting predicament.