Nino buffs: 100% on everything is busted, no exception. The only units that get growths like these in these games are manaketes, that should say a lot.

Crit boost: Not much to say, I just don’t get it

Assassin Buff: Jaffar doesn’t need a buff, BBD is already a nightmare, not much to say, also Athos exists.

Personal weapon changes: I didn’t check out the weapons, I was going to later.

B rank staves: I get bias but like, your making this project for people besides you right?

Paladins: I don’t know how thats going to work but alright

Lyn/Elis weapons: I get these changes, they arent bad, I do like them dude mainly with Sol Katti.

Paladins: This is how it works. 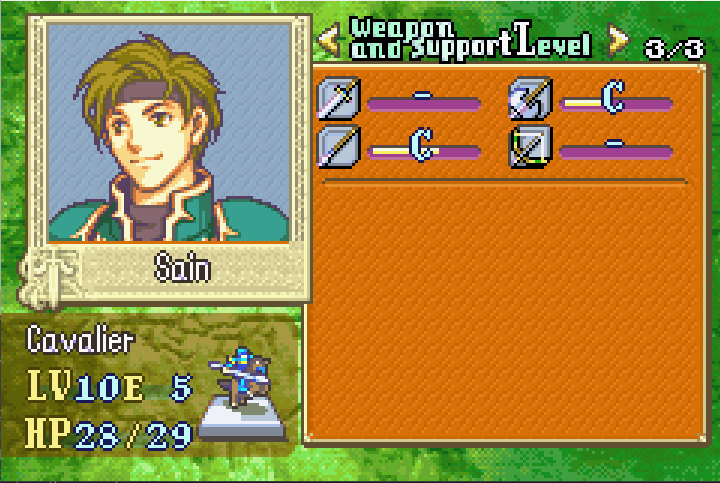 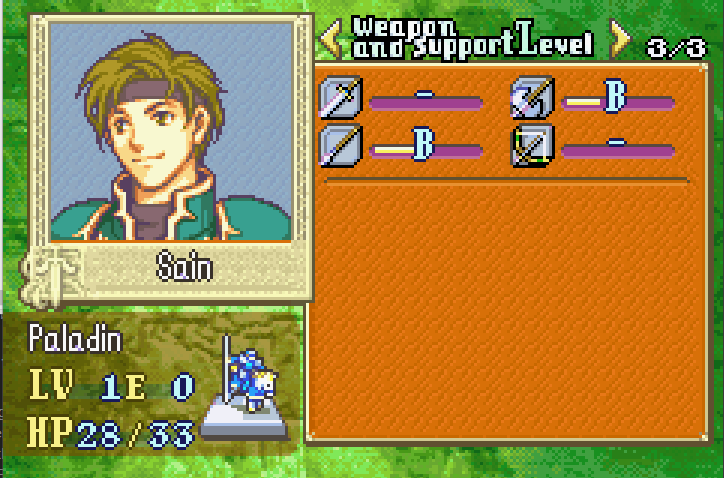 100% on everything would be busted, but I’ve increased enemy stats by a lot to the point where you’re going to have to deal with fe6 hit rates for a while with Nino. I actually also plan on changing her AI and stats so she doesn’t immediately get nuked by Ursula because her AI makes her go drink an elixir in bolting range.

Jaffar definitely needed a buff. You might disagree, but the fact that he still doesn’t have 1-2 range meaning that at his core, he’s a guy that kills one enemy a turn doesn’t make him broken except for in very casual play. Athos existing doesn’t really mean anything when between Jaffar and Athos you have Cog of Destiny, Victory or Death, Night of Farewells, Sands of Time, The Berserker and The Value of Life (which is going to have shitloads of enemies with at least 20 speed each.) Giving you one nuke per player phase for one enemy is just my way of making sure that anyone who GETS to BBD is going to win the game.

B rank staves actually isn’t too much of a buff. Even in base game fe7 with its E rank staves on promotion for sages and druids and only C rank for bishops, any one of these units can get to A rank very quick because of the defend chapters and all of the really high WEXP staves. This is very mild favoritism, and I’ve already decided on nerfing Lucius’s speed a bit so it’s just a way for him to differentiate himself from the other mages after promotion (because bishop class caps are super bad compared to sage or druid class caps).

Crit Boost: In fe7, player phase is not as valuable as enemy phase, and all of the classes which recieved crit boosts were footlocked classes that were all (except for berserker) either 1 range or 2 range locked. This makes units like Guy very valuable for boss kill candidacy and not trash like in base fe7.

That mention of hitrates and enemy speed scares me, jaffar not having 1-2 doesn’t mean he needs a amazing buff, overall this just sounds like a nightmare to play through. I’m sorry I tried to be nice but this seriously does sound like a nightmare.

I agree with “Legendary weapons breaking seems like the dumbest thing in the world.” I mean bruh, people used this thing before why cant I use it without breaking.

Put your faith in me. If it’s garbage, I’ll make it less garbage. I’m more dedicated to this being a balanced experience. I can let go of the Jaffar buffs if I go and play and find out Jaffar is actually stupid. I’ve been busy this weekend, but I’m going to get back to playtesting soon and I’ll change the stats of the players accordingly.

I looked into this topic a few times and find it interessting to say the least. I gotta ask tho, what do you mean with the exp-gain change in the last reply?

So, if you didn’t know, in fe7 at least, EXP has a specific number used in calculation that is tied to each class, known as the relative power. This relative power is an inverse to the amount of EXP you gain, so the lower the relative power, the more EXP you’d gain. Previously, I’d drastically lowered the relative power of all classes, but this resulted in so much EXP gain that Lyn Mode units would just outclass everyone. As a result, I’ve decided to rollback the EXP gain. My ultimate goal is to figure out how the fuck I can make HHM exp gain equal HNM exp gain.

Why would you want that tho? Normalmode exp gain makes higher leveled units gain more, so character will just snowball into oblivion. More exp is good, but that would break the game even more than fix it.

I’m gonna defend the Nino buffs on account of them still not being enough to make Nino anywhere close to a good unit. The reason she was, and still will be, bad is because of her abysmal bases and late join time. This doesn’t break her even a little, it just makes training her feel at least a little worthwhile instead of being complete garbage for a longer period of time.

The buffs that I think need to be addressed are the ones to staff uses. 20 base xp is absolutely ridiculous. Serra would only need 45 uses of heal to have access to a big boost on promotion, and Priscilla would only need 35 uses. To put this in perspective, the base xp for getting a kill on an enemy unit is 30, and this doesn’t even require whoever is being healed to have killed the enemy for nearly as large of a bonus. Since you get your first guiding ring(s) in chapter 18, you’d be able to promote them both extremely early on, which is frankly a bit absurd. Granted, I’m not sure if there are diminishing returns on heal uses as you level (I tried to find the exp formula on serenes but wasn’t able to), but especially if the base 20 stays on promotion I think you’d be capping out these healers way too quickly.

The amount you heal does get much less on promotion. Also, before promotion, combat units WILL be getting more exp than staff units

Alright, so I’ve now actually gone and played this thing through chapter 17x, here’s my thoughts so far:

This is just laughably easy. Base stats are inflated out the wazoo, and some changes to base weapon ranks and levels make little to no sense either. You mentioned that your intention was to play Lyn mode before Hector mode, so that’s what I did. In only 38 battles, Lyn made it to level 17 by its end. This isn’t even with favoritism either, Kent and Florina fought 37 and 35, respectively, and Sain fought in 48. All of their levels were in the 8-10 range (Sain hit level 10 exactly before I used the Knight’s Crest). I know you wanted to buff exp gain on nonmounted units, but this is just going to cause people to cap out way too fast.

Speaking of capping things out way too fast, you seem to have an obsession with giving level 1 units 15 or more speed at base. What is the point of this? I know it’s favoritism, but you need to be reasonable here. Guy, Lucius, and Raven come to mind immediately here. None of their stats look like a level 1 unit, yet supposedly they are. Speaking of favoritism, it also looks like you increased mercenaries’ speed cap before promotion. This would have been a decent way to compensate for the inflated bases, but enemies are still so weak it just makes it overkill. There are practiacally no meaningful decisions the player can make regarding what units to use because they’re just all so strong. It’s not so much a balanced experience as it is a universally broken one.

Another change that really stuck out to me was Marcus being given B lances at base rather than A lances, meaning he could not use the silver lance. I’m guessing your intention here was to make it so that you’d trade it to Oswin, since he starts with a lances, and nerf Marcus, but in reality all this really did was make me want to grind Marcus’ lance rank up early with essentially no drawback because everybody else gains experience so ridiculously fast. Base weapon ranks in general seem a bit strange, I like what you’re doing on promotion giving D/C in new types rather than E rank, but it seems like nearly every character starts with B or A rank weapons at base, with a few exceptions. It’s really strange.

Now I’ve been bashing this hack quite a bit now, but there are a few things I think you’ve done right, or at least had some good ideas with. First one being 3x weapon effectiveness, this should have been a thing in the base game (and even was in JP) so I’m glad it’s here. Another thing I think you had a good idea with is lessening terrain penalties for Mercenaries and Myrmidons. I think this is a much, much better way to go about buffing the swordlocked/footlocked units than making their stats bigger. Their player phase is already good, and changing their stats won’t really change what makes them bad. Changing this though gives them a distinct advantage over other units and makes them feel more unique in some way. I think unbreakable iron weapons are a nice quality of life thing, but you should definitely change some of the house rewards from gold to something else to compensate, since right now we just get way too much money and have less things to spend it on.

Some bugs I’ve noticed: Ballistae just don’t work entirely, Wallace does not have canto, Lyn doesn’t join with a gem (though this doesn’t matter much because of the gold surplus and if intentional should stay gone), and several units base stats do not match what you have up on the changelog, but it’s too tedious to check them all.

I think the big takeaway here is that you either need to buff the hell out of enemies and increase stat caps pretty much across the board, or you need to nerf the hell out of player units, especially base stats and/or base levels, and definitely experience gain for foot units is crazy high. Like I mentioned before, since every unit is so strong there are minimal differences between who you use, and this does not make for a very engaging experience.

You know what, I came into this expecting problems. Thank you so much for telling me all of these things. I really appreciate this. I’m going to get to work fixing this. A few things I want to ease your mind about:

That all sounds great! I’ll try it again and let you know my thoughts, but it’s good to hear you’re open minded about some of the balance changes! I didn’t think about the HM bonuses, but that does make sense.

Actually, I apparently lied. I checked the stats, and what happened was that I changed class base stats to make enemies more threatening, and as a result, for example, when I jacked up the Monk class’s speed base by a lot, it also jacked up Lucius’s speed to 15, when it was supposed to have a base of around 8. This happened to a lot of units, and it should be fixed now.

That explains a lot of the oddities for sure. I’m working through 1.3 now and it does seem much better on that front so far, I’ll post more once I get farther in.

How have you guys been enjoying the hack so far? I’ve put a lot of work into it and I hope the worked paid off.