link to the patch (apply to an untranslated FE6 rom. Hard mode is unlocked from the start): Dropbox - FE6_BugFixEdition - Simplify your life

The goal of FE6 Bugfix edition is to let you play the game the way it was intended to be played. I tried to find a bunch of examples where there was pretty strong evidence that the devs had intended for something to work differently than it does, and then change them to give the intended behavior.

Here’s a list of all the bugs I fixed:

I know that this is not all of the bugs in FE6. There are some weird bugs with arena where you can end up fighting a brigand with a bow or a warrior with fire, but I couldn’t find any documentation on what causes that to occur, let alone how to fix it. There are also some bugs related to rankings (in particular the funds ranking is unusually easy if you get the best end) that I probably could have fixed with a bit more effort, but I ran out of motivation, because I never play ranked and I didn’t want to figure out how the game end event works. If you know a way to fix these, or any other bugs I’ve missed, feel free to let me know and I may update this at some point.

In addition to the regular BugFixEdition, which includes all the changes listed above, I added two more patches in the folder, which fix some things that are pretty clearly not bugs, but are also pretty widely agreed to be bad.

The “BugFixPlus11AFixes” adds a few very small changes to address the dumbest parts of Ch11A. Echidna now starts with an iron sword equipped so she doesn’t die the same enemy phase that she spawns, and Klein/Thea no longer have a 20% chance to not move. I also removed the “20% chance to not move” AI from chapters 10B and 15 (where it was applied to Garrett and his brigands), and I went ahead and removed the weird Galle AI from chapter 21. Since Klein/Thea/Galle got custom AIs, it seems pretty clear that they weren’t intended to just charge. But IMO the game plays better when they just have charge AI.

The “BugFixReduxVers” goes even farther (although it still has a very light touch as far as reduxes go). In particular, it makes the following 3 changes:

I’m not expecting that this will become anyone’s definitive version of FE6, but I figured it would probably be of interest to some people besides me. If you don’t like the gameplay of base FE6, this is probably not going to fix it for you. Play something like the Numbers Patch of Project Ember.

Credits:
muhmuhten for writing a bunch of asm for me.
Terraspark (and Gryz’s posts) for helping me understand status staff AI
7743 for FEBuilder
Gringe for the English translation patch
Folks in Mekkah’s Keep and the r/FE discord for helping me compile a list of bugs

but did you address this maniac in 20Ax

Nope, the only changes are the ones listed above. Buff warriors seem to be an intended feature (and that guy is trapped in a box, so it’s not like he’s hard to deal with).

You know what, that’s fair. Being copy pasted from a tier 1 unit is a reasonable explanation. I just pushed a new version (of all three patches) which changes the four level 18 warriors in chapter 20xI to be level 7 (consistent with one of the other two warriors). I also changed the level 15 warrior in chapter in chapter 12 to be level 7 (slightly higher than the starting warrior, since his accompanying fighters are also higher level) with the same reasoning. And I changed the target AI of one shaman in Ch20xS from “archers” to “prioritize damage (standard)”, because I meant to do that before and forgot (he’s the only unit in the game to have archer AI without a flier-effective weapon, and given the number of bow units in Sacae, it’s pretty easy to see how he could get it by mistake).

I’ve actually always disliked Hard mode bonuses, they make already good units amazing, and kept the others down. I might actually give this patch a try on my next playthrough. Good work!

If you don’t mind, could you make an additonal patch which has all the changes from the basic patch, but keeps enemies as they are? They certainly are bugs, but i don’t like the game being easier.

This is a pretty nifty version to have. l’m a bit stubborn and like to play games as close to vanilla as possible, but l do like bug fixes when l can get something minimally intrusive.

By the by, do you have a bit more information on some of these fixes? Particularly the RNG for “HMB” and Status staff AI. Those sound good for my own FE6 stuff.

Sorry for a long delay in responses here. Life got busy. I have just updated all three patches to include a few new minor bugfixes from muhmuhten which address two issues with the targeting AI’s bonus for being near allied units.

Does the Strong enemies patch have the same additional changes as the Redux version? I am personally not a big fan of those either, so if it does, and you wouldn’t mind, i would appreciate it without those changes.
That being said thanks for doing the strong enemies patch for me!

The strong enemies just includes the changes from the basic version of the patch, not the redux version.

The silence staff AI has been changed to target units with usable tomes or staves, instead of only those with usable staves. Credit to Terraspark for his staff AI notes which helped me fix this. 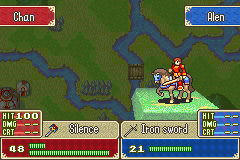 I don’t know if this hack is still supported, but I…er, think you accidentially enabled the enemy to target any usable weapon, instead of just magic. This effectively just makes it a copy of the Berserk/sleep-AI Judgement(Since that can also already target units with only usable staves too). I noticed this when my rom inherited that issue due to me copying over the relevant hex-changes from this one.

Edit: Actually, thinking about this some time later, the staff seemed to always target the same unit as pre-fix berserk/sleep, so maybe me calling it effectively a copy has another layer. Is it possible that silence has the same targeting-issue? Sounds believable, since no one would have noticed it with nobody fielding an army of staff-users.

Oh dear, that’s a rather serious bug. Thanks for pointing it out! I had encountered and fixed this problem before, but it looks like I somehow ended up including an old and buggy version of the silence fix in the patch. All versions of the patch have been updated with new code for silence that should make it actually work as described in the OP (hopefully).