Very minor thing but can Leif, Arthur and Febail have a boss conversation with the final boss based on their battle convos with him in Fe4 Chp 7 and 8? It’s also because Tine has her battle convos from Fe4 in this hack too.

That conversations are currently not existed. This is because it is unnatural for people who are clearly adversaries to only talk and end the action. Tinney can talk because she has a good relationship with Blume and Ishtar, but the conversations make her angry.

As you know, there is no system of conversation before battle in FE5. I would like to create conversations if I can implement that system in the future. I have tried it in the past but did not work. 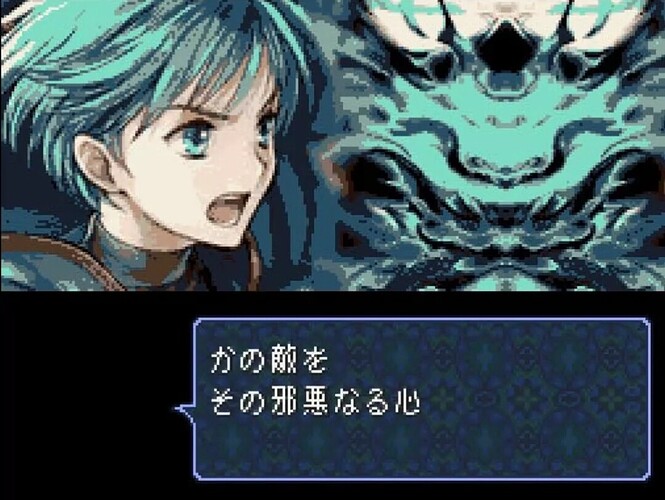 That’s fair. An idea would be that if they wait within his range, it will trigger a dialogue sequence similar to the one in Chapter 1 with Eliu if you have a unit arrive halfway through Fianna. It would at least make more sense than having the unit straight up talk to him like with Tine.

They do not publish technical information, so I do not know much about how it is accomplished. I’ve only heard bits and pieces that they define a special magic to call up backgrounds like Hel in fixed combat events.

An idea would be that if they wait within his range, it will trigger a dialogue sequence similar to the one in Chapter 1 with Eliu if you have a unit arrive halfway through Fianna.

This method has some problems, such as when sending them with a warp staff, which can lead to strange things. In Chapter 1, it can be done in exceptional cases because there are only a few patterns of action that the player can take.

People complain about armors being slow but for me Dalsin always got at least 6 move (both Theory and vanilla game) by the chapter where you meet General Hannibal or I was lucky.

Dalsin is faster than dismounted Finn on Theory lmao, if i remember correctly. I don’t remember if AI did something about it.

There is no way to recruit him now. I plan to allow him to join as an alternative unit for someone else in the future.

I think that Homer could be recruited later by Shannam if the player choose his route. That would makes sense because Shannam is not recruitable in Route A, they know each other and Homer would be a alternative unit to Smirnoff (i never remember that Route A blonde priest’s name lmao, i always called him this way, maybe it is Schroff).

I was thinking about that too, Ishtore using the Loptyr Sword doesn’t makes much of a sense to me, either does it being able to evoke fucking Loptyr himself. It is too much overpowered in my opinion and doesn’t makes sense with the story (Julius only can use Loptyr’s powers because he is his vessel). Both Raydrik and the Loptyr Sword could be buffed, specially to resist even the most overpowered of the characters (Mareeta and her father for exemple), but buffed in a logic way.
Raydrik could be some kind of “sidekick” to Ishtore, a second-to-command in Freegian’s rule of Thracia, not being able to become the ruler of Manster because of he being very untrustworthy. The Twofold Traitor stuff would not be just a title, but it would be a problem to Raydrik, that would try to be a “Threefold” Traitor, by conspiring with the cult against Ishtore and Blume to reach the throne of Manster. The cult would use Raydrik’s powerhungry nature to hold Ishtore on check, to force him to follow their desires, implying that if he doesn’t cooperate, Raydrik would assume his position and kill him easily with the Loptyr Sword.
Raydrik’s existence would have a meaning on Judgral story at all lmao. The relation of Raydrik with the cult would be shown by his Loptyr Sword, while Ishtore would
just use some powerful Lightining weaponery.
The scene with Eyvel at the arena in Manster would even have a better reason to happen, to show Raydrik ties to the cult and how they plot against Ishtore and Blume behind their backs. In the end scene of this chapter, Ishtore would scold Raydrik for his actions, trying to enforce his position as the commander, but Veld would threat him back, saying that he is a replaceable tool for the cult, and that if he loses his role and his life to Loptyr Sword for such treason, his lover, his family and friends would be the next ones.
I think that Ishtore will need to leave the game in some moment (because he dies at Seliph’s hands in Melgen). Ishtore cannot be an almost final boss, like Raydrik was in vannila, because it would not make sense otherwise. The cult and Blume could force him to go to Melgen, putting Raydrik and, consequently, the cult, in control of Manster.
Raydrik would mantain a good part of his original role in FE5, lot of scenes would play almost the same, but the rest would be improved this way i believe, and he would still be a “secondary villian”.

This is tantamount to ordering me to remove most of the changes I put into the story. If I had the current hacking skills from the beginning, I might have modified to leave the original story and expand it. But I have no intention of modifying it back to the original now. The merit is too few for the enormous effort.

I know that it is hard to do, so if you ever accepted the idea and needed help to do it, i would like to help, even if just by doing the script for the dialogues (i have been doing it while i played lmao. I even sent some ideas i had for the story here). I don’t know how to program, but i would like to learn if it would help improving the game, i just need someone to teach me. I have no idea about anything, so i need some guidance lmao.

I liked the game a lot, and i want to have this experience to improve my programming, hacking and game developing skills (i want to create my own game someday, something close to FE4 and FE5).

As I noted at the top of this topic, suggestions for correcting grammatical errors are always welcome.

As for other additions, such as events that do not currently exist in this game, I cannot say without seeing the content, if it fits with the storyline and is feasible or not.

Updated. There are several fixes and improvements, and new features.

Videos of the new function:

(In the video, when the settings were changed after moving everyone, it did not automatically end the turn, but I have improved it will also end in that case.)

I believe Raydrik still can make a cameo appearance one or two when player is in Munster. For all he can make himself scarce and run/teleport away when player opens door to the throne room where Galdius and Ishtatore are in third to the last chapter. Since Raydrik governs Cantone he wouldn’t risk his skin for House Friege. In the chapter The Empire’s Counterattack he may also spawn along with some of his own troops and retreat/teleport away (make him invincible) when his HP drops to low single digits or something along this lines. Raydrik always stroke me as a ingenious and cunning villain but coward nevertheless. I am thinking of any vanilla cutscene that can be used to insert Raydrik… Since Raydrik works for House Friege when it benefits him. His original scenes in Fiana village and Gate of Kelbeth could be reverted? I dunno if it is possible to unbury it from technical point of hacking.

As I wrote before, in this hack Raydrick is in Conote all the time and never comes to Manster.

how to play this i really tried to apply the patch but i couldn’t and unfortunately i’m not good in english which made me more lost but it seems to be very good.

Thanks for your interest.

This hack is provided as an ips differential patch, for use with headered SNES ROM. Please apply to the ROM version FE5.smc file (with header), size: 4,194,816 bytes.

If you have a headerless ROM, consider using TUSH or web tool, or similar to add headers.

Note: ROM version refers to the ROM cassette version released in 2000. It has 2000 written in the year notation on the title screen.

And because of the ROM expansion, it will not work without an emulator that supports ExLoROM. I confirm that it works with Snes9X and bsnes.