Welp. Never in a million years did I think we’d see four FE games in development at once (five if you count the 3DS port of FE: Warriors). The FE2 remake (aka FE15) as a lead was undoubtedly a curve ball to everybody who tuned in. FE16 is in development for Nintendo Switch. Oh, and there’ll be a nice little mobile app that you’ll presumably play twice before hitting an inevitable paywall.

The Fire Emblem Direct was full of surprises; first and foremost, the notion that FE would be important enough to Nintendo for them to devote an entire presentation to it is completely crazy. For veterans who have lived through the series’ near-cancellation due to declining sales figures, the mere thought would have stunned us just five years ago. What an odd time it is, indeed. Once on the brink of cancellation, unexpected and unprecedented success has brought the Fire Emblem series to new heights.

A Gaiden remake? It’s a very exciting prospect, but be careful to temper expectations. Intelligent Systems does not exactly have the best track record in terms of remaking Fire Emblem games. Although, it would be quite nice to see them finally deliver on the promise of a substantive remake.

But as for the most important question that I’m sure is burning on everyone’s minds: Will there be an avatar? Some fans claim that evidence can be found in the reveal trailer that points to the possibility of one. There is a fourth civilian character whose name possibly translates to a pronunciation of “FE”, hinting that the character may in fact be a low-key iteration of the avatar character. Previously, the avatar character has been featured prominently on box art and in promotional material.

FE: Warriors will be interesting to keep an eye on. It’ll be substantially disappointing if they keep it restricted to Archanean, Ylissean, and Nolorean characters. Maybe we can hope for Alm and Celica in the base game? Oh well, there’s always DLC.

FE16 will be coming soon to Nintendo Switch. Haven’t seen any footage of it yet, so there’s not much to say. FE: Mobile will be milking parents’ wallets for all they’re worth sooner than that. At least the character art is pretty dope?

Discuss. Idk, I’m probably too cynical at this point.

who cares about all that

Animu waifus with shit games and shit stories beat out Metroid.
Just take that in for a second. 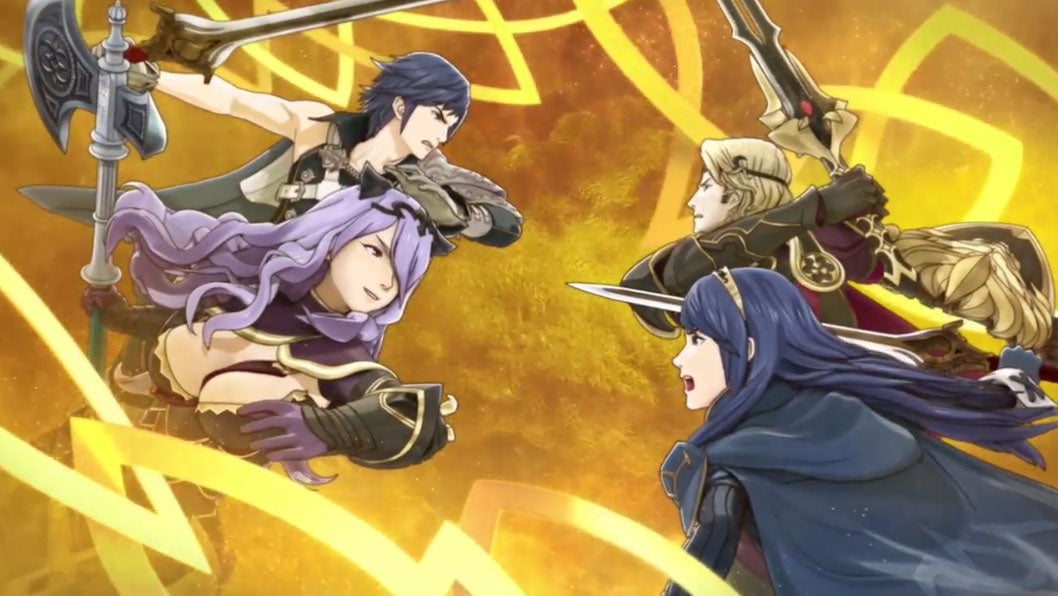 Nice to see they also made sure to put the tits right there in the centre so that you wouldn’t miss the main appeal of the series. As subtle as a brick.
But on a serious note, anyone else think this art looks dodge as fuck? It looks derp, which is astonishing considering it’s Nintendo branded. What’s with that dude’s arm on the right, just how in the fuck?
It makes me sad though, to see that the only characters here are from amongst the worst games in the series, is there still room on the lifeboat? I think I’m finally ready to abandon the franchise, it’s dead to me.

Like, did Rob Liefeld draw this? “I can’t draw hands, so let’s just make them small and obscured, hide that one behind an axe, yeah”. That’s why there’s no feet in FE, oh my god it all makes sense now.

I don’t think the new villager is an avatar. Like in FE11, they’ll add new characters, and a female villager would be a good addition for FE2.

Also, the title “Echoes” makes me think… why?
I think that Echoes will be a series of remakes, they have at least 8 FE to make a series of remakes. This is far fetched, but looking at the logo, “Echoes” is part of the “Fire Emblem” word, and “Shadows of Valentia” looks like a replaceable tittle for future entries.

But, maybe my lack of sleep is making me paranoid.

Also, the title “Echoes” makes me think… why?I think that Echoes will be a series of remakes, they have at least 8 FE to make a series of remakes. This is far fetched, but looking at the logo, “Echoes” is part of the “Fire Emblem” word, and “Shadows of Valentia” looks like a replaceable tittle for future entries.

I had the same thought, which would be cool if it means a commitment to more remakes. It would be great to see Tellius and Jugdral remakes in the nearish future.

You all can say “I told you so” later, but I’m optimistic for the series’ future. The mere fact that IS still gives a shit about pre-Awakening games is enough for me to stay interested. Taking a 20+ year-old game that the majority of the player base has never played nor likely even heard of and giving it a remake is pretty ballsy on their part. If anything, it shows that the series is financially stable enough for them to start taking risks again, which hopefully translates to less pandering and more substance in future titles.

Also, yeah, “Erinys”. Bookofholsety was right all along, the madman.

It would be totally worth it just to watch the new generation of fans react to the end of first gen FE4.

Also, yeah, “Erinys”. Bookofholsety was right all along, the madman.

Clearly, I burried the lead. Everyone pour a shot and toast to the triumph of @bookofholsety! You’re canon now, bruh!

Hypothetically, if Echoes does become a series of remakes… Does anyone wanna take bets on what the next IS remake will be? I put my money on FE6, just cuz of the Roy factor.

If Echoes is fully intending on being a remake series then this series has officially shit the bed.
When the only decent thing your license has to offer is the remaking of it’s old titles then you’re pretty much admitting that you’ve got nothing left.

This was the point Square brought up every time a dumb cunt asked for an FF7 remake, so they pushed out a 10 year old abortion and then decided to go cash in on nostalgia because they’ve lost their touch.

It says something that /r/fireemblem is hyped over this too.

I haven’t been this excited in a long ass time. As one who started with Awakening then went back to the older titles, having FOUR games to look foward to in the next two years is damn impressive, especially since I only ever tried the series to cure boredom I had on a “vacation” nearly 3 years ago now. I’m actually more excited no than I was at the Fates reveal, that’s actually an accomplisment, color me impressed.

Hyped for Echoes and Warriors
Cautiously optimistic about switchFE
Meh about the mobile game, but I’ll still play it

Well, I don’t want to think that IS will make the same mistakes of Square, but they’re following the same path.
Echoes probably will be a collection of remakes, maybe we will have our own FF7HD with the FF9 remake.
Heck, even the FEM is a ripoff of FF Brave Exvius. Is the same concept, you summon characters from previous entries, have battles like in the main series and even the same paywalls.
And if IS is following the Square path, we must be prepared for the rape of FE4 with a disastrous remake, like Square did with FF6.

But, it’s too soon to jump into conclusions, maybe IS is smarter than Square and they won’t make the same mistakes.
Only time will tell.

well the fe warriors stuff left me as excited as a dead fish, and the fe heroes stuff left me cautiously optimistic, the gaiden remake has me particularly giddy.

The most original game in the series in terms of mechanics is getting a remake upgrade, and one that actually looks pretty damn good. Plus if the game goes over well it presents the opportunity for fire emblem to utilize gaiden mechanics and structure more often would be far more likely. Plus it looks pretty damn good art design wise.

I’m looking forward to that FE2 remake
quick, we need to beat them to the punch and remake FE2 in FE8

It would be totally worth it just to watch the new generation of fans react to the end of first gen FE4.

Especially if their MU is there with them

I’m more excited for the switch FE
Don’t get me wrong I think Gaiden looks neat but I think I’ll stay cautious here.
FE heroes reminds me way too fucking much of that one mobile FF.
FE Warriors doesn’t excite me in the slightest. Not falling for the Toei shit again.

upboat for Erin and Lombard

Re: Echoes, I’m certain that the next one will be FE6. There’s too much money to be made on anyone who played Smash and wanted to play Roy’s game, and Nintendo can’t just sell the GBA game as new again, now can they?
FE: Herpes: Glad it isn’t just going to be Archanea and 3DS chars; will probs end up being a good way to introduce people to the series. Not fixing that typo. Android gets it first ahahaha!
FE Warriors: I like Dynasty Warriors, so I’m cautiously hyped. Hopefully it’ll have a story of FE continents fighting each other (much like the three kingdoms in ROTK/DW) rather than a generic good-vs-evil story where everyone bands together. If the teaser had shown a non A/3DS char, the hype would be far less cautious.