I’ve got 5 chapters done so far. It’s very much in early development, but I would like to know what people think if they have the time to review it.

Congrats on release! Recommend you share some screenshots and basic info about the game so people know what to patch and what you’ve made.

On the continent of Pescar, the tyrant Ambrose has begun a violent conquest of the world, Lucius, a young farmers son, speaks out and is condemned to die. Escaping by the skin of his teeth, he rushes to safety, recruiting unlikely allies along the way hoping to one day restore his countries honor and undo the wrongs that have been committed.

The story seems interesting. After killing Zorna, it hangs.

Thanks, I’ll look into it

Yeah, please do, will give you feedback after playing the entire 5 chapters.

I’ve updated it and fixed the issue. If anything else comes up, let me know.

Here’s a write-up of my thoughts during a run through the patch.

It’s not bad as early development goes, but you should absolutely put up some screenshots in the op so people can see what they’re getting into. I made an exception this time on a whim, but normally i wouldn’t even bother to download a patch that doesn’t have some screens showing it off. Basically, the more info you give people, the better, and the easier it is to attract those who would actually like to play your game!

I just played this too, I wasn’t particularly enthralled by the sales pitch but a cursory glance in builder showed that it didn’t have oversized maps or dumb enemy density out of the gate so that’s already a step ahead of a lot of other hacks, so I figured I might as well give it a shot. vilk has covered most of what I was going to say (for the first couple chapters at least) but I’ll leave some more.

There’s definitely a lot to iron out but since this is so early in development it won’t be a big deal to fix at least, good luck!

Thanks so much for taking the time to play and critique it. I will do my best to fix everything that you mentioned.

Thank you so much for playing! I’m grateful for the advice and suggestions and will do my best to change and add them.

No problem, and good luck with the hack! You’ve already made more progress than most people who try and make a video game.

I tried hard mode and somehow got an enemy on the first map stuck on heal mode for 3 turns, with no way of killing him fast.

Thanks, I am looking into it.

I haven’t taken hard mode into consideration so far, so I would recommend easy mode to start with. I’ll look at hard mode once I’ve finished debugging.

There’s a patch to disable certain difficulty modes in febuilder. Might make sense to do if you aren’t balancing other modes yet.

I tried making a more gbafe-esque palette for Lucius based on his portrait colours. 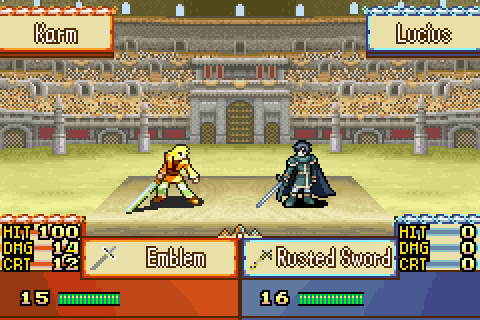 It uses the black from Marisa for the hair and inside of the cape and green from Joshua for the clothes. Feel free to use it if you want, or just modify or build on it if you like. 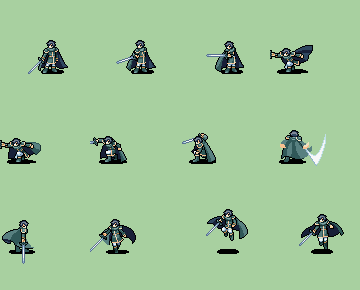 Thank you so much for this, but the Eliwood was pretty much a placeholder for what I was making.

This is the portrait I plan on using for him.

I figured you might want to replace Eliwood at some point, but i felt inspired :V

New portrait’s pretty good, he does look a lot more like a farmer’s son now!