I woke up today and was somewhat shocked to find out that ten people had DMed me screaming that AI Generated FE art was here. It was posted on 4chan and it looks pretty legit. In the middle of the massive leaks for Engage, an anon just started posting a bunch of images of AI generated portraits. 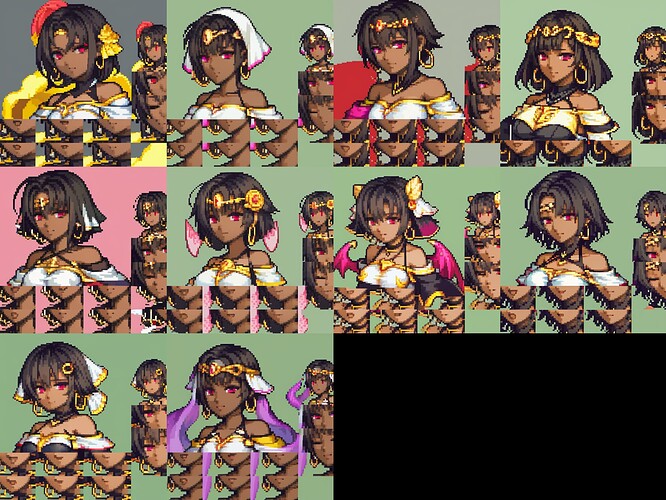 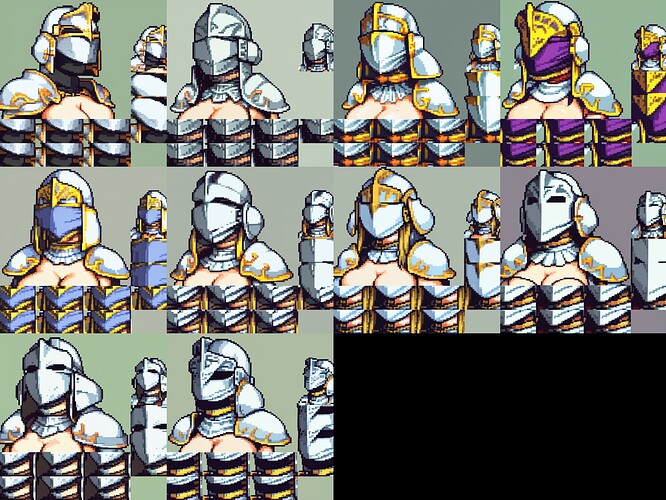 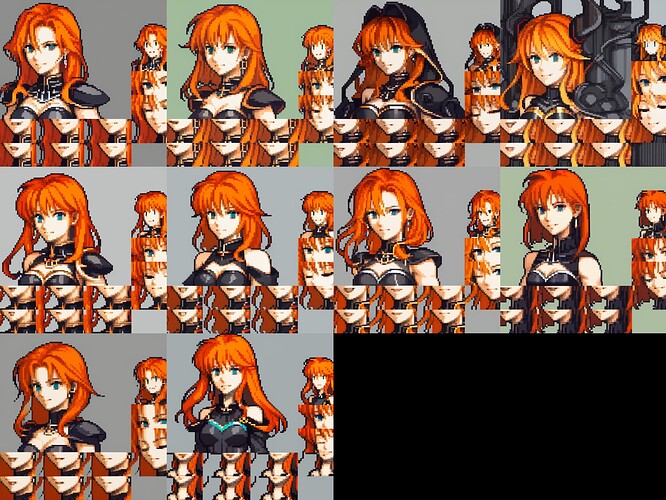 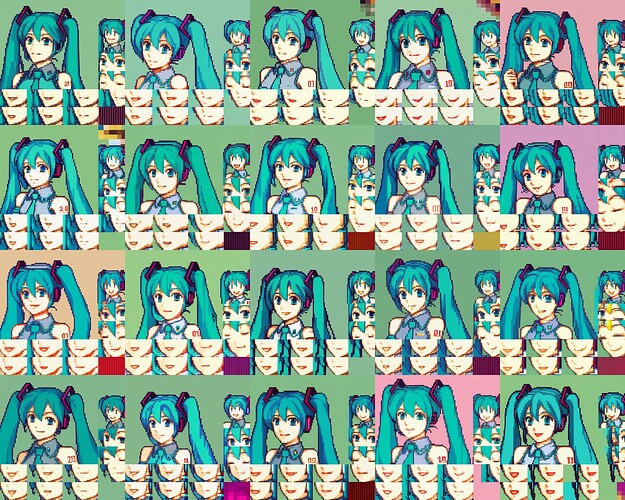 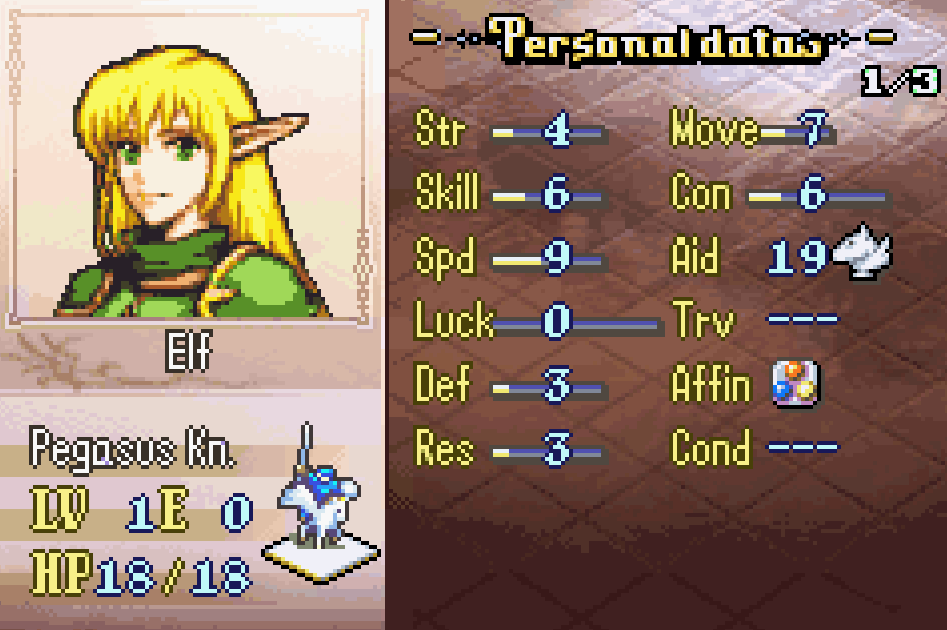 I’m very excited for this. It’ll be a great way to get all of the characters from every FE game finally made for the repo, which has been my goal with the CCC. The tech is not released for it yet, but I imagine it will be sooner rather than later.

So, I’ll reiterate my stance: I’m happy to add AI generated content and characters to the repo. BUT. It must be high quality. Since you might soon be able to generate a thousand images in the time it takes an ordinary spriter to make one, there are going to be some quality control standards.

I’ll only be putting ones of ‘high quality’ into the Repo if they do eventually start dropping. These same rules do not hold for normal pixel art. But if you’re going to pop out a morbillion pieces of AI art, then at least have the decency to ensure they’re of a high quality level, lest the repo’s filesize explode out of control.

I’m probably going to make AI-generated sections in the repo to separate AI Art from ‘True’ artwork. Either that, or a tag at the start of the filename. Ex:
[AI] Lyndis FE7 Wedding Dress {Klok}.png

I did not expect AI to crash into pixel art this quickly. It has huge ramifications not only for the FE community but basically every other community as well. I actually made a few guesses that we’d see it by the end of 2023 at the earliest, and 2024 seemed more reasonable.

Now, though… yeah. Also please refer to FEU’s policy on art and credits.

AI- and procedurally-generated artwork have made great strides as of late, and already there has been lots of excitement about how that might change the field of game development. There is much that has been said (and remains to be said) on the topic as it pertains to us here, so we’ll start with brass tacks. Moving forward, we’ll be taking the following stance: You are welcome to share and post AI art on this forum so long as it is clearly marked as such. FEU does not recognize ownership of …

Holy crap this is awesome! As someone woth low drawing skill, this will be a blessing

Anyway since this is now a case, I’d consider adding another label beside F2U and F2E, F2T (free to train [on]) to non-ai mugs. I wouldn’t like a situation when art is trained on without the author’s consent. Even if not for moral concerns, at least to avoid unnecessary drama.

Excellent.
It would be wonderful if the AI could generate dots.
This will allow people who are not good at drawing to create great characters.
Most importantly, it would be great to have more free resources!

If you generate a great picture, please share it with us.

Edit: A compromise would be feeding the model metadata/tags on what it’s looking at and the generated output would then list what it referenced by “score” points, with a cutoff threshold if it didn’t strongly reference anything.
(Since it’s not really doing much ripping off if the end product has no key tipoffs to an artist’s style or something)

this please, make a separate plece to put the portraits that can and will be used to train it instead of just using them all

I’m not very happy about this tbh, AI generated portraits is just an excuse for people without talent to make pseudo “art” (if it can be called art at all) and diminish real people talent with this. Like, making art is something that takes years of experience, it’s not something that can be perfectioned from one day to another. This in general just reinforces my belief that people nowadays just wants everything to be done immediately.
Well, that’s my take on the subject, so feel free to disagree with me since I’m not an artist, I don’t make portraits or animations at all.

that’s really not the issue when it comes to things like romhacks because people will just end up using the same things from the repo over and over otherwise; this lets people have more flavorful placeholders.
The primary blegh part is the fact that this was posted on 4chan and therefore it’s probably going to be pretty crappy on crediting/permissions stuff, 'cause that’s how image boards are (“just reverse image search”)
If the originator of the model implements JeyTheCount’s suggestion AND F2T isn’t assumed the “default” (since a lot of artists on the repo are no longer contactable) it’ll be fine, but…

Again, this particular use case for AI doesn’t bug me that much as it’s very much a utility, and AI pixel art will take a LONG time, if ever, to ever match up to a Busk mug, so like, people can see it and more or less assume it’s placeholder stuff or just shoved in there like a CC splice
Expanding past this use case is a different story and again permissions are iffy

As someone unable to picture things in my head like most people seem to be able to I’m someone who needs something to look at something to do most things-- it doesn’t need to be the end solution but something that could be used as a starting point or idea for something.

But that’s just the perspective of an idiot, I’m not especially swaying one way or the other too much.

Well TBH it was inevitable something like this would emerge. But do not fret, it won’t replace anyone any time soon. First of all, the artwork only looks perfect and after a closer inspection you’ll see it still needs some work and cleanup. Secondly, with a prompt, you don’t have full control over what’s generated unlike when you’re drawing it yourself. Thirdly, AI is always trained to accomplish a very specific task so don’t expect different graphical styles from it.

Tbh, the rapid development of ai recently (especially when it comes to generating graphics) brings us back to a discussion old as the world, that is, “what qualifies as art?”. It’s a deep philosophical question I won’t be going in depth here but it’s very interesting to ponder.

Yeah, I think it all goes down to one’s opinion on what art really means, since I don’t make art I don’t think my opinion should be taken seriously but I mostly agree with what you said

Question, will we know the sources the AI was trained with? Because I’m not sure if AI art should be allowed to be in the repo as f2u if the assets that were used to generate the result aren’t also f2u. If AI uses non-f2u assets to generate it’s output, stuff could get really messy with attributing credit and whatnot.

If we know the sources of the AI database then it’s a fantastic tool, but we need to be sure we know the data it uses isn’t stolen from somewhere

I don’t think anyone knows what AI learned from.
It learned from many things.
All the content you used to learn in school or privately would not be F2U.
Yet you can output F2U resources.
I think the same is true for AI.

Why are humans able to learn from non-F2U data and still generate F2U content, but AI is not?

Question, will we know the sources the AI was trained with? Because I’m not sure if AI art should be allowed to be in the repo as f2u if the assets that were used to generate the result aren’t also f2u. If AI uses non-f2u assets to generate it’s output, stuff could get really messy with attributing credit and whatnot.

Do we know what sources you were trained on? AI learns by looking at images and examining their lines, their curves, their colors, and all that other stuff just like a regular artist. The only difference is it has clear 1’s and 0’s, while normal artists have a brain science has not yet decoded, but that we’re pretty sure works on a binary-like system. (See: Neurons and electrical signals.)

As for what images made up its training data, no. No we would not know. Because the training data does not copy, store, or compress the images it was trained on. It just makes ‘math’ out of lines to learn general patterns. The same way a human brain would, albeit more efficiently and a bit easier to actually examine.

Also I have literally no idea what the 4chan guy did to make those images. It could be an elaborate troll. It could be a Model, a Hypernet, an Embedding, or a Surface Layer Addon, among other possibilities. Until it’s actually out (assuming he even posts it; he might just keep it to himself) we’ll have no way of knowing.

But either way. Artists don’t list all the ‘source data’ they use to create their own style. Or am I expected to believe that in a community of people deliberately mimicking and altering the GBAFE artstyle that nobody here ‘trained’ off the works of others? I don’t think artist’s work come out of a vacuum, and style is not copyrighted. Only individual images. 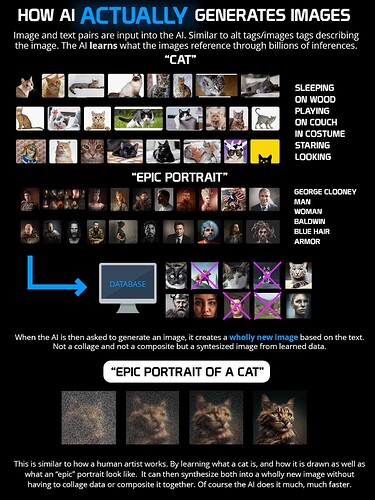 Fair points, I suppose I was under the impression it uses images to generate images like the old portrait generator.

It’s pretty awkward to realize how far tech has come that it can imitate human activities like this, but at the end of the day it’s like using a calculator instead of pen and paper. It makes the process of doing things faster.

I look forward to the day when I never have to set my eyes on another spliced Raven portrait or Elphin portrait again.

can you not with those thumbnails

My opinion about AI Art:

You know what, upon further rumination, I think it defeats the purpose of both AI image generation in romhacking and the repo to upload AI generated images to the repo.
The intention is to have a utility to rapidly prototype character portraits so as to get a feel for the character and be able to add that sweet [COMPLETE] to your title. However, you could just grab someone within that archetype from the repo already. Thus AI would be for generating a specific character, in which case what are you putting it on the repo for, fr…

Also Klok’s argument kinda pisses me off… It seems well-reasoned until you recognize that context is a thing. A human will dedicate hours to understanding why a line width was a certain way out of respect for an artist; the AI just averages out an interpretation, and the human entering the prompts is even further disconnected from the process of creation. I can accept AI image generators as utilities or tools just fine, but to argue there’s not much difference is disingenuous.