Which Hack Character Do You Hate The Most and Why?

From the creators of Which vanilla FE character do you hate the most and why? comes the sequel you’ve probably anticipated:

Which Hack Character Do You Hate The Most and Why?

I don’t particularly have any strong feelings towards any characters in the hacks I’ve played aside from how Storch (Vision Quest) used to be very comparable to Roy.

They don’t have to be playable, just to clarify.

TLP’s Logan is an absolute annoyance, having to pick between him and Asch is a very easy choice, and I don’t want his horrible swordplay.

I’d have to say Lawrence from The Heroes We Deserve Val from Requiem. She really never felt interesting, wasn’t compelling enough despite her interactions with other people, say her mom, and it was her arc that made a really bad impression on that hack as a whole. 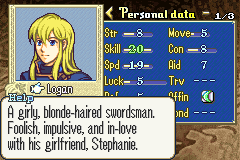 Logan is a blonde binch period

That guy Eric from THWD keeps getting nerfed. He was never even that good before!!!

Real talk hope this thread doesn’t devolve into people saying that they hate other people’s self inserts.

Nah she’s dope have you even used the MAJESTRA??

Real talk hope this thread doesn’t devolve into people saying that they hate other people’s self inserts.

I like to believe folks are better than that.

oh right Majestra exists, it’s actually really cool and makes her a decent unit, as long as you’re okay babying her for the first five chapters until she gets it

the rest of my complaints still stand though

I don’t know man. That Eric is suuuch a bad unit!!

I think calling her portrait ugly is petty. Laurent made a new one and she looks fantastic now.

Probably. I don’t remember seeing the new Laurent one, but given that it’s Laurent, he probably made her look a lot better. (My opinions were based on memories of an older build, so maybe Caladrius has updated her writing too.)

For me, probably Dione and Roswell (even though he’s a villain) from OCA, since in their appearances in Ch 18 (Dione) and 13 (Roswell), they’re anti-turtles, which is a good thing because anti-turtle good, but they felt a bit too strict for my taste. Maybe my team just sucked tho. Maybe I suck. Still beat the game tho. At least Roswell’s final fight was cool as well.

I wish I had strong enough opinions about peoples’ hacks to hate their characters
I need to play more hacks past the first few chapters :c

I don’t have many negative opinions on characters from hack, but if there was one character I really disliked, it would probably be Aderyn, the lord of J&P. I always felt she was a very uninteresting main character and that she was very much a Mary-Sue. More importantly, she stole screentime from Luigi.

The Road to Ruin: I forget most of the starting parties names. But everyone including: swordmaster girl who spoilers promotes /end spoilers. So If i ever go that far she would suck donkey doodoo cause I never used her. Archer boy just didn’t like. Pegasus knight torie? I hate her mouth and her mouth animation and refuse to use her because of it.

Same. Though I think I need to play more hacks in general. Out of the ones you’ve started, do you have a character who left a particularly noteworthy impression at all?

Siegfried from TLP is an arrogant prick and his son is a whiney piece of shit.

not a fan of tlp anakin, to say the least