What is the worst boss in the series (ROM hacks included)

It can be because of a build up that failed to deliver, because they are way too op or anything else.

I’ll start. Hard 5 medeus from fe11. You know there’s an issue when the method the game keep telling you to use doesn’t work because of how op he is. You pretty much have to send your units to their deaths to make a small scrach on him.

Shadow Dragon has a lot of annoying early game bosses… and medeus…
However Hyman.
Hyman is why I don’t play on any difficulty past hard 3, that man is dangerous, that man has a hand axe, meaty hp, and big boy attack and speed, and is apparently able to dodge almost anything with ease.

You either crit him with Pogma or you gamble with Barst devil axe gaming.

oh yeah him. Doesn’t he also drop a mend staff that you pretty much needed in this fight just to add insult to injuries?

Just use the fort to heal and spend 200 turns fighting him, what’s the big deal?

to this day I’m salty about final bosses that you are required to use a certain unit to kill. No, let me play favorites and kill the final boss with a gay person. What the hell???

Whaaaaaaat, Hyman’s like the easiest of the first three bosses! You said it yourself, you have killing edge Ogma and devil axe Barst. And you also have two save points to go for those things separately. I’d much rather fight Hyman than god damn Gomer where you bank on Ogma dodges.

Fuse the three of them

You making it too overpowered. No unit will be able to take down Gazzoman! 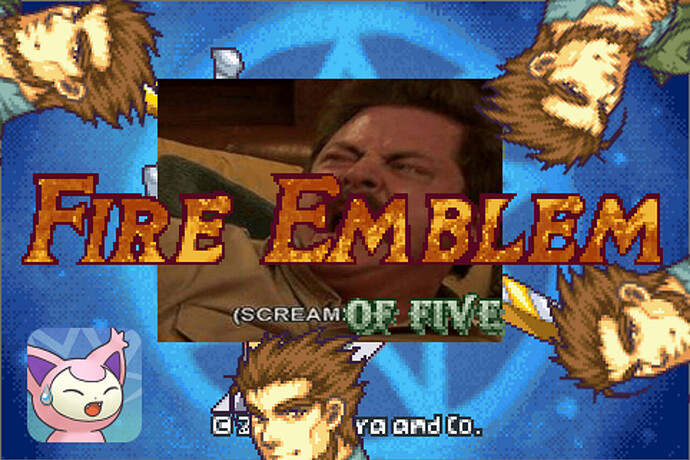 you have much fewer healing options other than the fort, he also has a handaxe which in case you didn’t know is 1-2 range, combine that with being much more speedy and if you don’t use savepoints (which generally isn’t even counted) this is by far the riskiest strat of all, you can’t have a unit tank until their weapon breaks or chip with javs like with Gazzak because Hyman’s simply too powerful, and again, you still only have a max is two-three vulns, one heal staff, and a fort.

Why wouldn’t save points be counted? Nobody is going to play FE11 or FE12 and ignore the save points. KE Ogma + DA Barst is a clear combo that will always kill him and the save points are there to be used.

Save points are there for those that want to use them, the fact is fishing for crits and hoping for weapons not to hit you instead all with around a 60% hit rate is very unreliable at best.

If we count save points then I guess Medeus isn’t an issue at all since you can just put crit on a ballista and keep resetting the chapter until you crit with both them and tiki, now of course no one would argue that however your argument is practically the same thing.

What about an ironman setting? where you can’t use save points?
Unreliability can’t be ignored simply by slapping a save point there and saying that they can RNG abuse, by extension that would make the entirety of FE4 perfect because you can RNG abuse until Sigurd crits literally every enemy he can possibly crit and do the same for Seliph all the way to the end, is that really a good argument?

Assuming the player can’t or doesn’t use a game mechanic because of their own self-imposed rules isn’t exactly a good argument either. You have to consider this stuff in context. I could spend a super long time having Ogma go back and forth between Hyman and the fort until he kills the boss safely, OR I could just use the save points to rig two specific rounds of combat, which doesn’t take nearly as long.

siegfried for gameplay reasons. I only promote at 20/20 and he was practically unkillable with almost everyone in my army and has 3 range weapon, just bad design all around.

story wise, fire dragon, because it just kinda does nothing

rigging the RNG in your favor should NEVER be used as the reasoning for why something is okay, let’s do the examples again

FE6, 7, and 8 are now all free from criticism when it comes to bosses because you can arrow dance your way through all of them.

saving and resetting a game is perfectly okay however it should never be assumed, that only opens the door to poor design decisions and makes them look okay.

it’s the same as assuming the player will want to use the turnwheel to rig certain fights to go in their favor or stop characters from dying, that’s a get-out-of-bad-design free card.

having to physically turn off and on your DS to replay sections of a game should never be assumed, unless you’re an old NES game that doesn’t have saving you shouldn’t build your game around the fact that players can and will abuse the fact that your game has a save feature, that’s just awful awful awful design.

I don’t know how I can make it more clear how bad of an idea it is to assume players will reset their games to rig crits, you’re basically doing the equivalent of restarting a hard pokemon battle over and over again until you crit enough times to win.

You’re missing the point. GBAFE doesn’t have save points, so you can’t rig boss fights that way unless you use save states, which are not part of the game itself. DSFE save points let you save at any point in a map, including right before the boss, because the save points are specifically a game mechanic. And I’m not making this about game design, I’m making this about “what’s least annoying/least time-consuming for the player that can be done on original hardware.” You’re not even turning off your console to do this, just use the soft reset button combo.

You have a good point. Why bother playing through the map as many times that you get tired of it. That’s we have DSFE save points to save the hassle.