Has anyone noticed that enemy units move in a set order? It seems to be based on their position in the team table - or for those using FEBuilder, the order in which the units are placed.

This is why it sometimes appears the AI is thinking in five dimensions, and why at other times the AI appears to be choking on its own inadequate brain cells.

I feel the potential of deliberately placing units in the table to move in a certain order is overlooked. It has very, very low returns versus effort, but can change the flow of a map a lot and enable or prevent “offensive turtling” tactics where the player advances aggressively but creates dynamic choke points regardless.

It also makes weapon triangle and overlapping range mechanics more dynamic in some cases - if the sword unit is placed before the axe unit and they have overlapping range, and the sword unit’s approach would prevent the axe unit from approaching, it’s a different attack strategy from if it was the other way around. Might also make changing which units you deploy a bit more intuitive without having to implement fatigue - but, of course, it would have to be telegraphed or the map would just have to be ridiculously hard without a certain team composition.

Has anyone experimented with this?

Would it be better if this behavior was altered or made irrelevant - say, through ASM that changes table position for move order based on a seed so that restarting or reloading the chapter changes the order?

That is how the unit move order is decided. I think it should stay as is. It’s become second nature at this point for me and my workflow.

From Shuusuke on discord, this seems to be all the factors that decide movement order (from top to bottom in terms of priority): 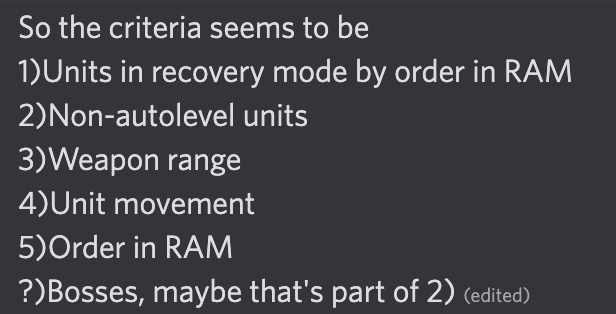 Edit: I believe having a commander drops priority, as well as having staffing AI/dancing AI.

Recovery is it’s own special thing with priority, then non-autoleveled units go first, sorted by move and then by order in RAM (commander and weapons are irrelevant). Autolevelled units are sorted first by their commander. Units with a lower-numbered commander will move before units with a higher numbered commander, regardless of range or move or position in RAM.

Within a given commander, the order is basically:

Additionally thieves get a +60 bonus to their priority score (so assuming that they’re armed, they’ll move after staffers), while units who either have the lord flag, or are their own commander (their unit ID matches their commander ID) get a +87 bonus (meaning they move last).

Within a given group, ties are broken first by movement (lower move units move before higher move ones) and secondly by order in RAM (which initially corresponds to deployment order, but can get changed up as units die and reinforcements spawn).

If you want to choose exactly what order the enemies move in, the easiest way to do it is to set them all to be auto-leveled and then give each of them a unique commander ID. Assign a commander of 1 to whoever you want to move first, and ID of 2 to whoever should got second, and so on (note that if you’re using an AI that actually looks at the commander field, like AI1=0D, this will obviously mess it up, otherwise nothing really seems to care about the commander field).

Well obviously they need to move in… some order.

That’s why bosses are usually first on the list.