[so far] we have enough of these “masterpieces” to have a full cast of playable characters. 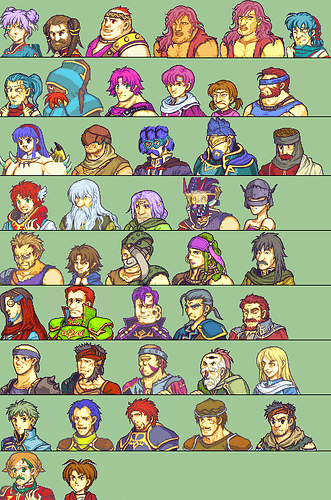 You heard the Shtick,

We’ve got a full cast of cruglies here with the potential to become the greatest ragtag crew ever assembled in a Fire Emblem fan game (yes, even better than [insert your favourite fan game, mine’s probably Avenir]).

Together, we’ll try our best to get the ball rolling for these abominations.

For your character(s), come up with:

In the backstory write up portion, focus on the character, not the setting. Feel free to include generic nouns in [ ]'s (e.g. After his parents died, Jim enlisted in [Kingdom]'s army). I know it’s weird to create characters in a vacuum like this, the trick is to not worry too much about it.

3 units will randomly be determined as lord units during the divvying out part. Given that lords are unique, you can ignore the class restrictions listed above and just list which type of weapon they’d use at tier 1 and if they’re mounted or not (we’ve got animations for everything nowadays) instead.

In addition, lord units get an additional 6 sentence paragraph dedicated to describing what they’re lords of (kingdom, country, etc.). If they’re a non-traditional lord like Ike or Micaiah, feel free to use this paragraph to flesh out whatever faction they’re the ‘lord’ of instead.

Just reply here, I’ll add your name to the list. After we have enough names I’ll randomly divvy out the mugs to the participants (2-3 each? I’m assuming we won’t land 22 or more people for this, we’ve got 44 characters to work with).

To have fun and maybe set the foundation for 2021’s masterpiece if somebody wants to run with this questionable cast that will indeed, be the motliest crew that ever graced a Fire Emblem fangame.

There’s no real deadline after they’ve been divvied out, and you don’t have to keep your characters secret, you can collab with other participants if you’d like. This is all for fun.

Can’t wait to see how many brooding edgelords this results in.

“But Chair, you can’t write a compelling and interesting character in 6 sentences along with a few character traits, Fire Emblem characters have so much more depth to them that boiling them down to simple and easy to understand concepts would be doing them a disservice!”

Count me in. This will be very epic:tm:

respectfully, and would like to try this out as well

Well, no real deadline means no real pressure to finish it quickly. Count me in

When we have enough names you’ll be assigned 2-3 characters randomly from the list, whether or not you were involved in splicing the characters together isn’t really part of the equation here.

Alright, count me in or something.

Eh, this honestly sounds like fun. Count me in!

Oh, and make sure to go grab my newest submission to the Create an Ugly Mug thread. Wouldn’t want to miss out on a perfectly (not) good character, would we?

We’ll just go ahead and use whatever’s in the thread whenever the arbitrary timer is up.

What’s the worst that could happen?

Hmm, I might be up to do something, count me in!

Might as well join the fun. I’ll give it a try.

I have been pinged. Therefore, I must join.

Well joined up because it’s kinda my fault Chair is starting it up in the first place.

This seems quite fun, I’d also like to put my name in.

So we are basically practicing our writing skills with these odd one’s out?
All right, let’s do this!
Count me in! I’ll give these poor misfits the great characteristics they deserve.