Hello everyone this is my first project. you see i always wanted to make a rom hack but never really had the creativity to do it, but then after i started tinkering with FEbuilder i decided to give it a shot anyway.

The sacred Ripping was inspired by all those shovelware indie games you see in steam and google play. because when i see something being done that bad i think, “i could do better”.

And so this hack is about doing small changes to FE8 and making it look like it’s an original hack. to do that i randomized it using yune and begun work there

this hack features:
Personal weapons for the “lord” charecters 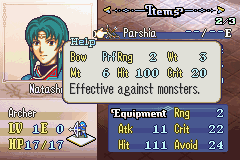 Overclassing tho it’s only for the “lords” 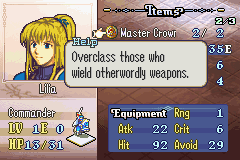 Slightly changed maps to REALLY make it look its original 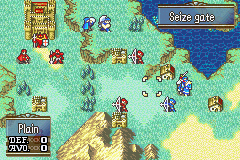 And different placement of units in some maps 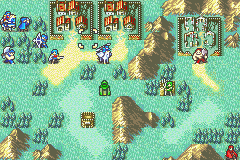 My ultimate goal is to create the ilusion that this is a good hack. to really emulate those shovelware games

that being said, i appriciate criticism so maybe one day i’ll be able to create a hack thats actually good. And tell what you think of it. have a good time!
All credit goes to thier respective authors for the assets i used

Anniversary edition! at long last, i somehow made it. the tower of valni and lagdou ruins have been tampered with. including an original story, in the shape of varius boss quotes with the OC charecter that i copied added to the game as bosses in the tower and ruins. also “special prices” are waiting withing the chests of the final floors of each. and finally enjoy! and thanks for playing. this is the final update unless more gamebreaking glitches are found

I can sense the channeling of Rosenkreuzstilette with this one. Looking forward to trying it to see how it handles the nature of the spoof.

plan to add the skills system?

Maybe. i was working on a “Anniversary Edition” but it has not been a year.
do you think i should?

Hello there! I have played your hack up to chapter 3 and I have enjoyed it a lot! The music, portraits and overall interface looked pretty good. It was a lot of fun playing this hack! If you were to balance the game in the future, I have a couple of tips:

This is my opinion of course and you don’t have to change anything if you don’t want to. This hack was really fun to play and I’m excited to see what it may become in the future!

wow! thanks a lot for playing and giving feedback!.
Yeah… i got no excuse i was just messing with fe builder until i got something barely playable but to adress it anyway.

lastly most if not all gamebreaking glitches were fixed in the anniversary editon. which i probably gonna relaese before the actual anniversary since its almost done and i should probably release it before i get too many crazy ideas.
and again thanks for playing. stick arround for when i give the tower of valni and lagdou ruins an “Original” Story

I will surely stick around, this hack looks awesome! I wonder what the story will do. A magical beacon bow makes sense to me. It will allow you to those nasty heavy armors easier! I’ll look forward to hearing more!

What’s the progress like as of today in August?

Well i have not found any gamebreaking glitches, so the current version is the final.

So what are Master Crowns used for? I’ve tried to use them on the Lords but they didn’t work.

they’re used used once the “lords” natasha and garcia, are tier 2 which would be sniper for natasha and berzerker for garcia