​Hey, I’m not really an active presence around here. I’m usually around Serenes Forest though. I’ve done some ROM hacks for several games in the series so far, but it’s just been experimenting with gameplay rebalancing stuff. This is my first full scale project. It’s called the Fall of Thabes. It chronicles the three days in which Thabes fell under Duma’s assault as mentioned in the Valentia Accordion. The gameplay is pretty much done already, featuring ten-ish maps. Instead of being basically the gameplay of Sacred Stones with original maps, I changed up the way the game is played quite a bit. The main list of details is as follows.

-Uses Gaiden’s magic system. This patch is still a bit buggy, which is annoying, but there’s not a lot I can do about it.

-Like in Thracia, Res is used for Magic and Resistance. This is better to have dual magic and physical users in the gameboy engine.

-A lot of dragon enemies. Also uses original Mystery of the Emblem’s elemental effectiveness on dragons.

-Due to a large majority of enemies being dragons, there is no weapon triangle.

-No staves or healing magic. Originally this was because the Gaiden magic system proof of concept I was using didn’t allow for it, but now I’ve designed the game around it. Elixirs are in abundance, but if you want a unit to heal, you have to take a turn out of combat to do so.

-Limited resources. There is no way of accessing the supply. So you have to be a lot more careful about what weapons you use.

-Trading works by SNES rules (ie it doesn’t cost an action to perform) because managing resources is so important without a convoy.

-Most stat boosters now boost one point at a time, but have three uses. Stat boosters are also quite common, meaning choosing who to use them on will have a rather large impact on how you’re army grows.

-Minimal cast, full deployment. There is no preparations screen at all. This is because there’s a lot of stat boosters to be had and choosing when to use them rather than performing an action with a unit can be critical, especially in some of the later maps.

-No weapon ranks. The game feels too short to justify them, especially when you also have magic as a means of attack. Well weapon ranks do exists, it’s just every weapon is set to E.

I’ve ported chapters from various other Fire Emblem games that feature the ruins of Thabes as a setting. This isn’t done out of laziness as all the chapters play very differently to their original game, it’s more like continuity fan service.

Chapter 1, based on the Fire Dragon Graveyard from Mystery of the Emblem. 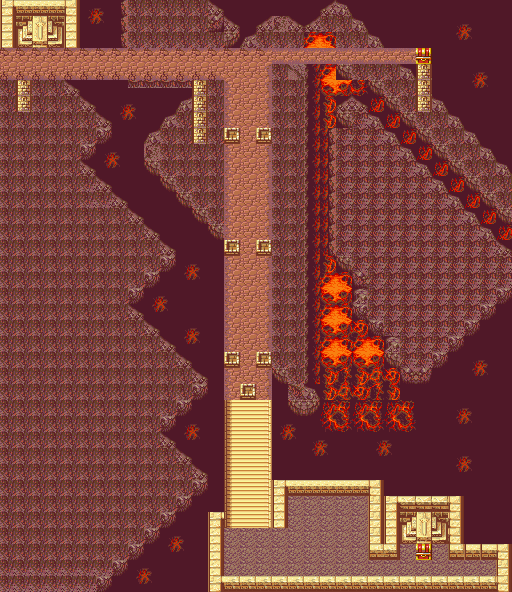 Chapter 3 is based on Anri’s Way, also from Mystery of the Emblem. This one might not initially look similar, but all the sand dunes and the tower to the left are tile for tile recreation (although some of them look a bit wonky since making straight vertical walls seems needlessly difficult for the default tile set). 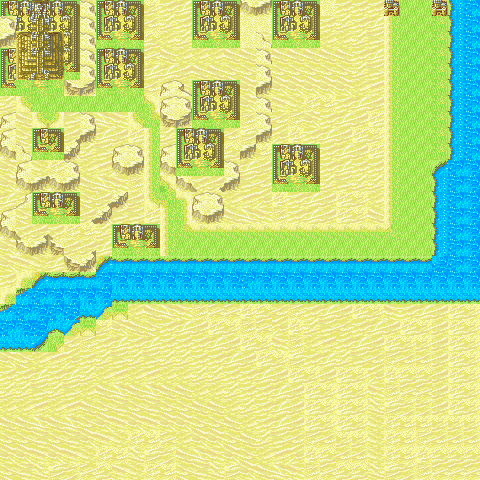 Chapter Five, base on Furia Harbour from Shadows of Valentia. This one isn’t a tile for tile recreation since it’s not a gampelay map but an exploration one, but I still wanted to include it. Even though this is the least likely location to be in anyway similar when you visit it in Echoes, three thousand years later. 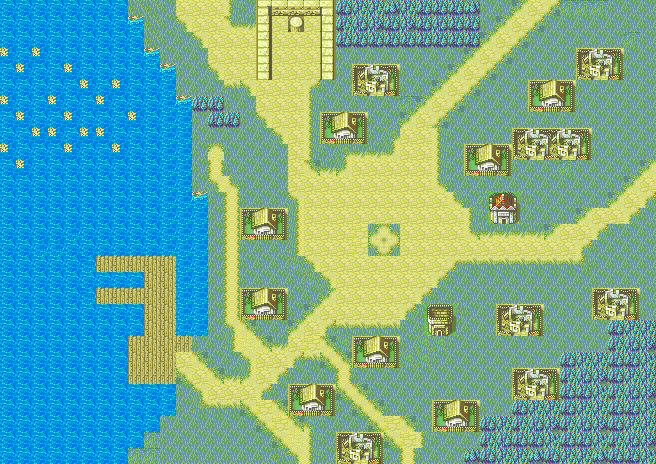 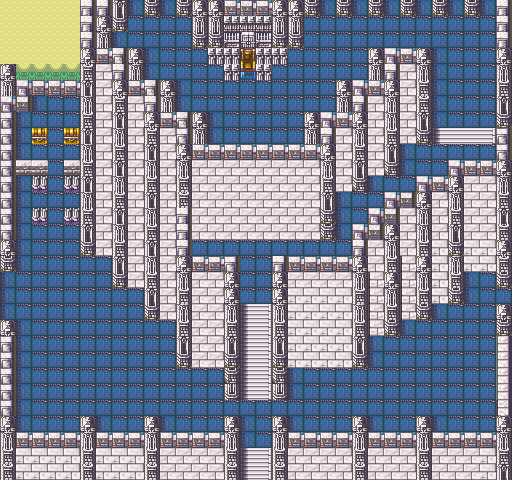 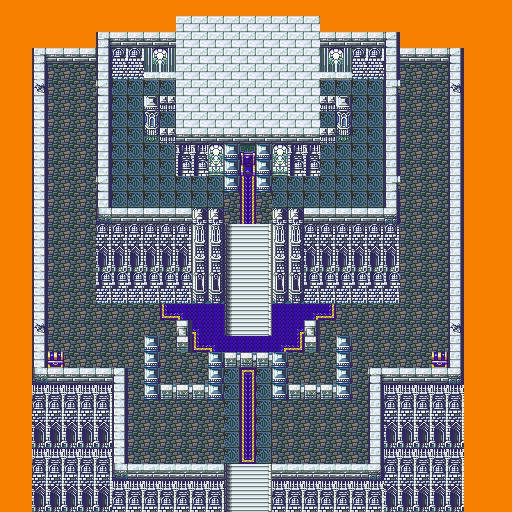 Chapter 9, based on Disowned By Time, the ruins you find Morgan in in Awakening (though not pointed out, that area is located where Thabes is on the world map and you find a Naga’s Tear there). 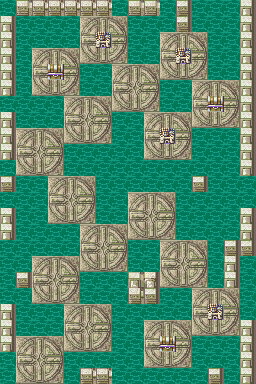 And the final real chapter, Chapter 10, based on the area you find Grima in Shadows of Valentia. 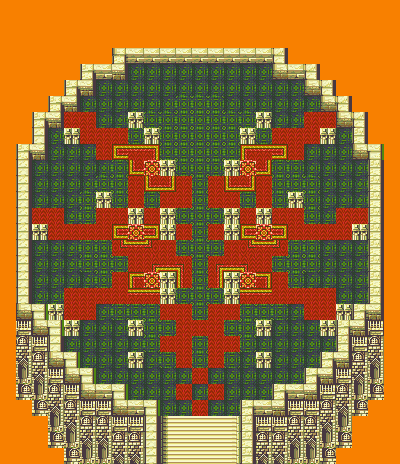 So now you’re hopefully thinking gee whizz Jotari, this looks excellent. Where’s the download link? Well, obviously from the title it’s not finished. All the gameplay has been finished, however the script has yet to be written and I would like some more original art assets. Or at least people who are better at recolouring than me. I’m looking for three things primarily

-Portraits. Right now I’m using sprites from the base game to represent characters, but I want original portraits and I’m rather terrible at that particular artistry. What’s more, I specifically want all the character from Thabes to be darker skinned. It’s a kingdom founded in the middle of the desert so I feel their ethnicity should reflect that (with the exception of one character).

-Magic using sprites for physical classes; Every unit can use magic in the game, so I want battle sprites for stuff like Arches using magic. This is probably the biggest task I’m asking help on and is also probably the least necessary, as right now I either replace that characters battle sprite with a magic one entirely or have the game awkwardly try to figure out how to use magic with that class. Still it’d look cool and professional if units seamlessly transitioned their animations between physical attacks and spells.

I’m willing to provide the download link to people helping with the project, but I’ll wait until I have a script written before releasing it for general enjoyment. If no one has come onboard by then, I’ll do my best to try and implement the art changes myself (the portraits are the most needed and the ones I’d be worst at making, but I’m hopeful that’ll be the one I’ll get the most willing helpers with). So, what do you think of this project as a basic concept, and if you’re into the spriting scene, would you be willing to help me out?

Oh and when I say the maps are done I mean all the enemies and stuff too. Not just the background. I know people aren’t really eager to jump on board a project that might not ever finish. This one will be finished even if no one helps me. It’ll just look better with people who can do this stuff better than me.

You’ve got a few copy/paste errors in the post where it just says “[image]”, fyi.

I saw this posted when I was skimming SF the other day, so I’m glad you posted it here as well. I really like the thought that went into the gameplay changes - I don’t know how they’ll actually play out in execution, but it does look like there was clearly thought put into them, how they would mesh with each other, and any repurcussions that they might have, and they leave me interested in seeing how they shake out.

However, of what’s posted, the maps definitely could use a refining pass - there’s a lot of straight, unnatural lines, missing shading/tiles, wrong tiles, overuse of tiles (“tilespam”) - I can respect an attempt at accuracy to source material, but it’s also wise to make the source fit the mold that it’s going into and improve upon it (especially if it’s a map from FE1-3). The GBA tilesets can do more, and with some clean up and adjustments, the maps would like quite nice, I think.

For the physical units using magic angle, your best bet, at least temporarily, is to make abundant use of any Ranged animations you can - Magic Sword frames, Javelin frames, etc. Everything they do is a “spell”, you’d just be replacing the Javelin toss with the magic spell animation, etc. I don’t know if there’s a patch that globally fixes the Hand Axe issue (animation frames set to wait for the axe to return, but if you call a different “spell” animation, it just sits there because there is no axe to return), otherwise you’ll run into problems on those ones. Luckily, some of the animations on the repository have custom “Magic Axe” frames to solve this problem for those ones.

Yeah, the desert map in particular needs some work. I feel like I’m missing something obvious, but the tile set doesn’t seem to have any means of making a natural straight vertical line. It’s all corners. Regarding the axe animation, that shouldn’t be too big a problem given I don’t have any playable fighters. So far I’ve just been pasting mage sprites onto the physical units. I know some of them can work for magic animations, but they look pretty weird. Weird is better than nothing however.

Would you like me to help clean up the maps? I can really see some potential in this.

Hey, this seems interesting! I really like the lore behind Thabes and I’m down to see an expansion upon it. It’s probably one of my favorite elements of that particular setting, largely because of Echoes. Afraid I can’t do much to help, not very artistically inclined, but good luck! I’m intrigued to see how this will turn out!

I had someone else pm me offering to touch up the maps too. As of now they’re not really the priority, but if I can get some sprite/portrait artists on board then I’ll make a Discord group and invite anyone who might feel inclined to touch up the maps.