My original statement about starting this after FEE3 is still there, but i have been working on the tileset and some weeks ago traced those maps and i wanted to post those before making a go. As any good mapping project starts with a tileset! 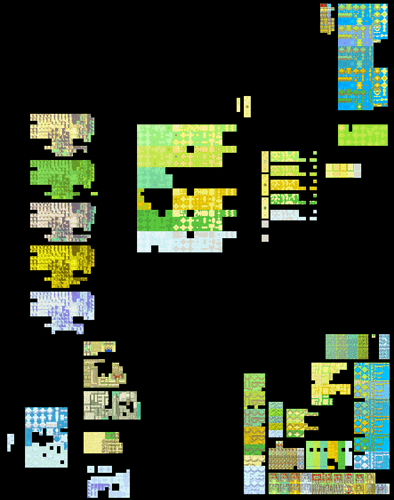 As far as a bit of info, this project at-least as far as planning is going to include 6 different tilesets, all of the FE6 & 7 Maps featured on said tilesets. And going to have biome changing as a result of the last statement (as opposed to jugdral being different seasons, of which the current one being spring and on another note ill post that later today)

Well that only took two days… 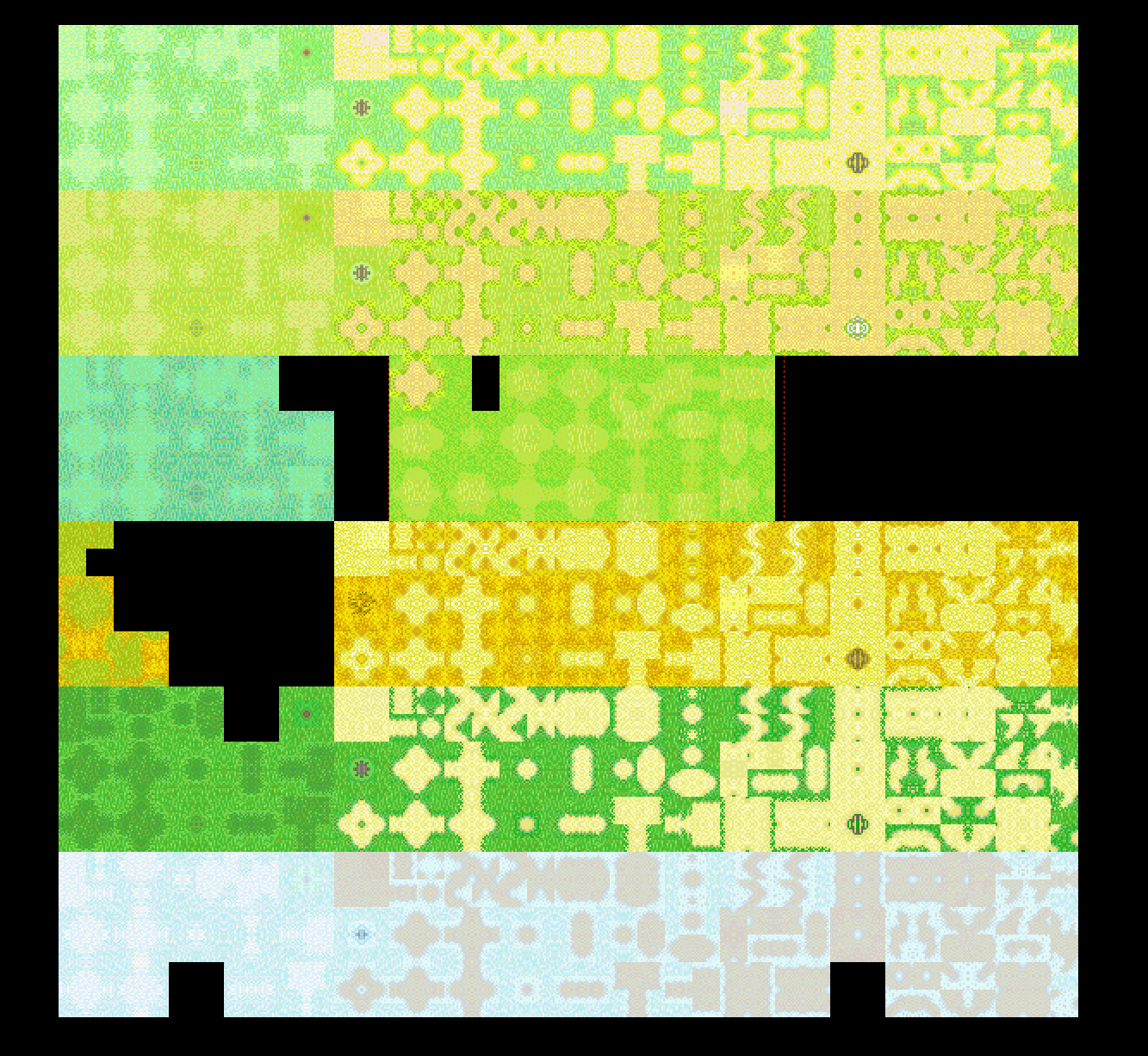 To Celebrate the 20th Anniversary of The Binding Blade. The Elibe Continental Project is a go! Which should (i wrote a massive thing for a Reddit post, but that’s probably unnecessary here.) be the largest tilemap ever created.

But the actual map itself is 1500x750 tiles (i had to downscale the image in order to even upload it XD so due note the tiles are sized normally) which is about 8 times the size of Britain & Jugdral. 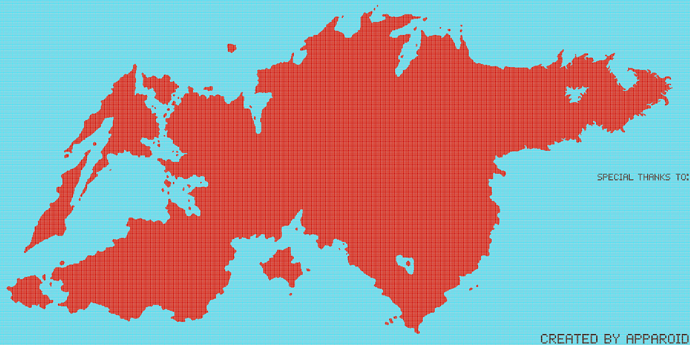 Impressive, you make me want to attempt this for my own world map… despite that being horribly impractical!

This is going to be a really big layout for the continental project. Hope you are up for the challenge and wish you luck.

Due to the nature of this stage of the project I can’t really pad this thread out with progress posts without cringing at myself for doing it. That being said though I’ve made a fair bit of progress with the map recreations:

Most of these are extremely subtle tile corrections/alterations. That said though a couple did get changed a fair bit. Of which those include:

So I’m still progressing on the chapter maps currently. But I recently did the dragon shrine entrance map from the end of fe6. And there’s a contradicting dilemma that I need opinions on. And that’s the only body of water on my trace map. 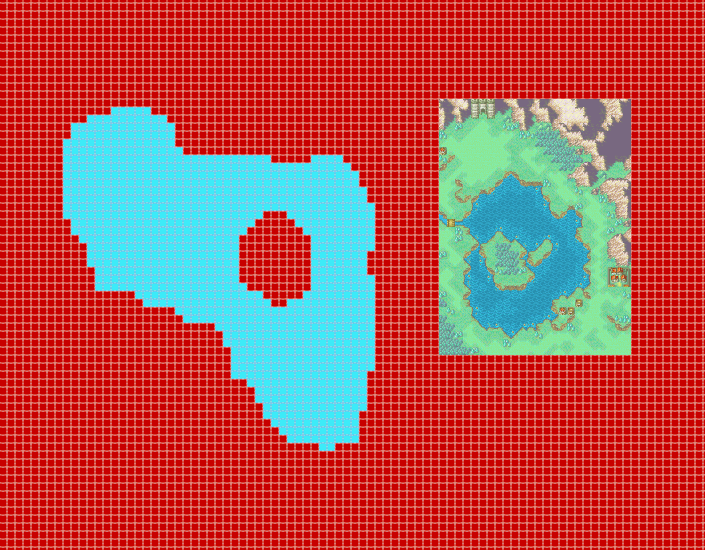 Which a large lake in Bern that has the dragon shrine thingy’s entrance on one side of it. In the chapter map its a lake with the entrance on the northside. But the world map has the lake in a different shape with a river from the north. And also the shrine entrance is located on the mountain range south of it

As this is a world map project, I’d go with making it as accurate to the world map as possible. Some things will be a little off from the actual game, but that’s okay. If someone actually used these for an LT/FEXNA project, they could always edit the map if they needed to do so.

Next up, App’s gonna make the entire FE Globe

Given that game assets in the GBA titles rarely match their official artwork (weapon icons looking nothing like their art, etc.), I think going with the world map makes more sense. (Albeit, in this case, I think the concept for the map in FE6 is that they chose to make the map flow south to north but is still depicting the same north to south path on the world map and just made up whatever they wanted for the lake’s design/shape for gameplay purposes.)

Next up, App’s gonna make the entire FE Globe

Nope, this is gonna be my peak. Also I had a trace of Europe that was 750x300. So you can math that one out, but I would assume that’s 1 of 9 panels. So that would be like 2250x900? Eitherway I’m never going to do that… ever. And even if I contradict that, it wont be nearly as large as this.

either way, this is impressive stuff, my guy. good work

So while I plan to add some more maps from outside FE6 & FE7 to embed onto this project. I’m not going to specify more than that for right now. 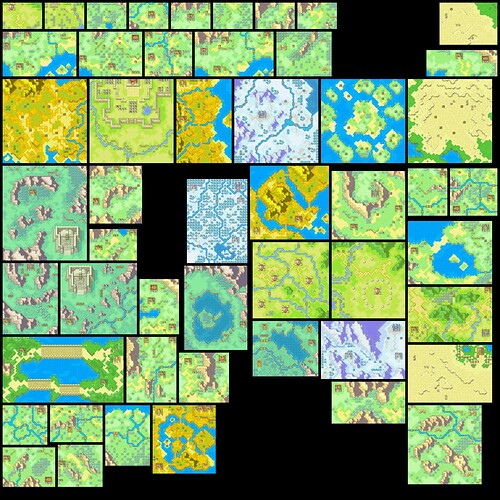 Chapter Maps31920×1920 643 KB
This here is all the outdoor maps from the two games in the 6 tilesets/biomes included that I’ve compacted into a 190x190 box. And honestly it doesn’t look that crazy to me now XD.

It should also be noted that every single one of these was traced and refurbished completely from scratch. And also special thanks to @Koni for volunteering to do two of the snow maps. If anyone wants to contribute in some fashion to this behemoth and get there name watermarked onto the map, be sure to contact me on discord at: Apparoid#9180

Also on a side note, I’ve been developing this mega tileset thing since like 2 years ago and it wasn’t until a week ago that I actually used the snow portion for the first time XD.

Hey. I see that some of the FE6 trial maps are in there. Would those really fit in the canon continent? I think there’s a possibility that those maps could be non-canon

Non-canon is for all intents and purposes of no concern to me. Considering this whole process is making 80% of it up.

Of course, i actually started working around when you asked, so I wanted a bit more to show first.

And what if i wanted him to keep me on my toes by doing so? Now don’t take this the wrong way but that strikes me as being a really intrusive stance to enforce on threads that are neither a community one, or inactive for two years.

Anyway actual status update (that’s what this thread is about afterall), started actually mapping on the main file, starting the bottom left because I’m scared at the amount of map embeds I have to consider

image1920×956 428 KB
Still need to do some paletting for this biome since the desertgrass mountains are still the same as fields ones.

Also god save the queen!

And what if i wanted him to keep me on my toes by doing so? Now don’t take this the wrong way but that strikes me as being a really intrusive stance to enforce on threads that are neither a community one, or inactive for two years.

Then he can remind you in private.

An out-of-nowhere “is this still alive?” post after 2 months of inactivity is pointless clutter and distracts from threads with actual updates.

Also god save the queen!

Ah, the famous bridge chapter. What a waste of potential.

BTW when it comes to mountains, try to spread them more. 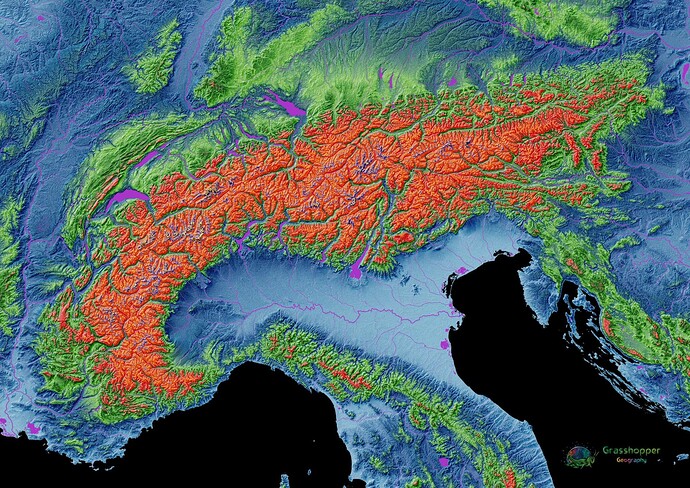