The Best FE Level Ever:

Just as the title says, FE Fans, I have two questions to ask you:

What do you consider the best level ever in Fire Emblem? And why?

Note: FE Romhacks count too for this.

The end of Fates: Conquest is amazing 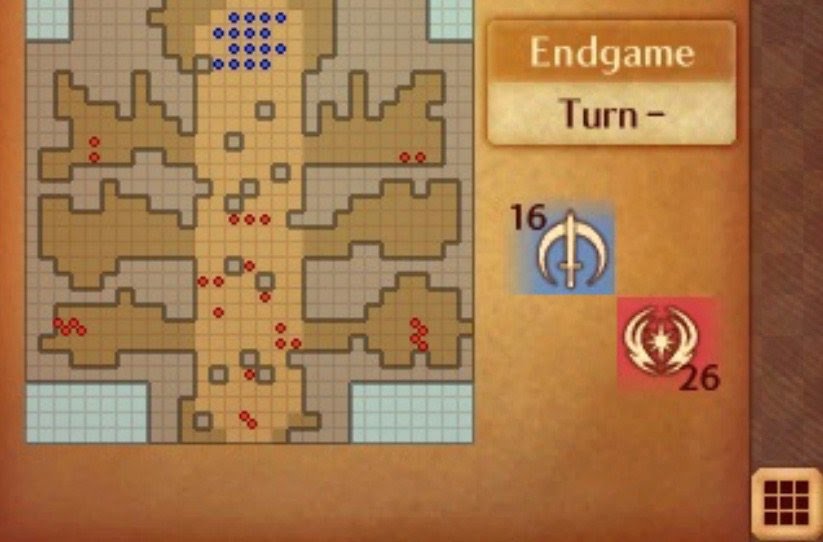 ^ This is what someone wrote on the chapter

The best level ever is when Sasuke finally confronts his brother Itachi in a one on one duel where all you do is park Sasuke on a pillar and end the turn constantly, hoping he’s not critted. Riveting gameplay.

I’m quite fond of Chapter 12x of Vestaria Saga. Introduces a lot of concepts at a natural but exciting pace. It’s just a shame you can cheese your way through the whole thing by pressing the skip button.

You know what, I totally agree with that statement.

You know what would make that Chapter so much easier?

FE6 chapter 16 is my pick for the absolute best. There’s so much going on in that map, between the chests, two recruitable characters, multiple good stealable items, the secret shop (with the member card being on the opposite end of the map on a recruitable character), the looming threat of Douglas, all combined with FE6’s generally tough enemies. Fantastic use of space and side objectives, really pushes the player to use tools like rescue chains and the warp staff and to spread out their troops accordingly to get everything in an efficient manner.

I’ll list out my favorites - my theory is that the early-midgame (in games where it makes sense, so like around Ch5-15 depending on the game) most often contains the best / most fun / most well-regarded maps

FE1/11: 14 - Land of Sorrow
FE2/15: Act 2 Celica - boat maps are iconic and using 4 magic units to kick off is fun
FE3/12: 8 - Soulful Bridge
FE4: Hard to say but I like the prologue.
FE5: MANSTER (Ch4 is probably my favorite, but all of them are great)
FE6: 11A - Hero of the West (Honorable mention to Ch7)
FE7: 19xx - A Glimspe in Time (Although pretty much everything from Whereabouts Unknown (Raven/Lucius chapter) through New Resolve (Ninian chapter) is solid, but 19 Dragon’s Gate is probably the best, 19xx is my fave tho)
FE8: 10 Ephraim - Turning Traitor (The Novala chapter is pretty good too)
FE9: 11 - Blood Runs Red
FE10: 3-9 Marauders (Although Part 2 is my favorite overall)
FE13: 5 - The Exalt and The King (Shoutout to Ch10 but that’s more for narrative/atmosphere than gameplay)
FE14: CQ12 - Bitter Intrigue (pots are a neat mechanic, remember having fun w/ this one)
FE16: Paralogue: Sword & Shield of Seiros (Most of the maps aren’t great but this one is pretty neat)

Would need to think about romhack chapters.

I like the one that had the dragon in it.

So I really liked the concept of the Nemesis’ chapter, Fodlan’s New Dawn. But it was kind of easy since Nemesis just kinda waited around until I killed his flunkies. I feel like it would’ve been a much more engaging situation if he was chasing you around the map and weakly attacking you until the Elites were dead.

But it’s still my favorite map in all of 3 Houses.

I personally agree; it would be interesting if Nemesis used tactics similar to that of the players (like actually coordinating his forces and being out there directly on the frontlines).

I’ll just each map that I liked the most from each game I’ve played because I don’t really have a concrete favorite.

FE4: For Whose Sake - Apart from the initial slog at the start, with having to recruit Hannibal and all, the end is what I really like. Arion coming out with a huge army of wyverns, and the fact that they split and invade your bases also made the map stand out to me the most.
FE5: Mother and Daughter - The Munster arc was one that I heavily enjoyed, with that heavy atmosphere of oppression and all, and the whole thing with Eyvel happening at the same time as Leif’s ragtag bunch of prisoners try to escape really give it a disheartening touch that I like.
FE6: The Binding Blade - I just really the idea of maps like these, with threatening enemies and hard bosses. The wyvern reinforcements took me by surprise, and they really made me remember this map quite often.
FE7: Victory or Death - I think I just like maps where you have to go from one corner of the map to the other with tons of enemies in the middle, especially in the lategame.
FE8: Scorched Sand - The idea of being squished between two (supposedly) intimidating generals and their armies is one that I really like, but one that I also wish was more well performed, as there’s so much leeway after the initial enemies die.
FE13: An Ill Presage - Having to fight the Deadlords who’re equipped with legendary and brave weapons really made an impression on me, especially among Awakening’s rather lackluster maps.
FE14BR: Camilla - Same reason as Victory or Death, but this isn’t as much a favorite as it is a map that I enjoyed among Birthright’s bland maps. The whole ‘‘Surprise! The stuff blocking your way suddenly blow up and the enemies sucker punch you!’’ really made me dislike the Dragon Veins.
FE14CQ: Possessed - I don’t really have much to say about this one as I didn’t really enjoy Conquest that much. It’s just one of the two maps that I found some enjoyment in.
FE14RE: A Lost Peace - This one is one that frustrates me because I really enjoy the idea behind it. Seeing Nohrians and Hoshidans fighting is an idea that I really like, but the fact that they just stand still and just have a staring contest while you have to slog through their forces and fight the random Vallite Berserker at the top of the map is just… dumb.

Generic answer but I really like chapter 10 of FE Conquest. There’s just a lot of stuff happening and not a single unit is wasted in the chapter. You’re also rewarded for using the capture skill on Haitaka and its just all around a fun chapter that (mostly) doesn’t require a lot of rng. I also like most of the Manster maps in FE5 a lot.

FE5: Mother and Daughter - The Munster arc was one that I heavily enjoyed, with that heavy atmosphere of oppression and all, and the whole thing with Eyvel happening at the same time as Leif’s ragtag bunch of prisoners try to escape really give it a disheartening touch that I like

This is absolutely my favourite map in the whole series because it marries gameplay and storytelling so well. Eyvel and Nanna’s situation feels genuinely desperate and you’re racing to catch up to them so you can help them.

Another one of my favourites is the map where Fiona joins you in FE10. I know Fiona is a bad unit but I just love the way that this map applies pressure on your units with the NPCs and the ballista and all that.

I also really like Crimson Flower’s final map. Between the music, the flames and having to kill BL kids, it’s another chapter where the map conveys the story really well.

Reinhardt’s chapter from Thracia. It’s that one chapter that will test your mastery of the game as a whole; you either be creative with your strategy on defeating The Reinhardt or suffer from trying to fight him fair and square. IMO, that’s peak level design.

Oh man, that chapter is so fun, not just to play regularly, but also to cheese. Thracia has the most fun cheese strats due to status effects never wearing off. Berserk Reinhardt slaughtering his own men after JUST telling Olwen he wouldn’t betray them is just too good

I really like FE10 2-E (Elincia’s Gambit), as well as its Fates DLC remake. It’s been a while since I played it but I feel like its flow really fit my scrub self’s ability to play. It having excellent music also helps a lot.

Speaking of Fates DLC, honorable mention goes to the Fates Gold Grinding DLC chapter, which is probably a very weird one to like and I wouldn’t be able to explain why exactly just like that but I do remember enjoying it a lot.

Conquest Chapter 11 is a masterclass:

-You need to use your whole rooster(minus one). Everyone needs to contribute as much as possible to win.
-You can choose your own difficulty by being rather passive,controling the center,managing the flyers and pulling back or go after villages,commanders and Takumi.
-The flow changes a lot between Camila,the water flowing back and the last turn push.

I don’t really know what level I would consider the best. But personally I like the siege of zofia castle from FE2/15. What can I say? It’s a siege and I like sieges.

I also really like chapter 8 from FE4. I like how you can see basically half of Thracia 776’s events within this chapter. But gameplaywise it’s not anything too special to be honest.

I had to think a lot to figure out which one is my favorite chapter, but i think it could be the battle of grounder in threehouses after the timeskip, i like it because of the atmosphere of the chapter, it becomes even better if you dont recruit the students of the other houses, its very dramatic, oh, and the music!

But in gameplay terms, i guess my favourite kind of chapters are “the defend in a castle” ones, this might sound weird, but it becomes even better if you have some green units to protect (preferly soldiers), like the chapter in FE7 where you have to protect dart Wife.