I’ll also put my to do list here as well

Put any animation Requests for me here, I’ll get to them eventually

Here’s a couple for your Todo list that would be nice to finally have.

-Eirika T2 with Magic.
-Journeyman promo to T1 and T2 that is ‘older/buffer’ looking.
-Pupil T1/T2 upgrades. Bonus if he ages in such a way as to gain some facial hair and transition looks-wise into Athos.
-Recruit T1/2, same deal.

Dark Knight would be more interesting with Axes, IMO, but that’s just a thought.

I like what you’ve done so far though! Big fan!

I think I made it a wiki post (I’m a babby, I think I did it right lol)

We can request animations?

I swear this exists somewhere, I just don’t remember where.

Yes, The second post is a wiki to let people add requests
I just put requests as its own section to make it a bit more orderly
maybe consider leaving your username by the request as well so i can know who wants what

Also got the ranged animation working

The gif lags a bit because i suck at recording them

The gif lags a bit because i suck at recording them

I like to pretend there’s ominous doom music playing as the fighter realizes the end has come. Time slows down as he thinks about the things he’s done in his life, people he’ll never meet. His life flashes before his eyes as the terrifying abomination casts its wicked magical spell, all the while staring into the very depths of his soul with its cruel, calculating eyes. The eyes of a beast. The eyes of an inhuman monster.

Slowly, the magic creeps its way across the ground. “Daddy” says a faint memory from the past. Fighter blinks back tears as he remembers the little girl he left back home. He’ll never get to see her grow up. He left her with an aunt as his wife died during childbirth. His daughter is all he has left in this world. Still, the terrifying Godzilla-fied arachnid glares at him with unblinking eyes.

It’s here now. He feels the warm, yet icy chill of darkness enveloping his body. Any second now, it will all be over. His organs will be crushed and liquified, his bones shattered into a million fragments. There won’t be enough of him for them to identify the body. His daughter will never know what happened to her father. Will she hate him? Will she hope that he is still alive? Maybe she will blame him for leaving her alone. A tear streaks down his cheek, as death comes and the final bell tolls. 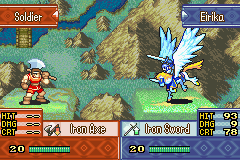 Took me awhile but I’ve got the design down for the monks.

Now I can start working on the animations

its still a WIP though

I’m planning to do the lance next