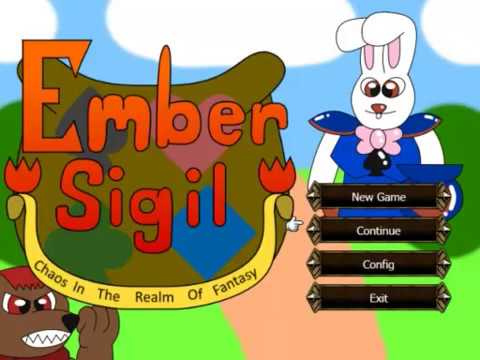 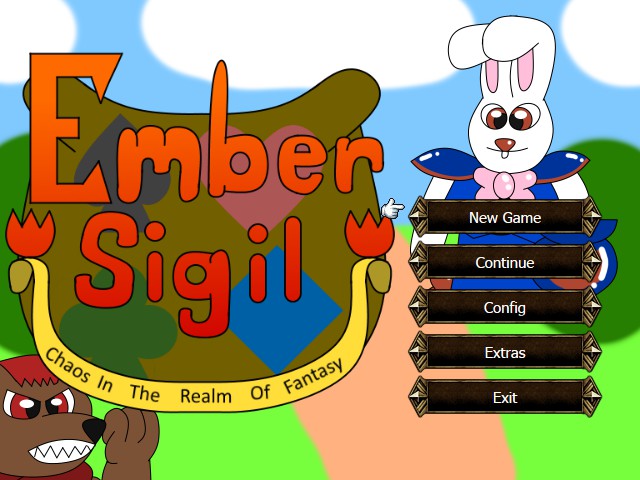 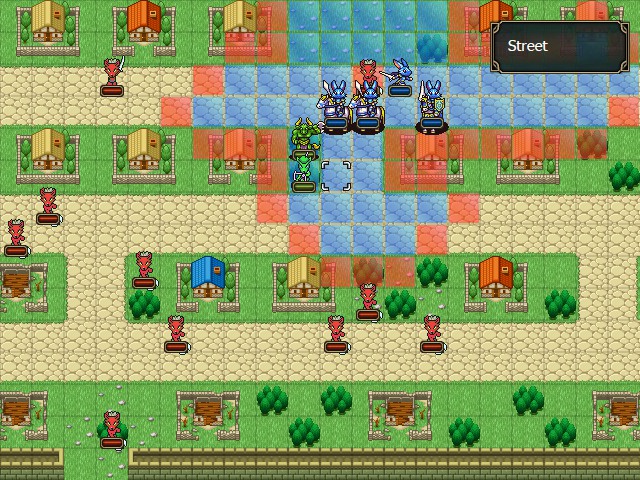 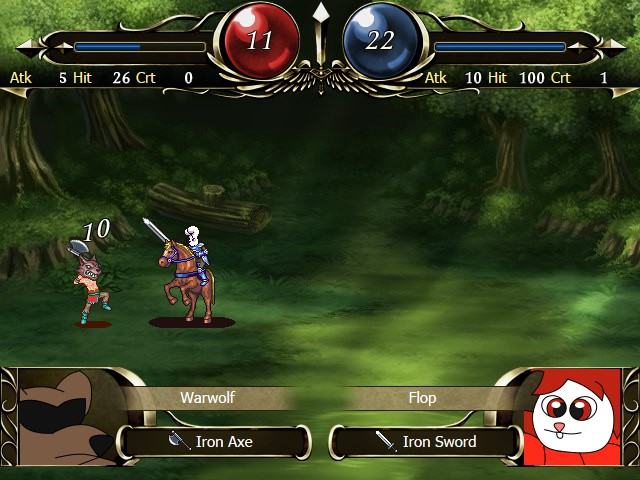 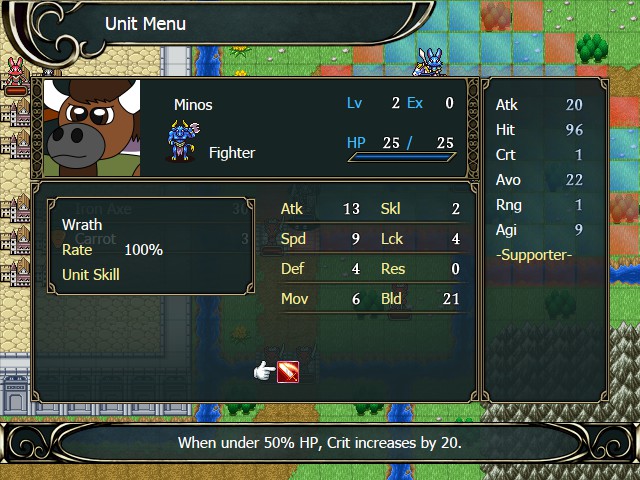 The demo version consists of 5 chapters with 1 unlockable chapter and 10 playable characters. You can control the game with the keyboard, the mouse, or a gamepad.

Plugins used were made by members of the SRPG Studio Wiki: https://srpg-studio.fandom.com/wiki/SRPG_Studio_Wiki

Also try out my non-SRPG works:

features from older Fire Emblem titles such as FE5 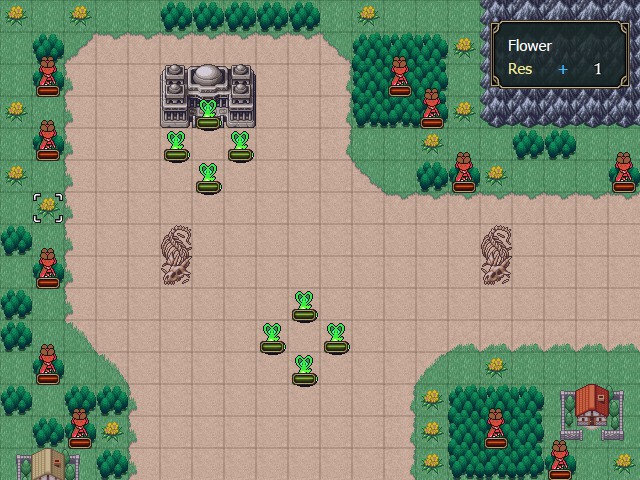 Working on a desert map today. It’s got snakes AND walking plants. I wonder if that makes this game weird. 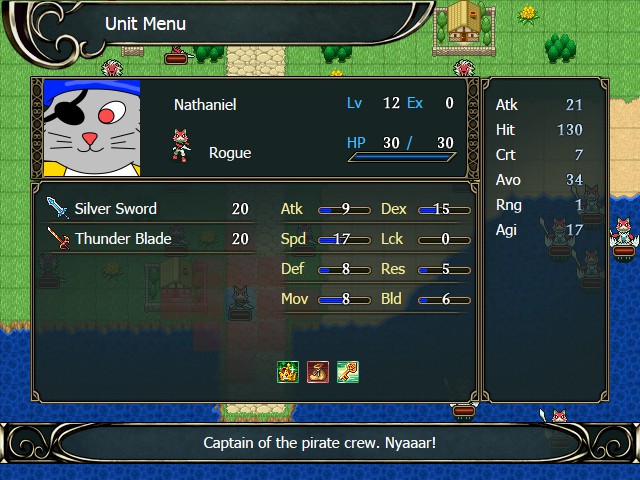 Working on this is so much fun <3

You can also see a few visual improvements in this screenshot like the stat bars, and SKL being rebranded as DEX like a certain other game… 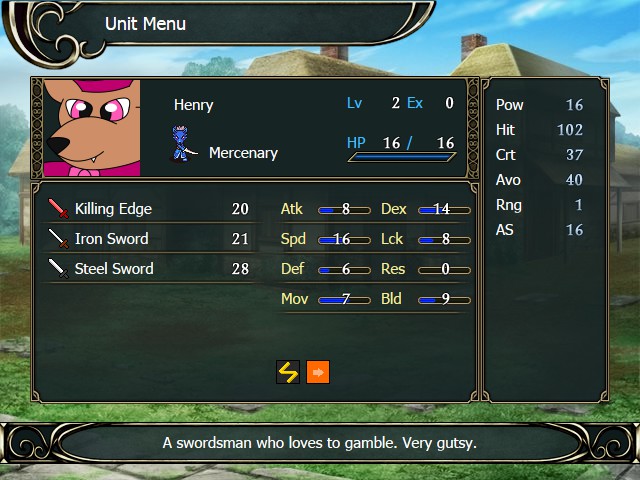 I’ve made the decision to make unique icons and graphics for the skills and weapons in order to stand out a little more.

In this video I go over the mechanics of this game:

A bug has been found courtesy of Markyjoe1990: Capturing the Chaoter 2x boss causes the chapter to be incompletable, because the objective is to kill the boss and he’s supposed to be uncapturable. My bad! Will be fixed along with any other issues found. You don’t need to capture that enemy for any reason anyways, so don’t worry about it for now.

I should have posted this earlier but Markyjoe streamed Ember Sigil a while ago, VOD here: https://www.twitch.tv/videos/519560042

So anyone playing this?

Still working on improvements. Got an idea for a really stupid gadget your staff users can use. 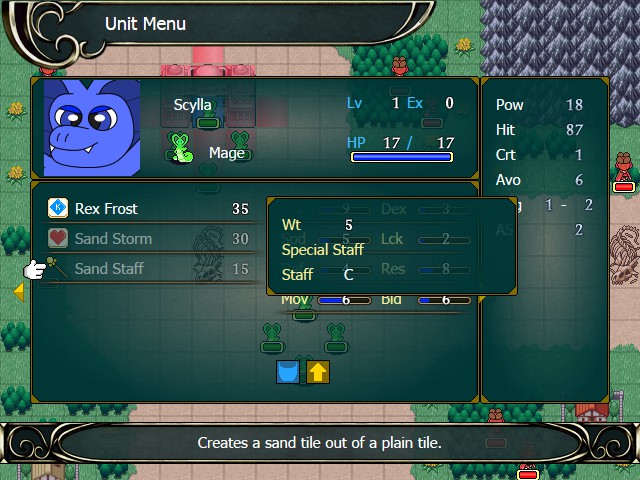 It’s a staff that creates Sand tiles! And that’s important because the Sand Storm spell can only work if you’re standing on a Sand tile. The range is 1-3 so it’s a pretty neat spell. There’s a similar staff and spell that does the same thing for Flower tiles. 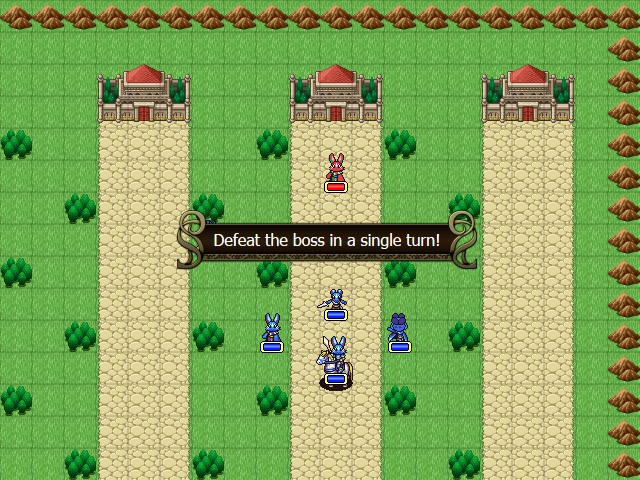 Hey remember that One Turn Clear hack of FE8 I made?

I’m bringin’ it back as an alternate game mode. That should be fun!

Some gameplay showing a couple changes to the presentation courtesy of Markyjoe1990’s great plugins for SRPG Studio.

So this is a new silly thing I’m trying out. Something comes out when you pop the balloon, but who knows what? ;D 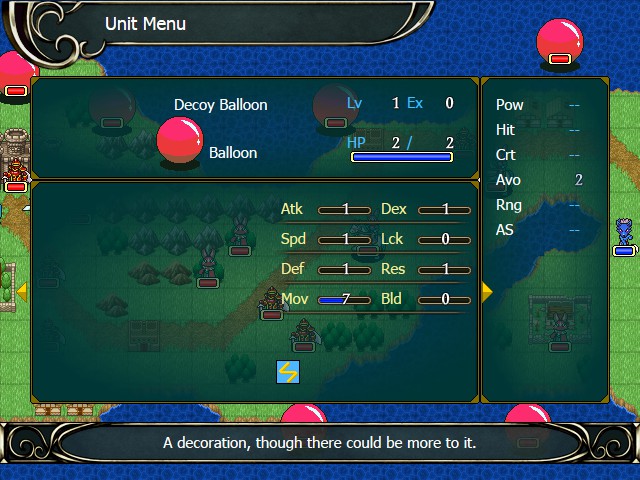 New spells! Each element of magic has a new spell available. Some are only useable on certain types of terrain, but that’s okay because there are also…

New staves! We’ve got staves that change the terrain to let you use the above spells. We’ve also got a new staff that makes a unit stronger, but also uncontrollable! Further, status staves have a new accuracy formula that should make them a lot more useable on both sides.

New items! The main additions for items are Dancer rings, which allow a dancer to cast a number of buffs on friendly units. You have to seek them out to find them, though. There’s also an item that makes your next attack a guaranteed hit!

New game mode: One Turn Clear! This is a puzzle mode where you must defeat the enemy commander in just one turn. You’ll have to really know how movement and other mechanics work to get the most out of this mode. There are twelve stages total.

New game mode: How to Play! For those of you who have not played strategy RPGs often, this map should get you acquainted with the basics in no time.

New game mode: “The Sigil of Justice”. This new, 12-map campaign takes place 200 years after the original campaign. It features a new cast of characters, some of whom will join or leave the party based on how you play. Some like it when you kill more enemies, others prefer simply capturing them instead. The ending will change depending on how you play, as well. Many maps have unique gimmicks that really explore what SRPG Studio is capable of!

Big thanks to everyone who made all this possible. Plugin writers, everyone in the SRPG Studio Discord/Wiki who lent me a hand, SapphireSoft for making excellent software to work with, and of course, this project wouldn’t mean much without you, the player. Thanks for playing!

Title Theme and other music