So what do you think of FE: 3 Houses

Seems interesting.
Nice to have a continent that has a name for once (looking at you Fates and Warriors)

lovin the art style personally, except for a few instances, but overall strong showing on that front. looks like theres a heavy focus on customization for individual units skills and stats this time too which seems interesting.

EDIT: one of those instances of questioning the art design was the female avatar outffit which is just… like did it have to be sexy teacher themed?

Don’t think there’s any character creation, just a choice of male or female.

It looks enjoyable, did not really feel like the usual Fire Emblem game, more like a Persona game with the art style and classroom activities/social links, a game series I wish would come to the Switch anyways. I like the whole build the units you want though I can see why it may be bad because it could require less strategy such as with Awakening when everyone built sorcerers with galeforce. Hopefully no Mary Sue? I’ll be going Team Black Eagle 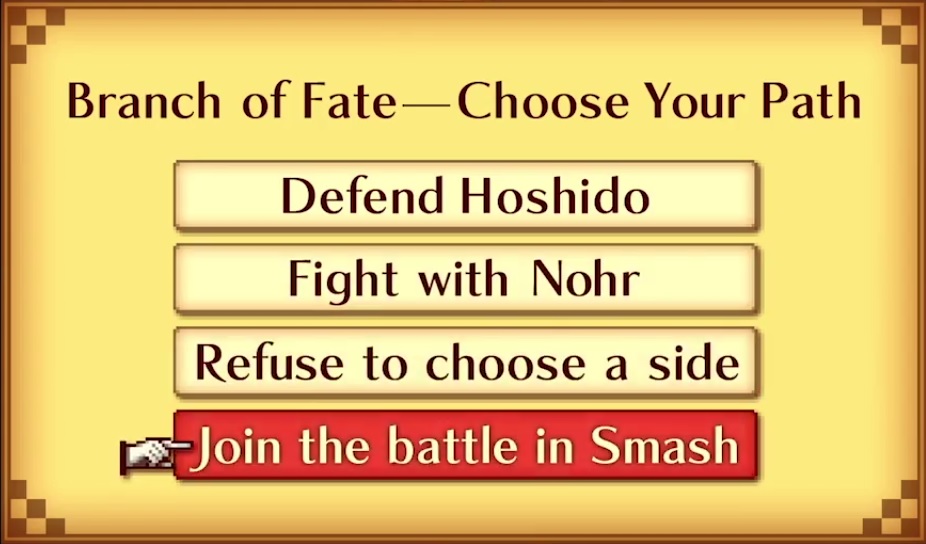 This seems to focus heavily on customization and training of units to be promoted which is a unique concept, but I wonder how it works. Do you have to train a mercenary in axe ranks early to get access to Hero promotion? All the different weapon icons are described, and the ‘flag’ icon is for Authority, so is that ‘Dark’ magic, or commands like ‘Rally’? Also, fists. That’s a thing, they’re a weapon type now. (Are fist units going to be called monks?)
The thing I’m worried about is that units might just lose their niche if now every unit can become every other unit.

The storyline looks neat, but … yeah, they seem to be going for a ‘Choose 1 of 3’. Hopefully this is just a multiple ending thing and not a ‘buy 3 games thing’ like Seal said. And the main character is now an Ike clone. You may disagree with this. But he has a sword, a dad who leads a mercenary team, and cool powers. Byleth is Ike.

The thing I’m worried about is that units might just lose their niche if now every unit can become every other unit.

That’s not necessarily a bad thing, so long as the units can be themselves. While there’s still some kind of reclassing-type thing going on with the Exam stuff, I’ve always found it silly that, for example, Cherche’s background specifically notes that she was a Cleric before becoming a Wyvern Rider, and yet, due to FE’s class system, she has to reclass just to have access to something that she’s already been trained in previously. With what Three Houses is doing now, it seems like that would be accounted for at base.

I found a lot in the trailer that sparked ideas for my own machinations, which was nice (but time-consuming to document - seriously, took me around 2 hours to compile my thoughts on a 5 minute trailer and the press text and screenshots on the official website…) and while I take umbrage with certain aspects - the tropey mystical JRPG protagonist “you’re special and that’s why you’re the hero/professor” thing, as well as only being able to apparently support/teach a single house (why? you’re a professor, you should be teaching everyone…) - I was legitimately impressed with how it seems like they’re evolving the series, at least mechanically. While it’s not something that can probably stick around long-term, due to how things seem to really be structured around your position as an instructor, being able to guide and choose how units are built out gives me a very Valkyria Chronicles II vibe, which is great, since the class/character system (including upgrading) in it was significantly better than the rest - must be something with Academy settings, I guess.

I’m super behind on actually playing FE games that I own (heck, I’m super behind on playing games period), though, so I don’t think Three Houses is going to be anything I go out and pick up early - the special edition doesn’t have any gated content like Fates did (well, for those of us still living in bumsville nowhere with internet speeds that should be criminal these days, having entire games be DLC is basically like gating content) and even if there’s an Awakening-like shortage of physical copies at launch, by the time I’d be ready to jump in, stock shouldn’t be an issue. But, I’m definitely looking forward to see more of the game and some of the mechanics that we haven’t really gotten a lot of details on yet.

I can see people complain about: ‘Oh, great its another wifeu FE game where the goddess is a little dragon girl loil’

Overall its an interesting game idea, can’t wait to see how it plays

Choose where to spend time and money 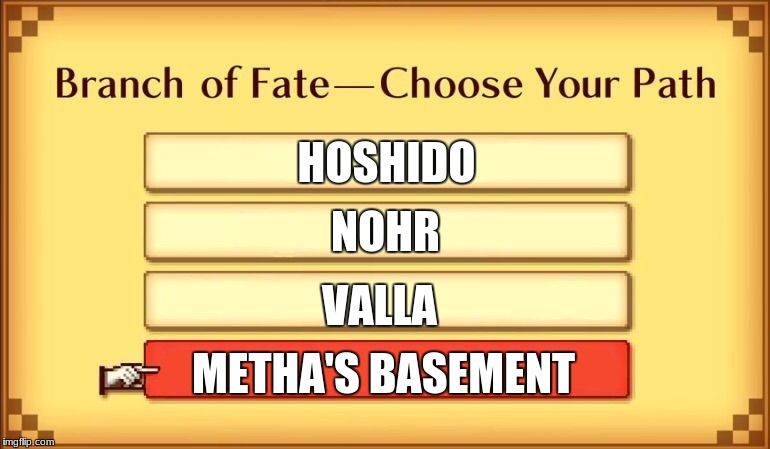 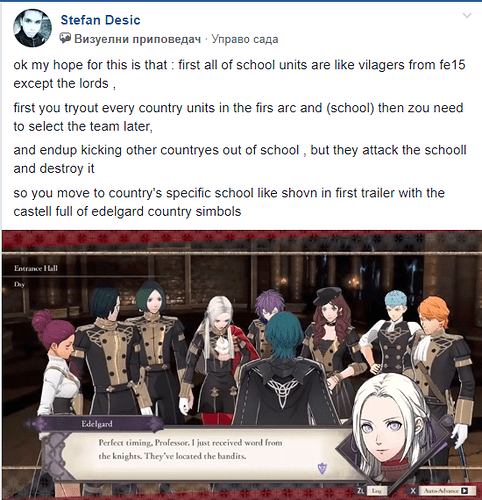 Reach for my hand
I’ll soar away
Into the darkness
The crests are to blame!

We need a hero- LIKE IKE.
(Changes to the tune of Eternal Bond out of nowhere)
HE’S BACK AND HAS A PHD
HIS CLASS IS CALLED BADASS
HE SENDS THE KIDS TO FIGHT TO THE DEATH
AND NOBODY BATS AN EYELASH

I’m happy that there is worldbuilding. The series has been leaning towards more heavy customization for years now, so that’s to be expected at this point (as much as I dislike customization since it eventually leads to everyone being the same when playing optimally)

Hoping the core battles don’t deviate too hard from formula.

Getting serious Tellius vibes from the visuals, which I’m all for. But overall it feels more generic JRPG and less distinctly FE so far, but there still isn’t a lot of info to go on.

Cautiously optimistic for something different! Even though I selfishly just want more GBAFE 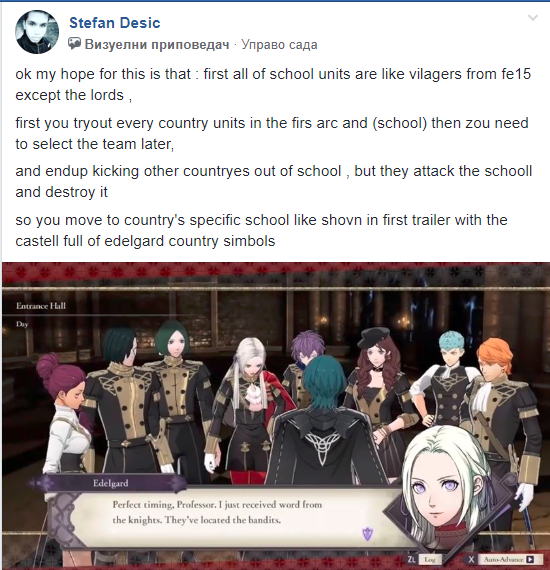 Watch as you deport foreign school students out of the school grounds
and also build a wall and have them pay for it.

Then a Revenant Apocalypse happens and
the game becomes a Highschool of the Dead prequel.

I really liked what they showed us. I’m worried about the story, because so far we never had a real headquarter like the school now. But hey, the church seems to be the evil fraction in all this and they reside in the school too, so I think there could be coming something great

It seemed like every charackter starts as a “student” class and specializes later. like the villigers in echoes and I love to be able to set the classes. that way I’m not stuck with a great character in a bad class

I’m looking forward to it and I was really happy.
(but I hate the protagonist and his stupid outfit. edgelord vibes. disgusting)

I don’t really like the direction of this game, nor the aesthetics.

The story seems to be an extended cut of the Kingdom of Izumo from Fates.

At least we’ll have plague doctors.